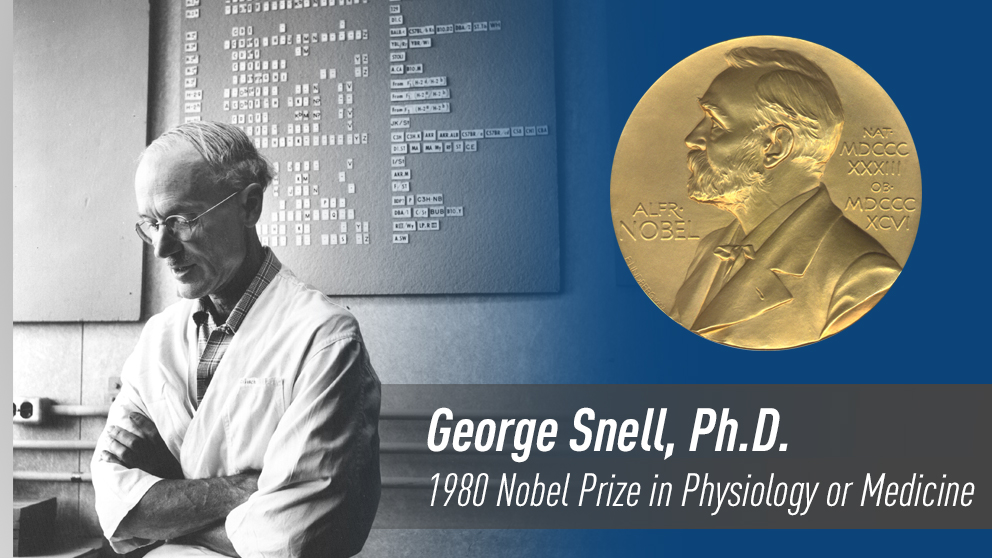 The Jackson Laboratory is now the owner of former JAX Professor George Snell’s 1980 Nobel Prize in Physiology or Medicine. The medal, which belonged to Snell’s family, was sold at auction in Los Angeles on October 28 and will soon be publicly displayed at the JAX Bar Harbor headquarters.

Nobel laureates each receive a gold medal along with a cash award. This acquisition will provide the final “homecoming” of the original Nobel medal to the place where the science was created.

I see this Nobel Prize to our professor George Snell as an inspiration to our scientists and our community, and we couldn’t be prouder to display the medal at JAX.

Snell shared the 1980 Nobel Prize for the work he had conducted nearly four decades earlier at JAX, establishing the genetic factors that govern the body’s ability to distinguish the difference between its own tissues and foreign invaders—work that paved the way for life-saving organ transplantation. It is estimated that more than 150,000 people receive organ transplants worldwide each year.

“We are honored to bring George Snell’s Nobel Prize medal home to JAX where he made these groundbreaking discoveries. This medal highlights JAX’s tremendous impact on human health and the incredible research that continues in his footsteps to this day,” said JAX President and CEO Edison Liu, M.D. “I see this Nobel Prize to our professor George Snell as an inspiration to our scientists and our community, and we couldn’t be prouder to display the medal at JAX.”

Snell was among the first scientists to join The Jackson Laboratory, in 1935. By 1944 Snell and other JAX scientists had established that genes controlled the immune response: Tissue transplantation from one mouse to another was successful only when both mice were from the same inbred strain. But what were these genes, and where were they located on the chromosomes? Snell made this his life’s work.

Today to study the effects of a gene in health and disease, it’s possible to engineer a genetic change in a single generation of mice, using technologies such as CRISPR-Cas9. But in Snell’s day, the only way to isolate a specific genetic variant was by cross-breeding mice over multiple generations, a process that often took years.

And in the days before genetic sequencing, mice were a “black box,” genetically speaking. You couldn’t tell just by looking at a mouse whether it was carrying the invisible genetic trait you were looking for — in Snell’s case, genes that confer immune resistance — until you actually did the experiments, such as to see whether a mouse rejected tumors or other tissues from another animal.

But sometimes the early geneticists were lucky, and the gene for an invisible trait was passed along with a visible physical trait such as coat color. And in this way, Snell was lucky: His very first cross yielded a “clear and close association” of tumor rejection or acceptance with a dominant inherited trait, a loop or kink about halfway down the length of the tail, known as a fused tail.

Snell was an avid gardener who shared his produce bounty with his lab colleagues, and a generous mentor to generations of scientists. Lauded by all who worked with and around him as both brilliant and humble, Snell is acknowledged worldwide for establishing the foundation of immunological research. He died in 1996.

You can learn more about George Snell and the gold medal in an article published in the Mount Desert Historical Society magazine Chebacco, Volume XIX, 2018.