When kids get cancer 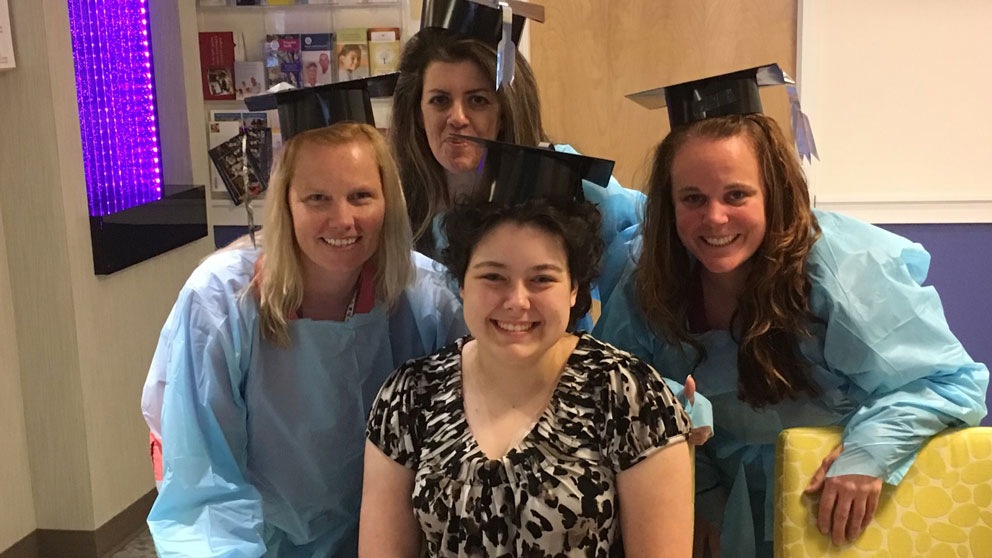 She didn’t see it coming.

On April 14, 2015, a volleyball smacked 17-year-old Lauren Loisel right in the forehead. “I got a concussion,” says Loisel, now 23. “As a softball player I had had my share of concussions, but this was the worst one I’d ever experienced. I had horrible light sensitivity, and I threw up a couple of times.”

Instead of recovering, Loisel developed other, more troubling symptoms by the end of that month. “I started to lose a significant amount of my vision, and a couple of times my legs gave out under me.” By about four weeks after the accident, she says, she was almost completely blind.

An ophthalmologist observed swelling around Loisel’s optic nerve. And at Maine Medical Center, she says, she received her diagnosis: “You have a three-inch glioblastoma in your right frontal lobe.” The next day she underwent surgery to remove the glioblastoma, a type of tumor that forms in glial tissue, non-neuronal cells that provide a support system for the nervous system.

Kids aren’t supposed to get cancer. Their robust immune systems can take on almost any germs on the playground, they heal incredibly quickly, and the DNA in their fresh young cells has not had time to accumulate cancer-causing mutations from environmental factors.

Working with members of the pediatric oncology community has given me a new appreciation for how different it is to treat children with cancer.

And in fact, childhood cancers are fortunately quite uncommon. Only about two percent of new cancer diagnoses in the U.S. are for people younger than 30, and less than half of one percent for kids under 10. About a third of pediatric cancers are leukemias, and advances in treatments over the past decade have had a dramatic impact.

“Mercifully, in pediatrics our cure rates are much higher than they are in the adult world,” says Stanley Chaleff, M.D., with Maine Medical Center’s Maine Children’s Cancer Program in Scarborough, Loisel’s oncologist. “For the most common pediatric cancer, which is acute lymphoblastic leukemia, cure rates with traditional chemotherapy are well over 80 percent, with some subgroups up above 95 percent.”

But for the other two-thirds of pediatric cancers, it’s that rarity that makes them much more difficult to treat. Brain tumors, and solid tumors arising in different organs, vary greatly in type, aggressiveness and outcomes.

“The types of cancers that kids get are totally different than the types of cancers that adults get,” says Steven DuBois, M.D., M.S., director of experimental therapeutics in the pediatric hematology and oncology department of Dana-Farber Cancer Institute in Boston. “Kids tend to get what we call embryonal tumors, which grow in immature tissues. It’s normal developmental biology going awry.”

Childhood tumors tend to be driven by a single, powerful genetic alteration.

Adults, on the other hand, tend to get carcinomas, cancers that form in epithelial layers like the lining of the colon or breast ducts. “Carcinomas develop over time,” says Alanna Church, M.D., associate director of the laboratory for molecular pediatric pathology at Boston Children’s Hospital. “The cells accumulate multiple mutations over the person’s lifetime, and at some point they tip over into cancer.”

Because adult cancers are so much more common than pediatric ones, there’s a great deal more known about them. Over the past decade, the genomic sequencing of thousands of tumors has been revealing mutations — alone and in combination — that can trigger cancer. And this vast and growing database provides a road map for oncologists to guide more targeted treatment of each patient’s cancer.

“In the adult oncology world,” Chaleff says, “more and more newly diagnosed patients may start off with some of these molecularly targeted therapies. That's not yet common in pediatrics at all.” 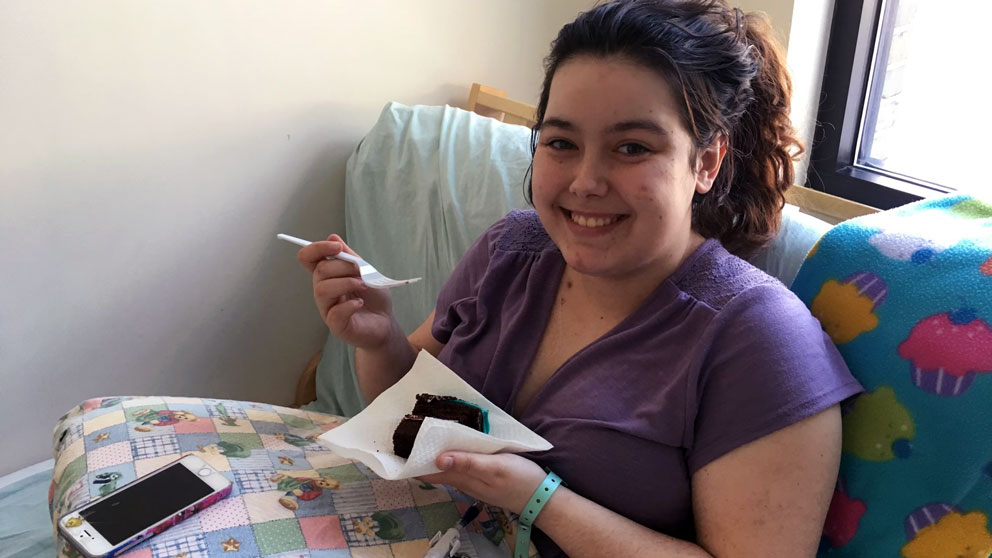 The Jackson Laboratory founded the Maine Cancer Genomics Initiative in 2016 with a grant from the Harold Alfond Foundation and has enrolled every oncology practice in Maine. Medical conferences called genomic tumor boards are at the heart of the initiative: Oncologists confer with pathology and genomic experts to recommend treatment based on genomic tumor test results.

Chaleff, Church and DuBois are among the pediatric specialists now collaborating with the MCGI, in a new effort launched in early 2020 aimed at providing more targeted treatments to children with cancer. So far seven pediatric patients have been enrolled – a small number but representing nearly 10 percent of the pediatric cancer cases in Maine.

“Working with members of the pediatric oncology community has given me a new appreciation for how different it is to treat children with cancer,” says MCGI Medical Director Jens Rueter, M.D., who typically moderates the genomic tumor boards and oversees the enrollment of patients into the MCGI. “They’re not just little adults. And because of the rarity and individuality of childhood cancers, and because there may be only one standard of care available for the more kinds of cancer, these oncologists are always looking for ways to individualize treatment for every patient. That fits perfectly with MCGI’s mission.”

About a year after Loisel’s brain surgery, she received another diagnosis, this time for neurofibromatosis type two (NF2), a genetic condition that raises the risk for tumors of the nervous system. “I had three of the five clinical criteria for NF2,” she recounts, “the brain tumor, the café-au-lait spots I have all over my skin, and a little fibroid tumor in my forearm.”

“Basically,” Loisel explains, “having CMRDS means that my body doesn’t recognize the difference between normal and cancer cells. My body looks at cancer cells and says, ‘You come and join the party!’ And I’m like, ‘No, don’t, please don’t join the party!’”

Chaleff put Loisel on a program of frequent screening. Sure enough, Loisel says, “they found three masses in my colon. So I had to leave college. I was put on IV chemo for three months because the cancer that was in my colon had jumped to my liver as well.” In May of 2017, Loisel underwent liver surgery, followed by another course of chemotherapy and colon reduction surgery.

Colon cancer, even when it occurs in a teenager, is considered an adult disease.  Chaleff consulted with oncologists who treat adults, but continued to treat Loisel at the Maine Children’s Cancer Center, an environment that was familiar to her and that also provides special support services to children and young adults.

There are no new spots, and the side effects [from the immune therapy] are very minimal, unlike the other chemotherapies I’ve been on.

Loisel went back to college, returning four times a year for brain scans. One of the scans showed “a tiny blip,” she says, and by early 2019 a mass about the size of a pea had grown. After the new mass was excised, Chaleff submitted it, along with a sample of the original glioblastoma, to the JAX CLIA lab for analysis and review by DuBois, Church and other participants at the MCGI genomic tumor board. He also started Loisel on a newly available immunotherapy.

“The MCGI genomic tumor board enabled us to have a better understanding of the tumor,” Chaleff said, “and reaffirmed our approach to treatment using a molecular targeted therapy. I've been truly impressed with The Jackson Laboratory in general, and the MCGI’s framework of genomic tumor boards in particular,” he says.

And, because both of Loisel’s parents carry half of the genes that contributed to her CMRDS, they are potentially at higher risk for cancer, and Chaleff has put them on a screening program as well. Loisel’s sister does not carry CMRDS-related mutations.

“They are a lovely family,” Chaleff says, “and she is truly a remarkable young woman.”

Loisel says Chaleff is “such a kind, thoughtful and caring doctor,” and says the immune therapy has been “phenomenal. It’s making my immune system do what it's supposed to do. There are no new spots, and the side effects are very minimal, unlike the other chemotherapies I’ve been on.”

Besides the tremendous medical challenges she has faced, Loisel had to deal with changing colleges when her program was eliminated, as well as the global pandemic. She has one more year of college before receiving her degree in social work, and looks forward to a career helping others.

“I try to take it all in stride,” she says with a smile.