Unlocking the secrets of endometriosis one cell at a time 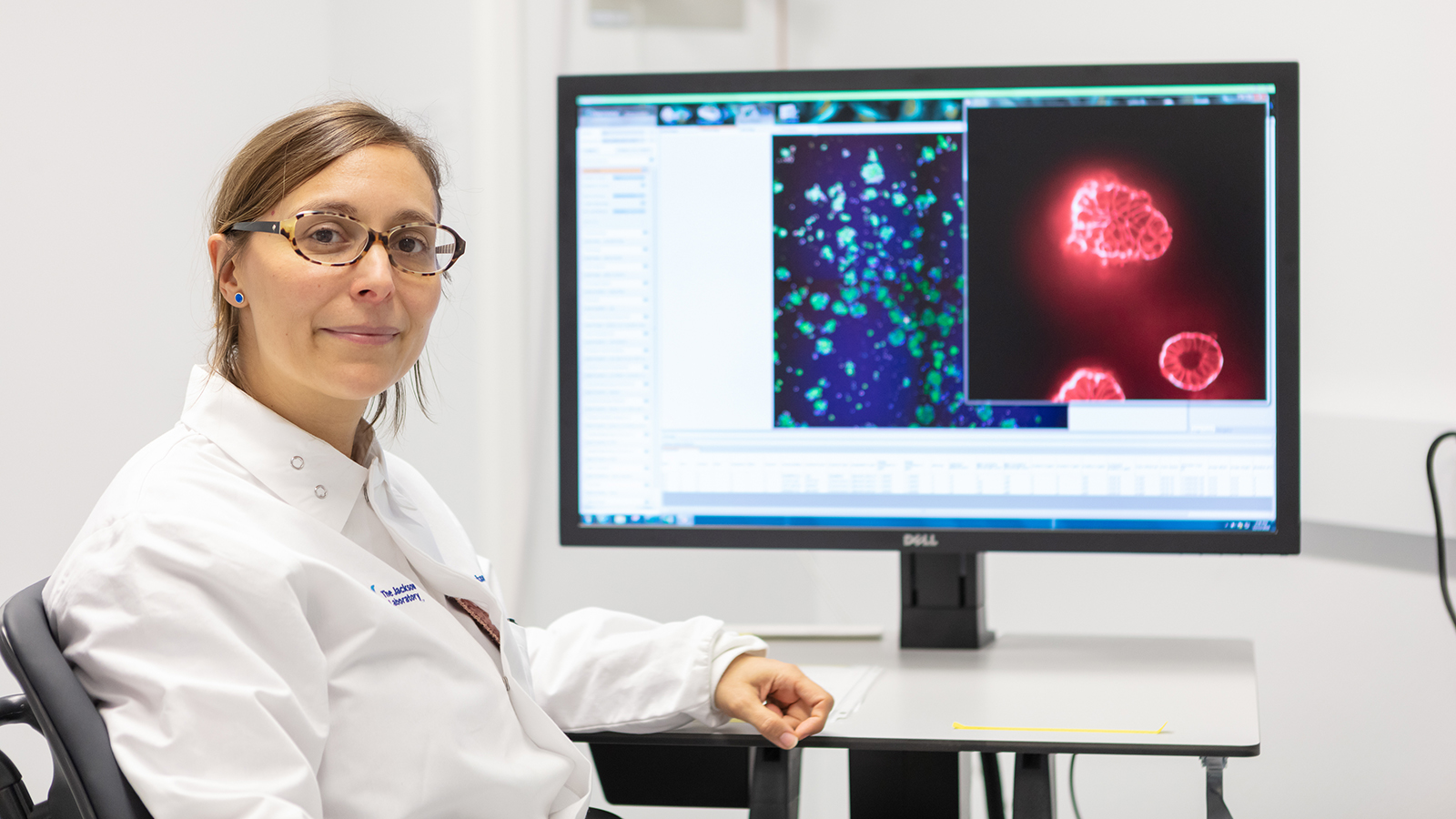 Elise Courtois, Ph.D., is an endometriosis researcher, but she doesn't know much about the disease. That's because no one knows much about endometriosis, which can cause debilitating pain and infertility in women as well as transgender and nonbinary people with uteruses.

So, Courtois's research goals read more like common Google search inquiries: What exactly is endometriosis? What causes this painful and chronic condition? How can we reliably diagnosis it? And how can we effectively treat it?

The scope of these questions reflects how little our understanding of endometriosis has progressed since scientists first discovered it in the 1860s. Despite affecting one in ten women during their reproductive years, patients and doctors alike often dismiss disease symptoms as severe period pain. Consequently, it has not received research attention or funding that matches the scale of its impact on human health.

Searching for answers about endometriosis

In partnership with UConn Health gynecologist Danielle Luciano, M.D., Courtois is studying tissue samples from endometriosis patients one cell at a time. By looking at the tiny building blocks of the human body, Courtois hopes to answer big questions about how endometriosis works and, ultimately, how doctors could best treat it.

In patients with endometriosis, tissue from the uterus lining—called the endometrium—develops where it's not supposed to. These tissue deposits usually occur on the ovaries, fallopian tubes, and around the pelvis, but endometriosis can also occur on other organs in the body. The tissue looks and acts like endometrial tissue, thickening and bleeding throughout a menstrual cycle.

I was shocked to hear her journey and how few options she had for treatment, and at the same time, how widespread endometriosis is.

The lesions of endometrial tissue can cause severe pain and the formation of scar tissue. Patients with endometriosis also often experience symptoms during their periods, including painful cramping, nausea, fatigue, and heavy bleeding. Between one-third and one-half of people with endometriosis have trouble getting pregnant. The disease also has a significant genetic component; someone with a close relative with endometriosis is seven times more likely to suffer from it, too.

In 1927, Dr. John Sampson developed the first hypothesis for the cause of endometriosis. Normally, the lining of the endometrium is released through the vagina during menstruation. Sampson thought that endometriosis is caused by retrograde menstruation, which occurs when endometrial tissue travels back up the fallopian tubes and builds up to form the lesions that characterize endometriosis.

Almost a century later, this is still science's best explanation for the cause of endometriosis. But while retrograde menstruation happens in nearly all people with uteruses, only 10 percent develop endometriosis.

"In endometriosis patients, there's something different about these cells that allows them to grow outside the uterus," Luciano says. "Whether that's an ability to avoid the immune system or there's something going on hormonally, we really don't know."

Courtois first learned about endometriosis from her childhood friend Patricia who suffered for years with heavy and painful periods.

"I was shocked to hear her journey and how few options she had for treatment, and at the same time, how widespread endometriosis is," Courtois said. Courtois knew then that she wanted to help patients like Patricia, and in 2018 that she was able to secure a rare grant dedicated to endometriosis research.

A single-cell approach to finding biomarkers

Courtois uses single-cell genomics to gain insight into how endometriosis cells are different from the cells that line a healthy uterus. Luciano sends samples of tissue that she removes during surgical treatment of endometriosis to Courtois's lab with the patient's permission. Courtois then analyzes each cell's transcriptome—the complete set of genes expressed by that cell. Using this single-cell approach allows Courtois to see subtle differences in the transcriptomes of different cell types.

The average endometriosis patient suffers for nine years without a diagnosis because it can be challenging to diagnose. Doctors can't identify endometriosis through a simple blood test. Only in advanced cases can doctors reach a diagnosis by using ultrasound or a physical examination.

Finding genetic markers that differentiate healthy and diseased endometrial cells could be vital in developing new ways to diagnose endometriosis before the lesions do much damage.

"This is a fundamental challenge," says Courtois, who hopes a diagnosis could one day come from an easy-to-obtain tissue sample. "We want to be able to diagnose endometriosis early so we can treat it early."

Single-cell technology can bring us the basic knowledge we need to characterize the disease and understand the mechanisms behind it.

But even with a confirmed diagnosis, Luciano says endometriosis is often a chronic condition.

"I always feel limited in the treatments I can offer patients," Luciano says. "I don't have a cure. So, I'm looking basically for the medication with the least annoying side effects."

Today, physicians usually prescribe birth control pills or other hormonal therapies, which can slow the progression of lesions by stopping a patient's periods. Luciano specializes in performing surgeries to remove lesions in patients who are hoping to get pregnant. Surgery is also an option for patients with more severe cases. Still, the operation often has to be repeated as the lesions grow back.

Courtois's friend Patricia has had several surgeries, but she continues to be plagued by symptoms. "After three surgeries and years of hormonal treatment, doctors still don't know how to solve any of her pain," Courtois says.

The ability to develop new treatment options for endometriosis patients is limited by how little doctors know about the disease. Courtois hopes that figuring out what goes wrong to cause endometriosis will pave the way for more targeted and effective treatments.

As an endometriosis researcher, Courtois must contend with the scientific mysteries of the disease and the ignorance of a scientific establishment that has long stigmatized and underfunded women's health research.

"Women's health is never and has never been a priority," said Luciano. Very little government funding has been directed toward research on the disease, even though there are more than 6.5 million endometriosis patients in the United States.

"The hospitalization, the surgeries, the lost ability to work, the emotional distress: the societal and economic impact of endometriosis is huge," Courtois said. "People need to realize how impactful this disease is not just for women, but for society as a whole."

While endometriosis should be considered a problem for all of society, it often falls to patients themselves to advocate for greater attention and funding for the disease. For example, Courtois's research was made possible in part by the advocacy of the grassroots group Endo What?, which championed Department of Defense funding exclusively for endometriosis research.

Nonetheless, while funding for endometriosis research continues to be an uphill battle, Courtois and Luciano have found incredible support from the patient community.

The hospitalization, the surgeries, the lost ability to work, the emotional distress: the societal and economic impact of endometriosis is huge.

"I have not had a single patient decline to participate in the study. When I tell them this research could lead to better treatments for their daughters, their nieces, their granddaughters, they all sign without question," Luciano said

Courtois, too, has done her part to support the endometriosis community in return. She takes every opportunity to raise awareness about the disease, including talking at JAX events like Women x Women and organizing an upcoming screening of a documentary made by the advocacy group Endo What?

Courtois is also trying to address inequities that affect the justness and quality of endometriosis research. For example, patients with marginalized identities, especially women of color, are less likely to access diagnosis and treatment for endometriosis. Because of this, endometriosis research studies disproportionately enroll white patients.

"That's not a real reflection of the population suffering from this disease, and that is a real issue," Courtois said. As a result, she and Luciano actively recruiting a racially and ethnically diverse pool of research participants for their study.

But Courtois is quick to defer praise for her work outside the lab to bring attention to the need for more endometriosis research.