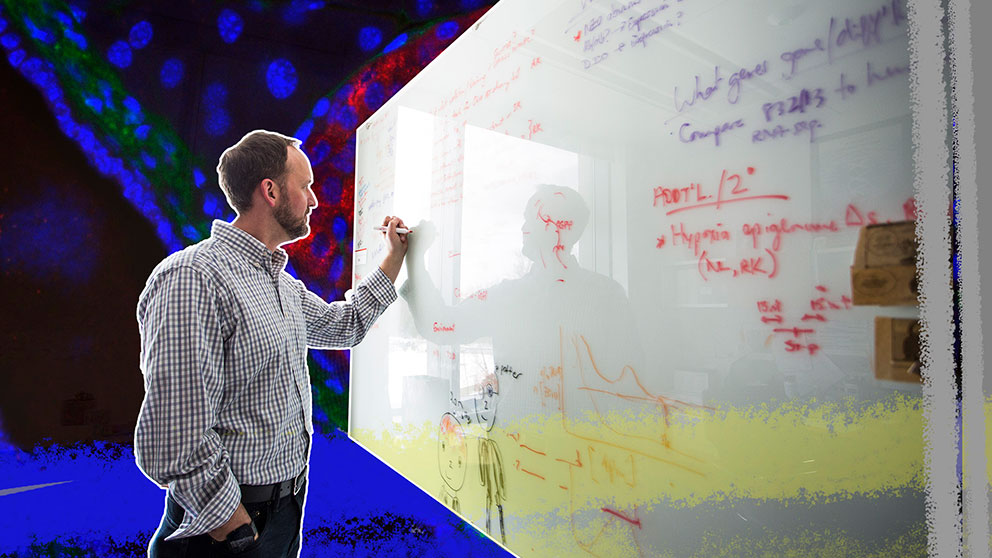 Type 2 diabetes is a worldwide epidemic. Incidence has quadrupled since 1980 to more than 422 million people — 34 million in the U.S. alone. Current therapies are not sufficient to stop the disease from progressing and causing subsequent medical problems that may include vision loss, heart disease, stroke, kidney failure, amputation of feet or legs, and premature death.

There’s a long list of risk factors for type 2 diabetes. Yet even someone who ticks most of the risk boxes (i.e., over 45 years of age, inactive and overweight, with fat distributed in the midsection) may not develop the disease. And someone younger, thinner and fitter could wind up with a type 2 diabetes diagnosis. It’s long been clear that genetic as well as environmental factors are involved — a family history of type 2 diabetes is another red flag — but what are they?

Stitzel is zeroing in on genetic mechanisms that could explain why some people are more susceptible to type 2 diabetes than others. He studies how genetic variations in the human population affect the resilience and stress responses of islets, clusters of cells in the pancreas that include the insulin-producing beta cells.

Islets process the glucose (sugar) in your bloodstream. When cells stop responding normally to insulin — a condition called insulin resistance — the islets turn up insulin production. If even this higher quantity of insulin doesn’t overcome insulin resistance, your blood sugar rises, leading to dangerously high levels of glucose in the blood and, ultimately, type 2 diabetes.

The National Institute of Diabetes and Digestive and Kidney Diseases has made a four-year grant totaling $3,155,285 to Stizel’s lab to study the genetic regulation of islet responses and to determine how genetic variants alter these responses to contribute to islet dysfunction and type 2 diabetes.

Specifically, the Stitzel lab is focusing on genetic control of endoplasmic reticulum and lipotoxic stress responses, which are key physiological processes that contribute to islet dysfunction and failure.

Stitzel says that the study “will reveal novel therapeutic targets, and guide strategies for subsequent studies manipulating these responses to prevent or treat islet failure and type 2 diabetes.”