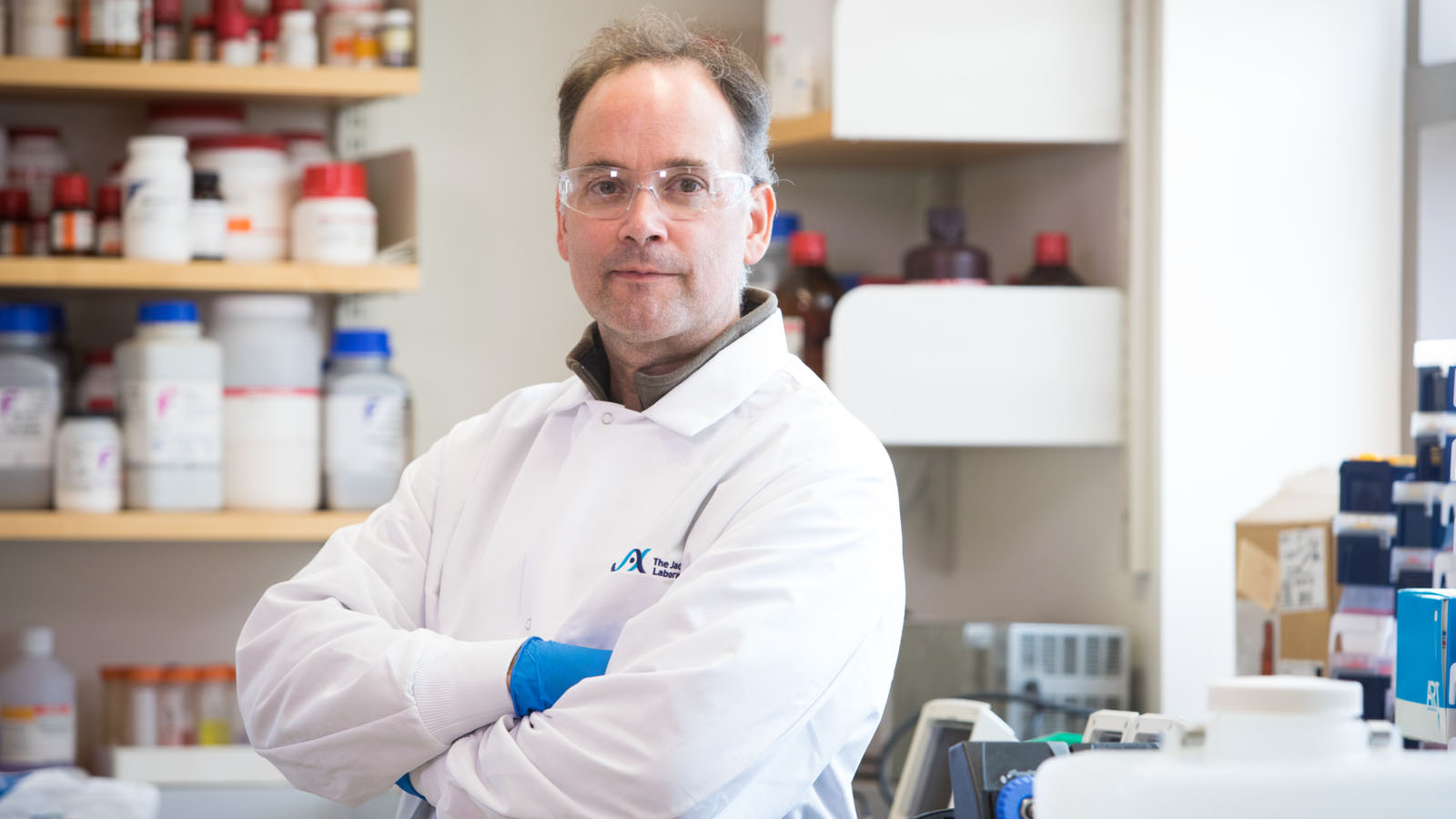 From mouse model to gene therapy, Rob Burgess is working to translate basic research to the clinic.

Ancestry.com won’t help you find your common relative with a mouse — humans’ evolutionary path diverged from that of mice about 65 million years ago. But that doesn’t mean we don’t share family traits with the little mammals, including all of our physiological systems and most of our genes.

So, mice can develop the same diseases as humans, for the same genetic reasons. Because they breed prolifically, and are small and easy to maintain in laboratory conditions, mice were the natural choice for study by the first mammalian geneticists in the early 20th century. And today mice are the premier model for the entire spectrum of biomedical research, from basic investigations into the role of individual genes to the design of targeted therapies for human diseases.

You can find that full spectrum in a lab in Bar Harbor, Maine. Rob Burgess, Ph.D.Studies the molecular mechanisms of synapse formation, development and maintenance in peripheral neuromuscular junctions and retina.Rob Burgess , a professor at The Jackson Laboratory (JAX), is now developing a gene therapy for a rare variant of an inherited form neurodegenerative condition called Charcot-Marie-Tooth (CMT) disease, based on discoveries he made in mice some 15 years ago.

“CMT is actually a collection of inherited diseases of the peripheral nervous system,” Burgess says. These hereditary neuropathies are neurological disorders that cause damage to the peripheral nerves, the bundles of nerve cell fibers that connect the brain and spinal cord to muscles and sensory organs. “The neuropathies in the CMT category involve more than 100 different genetic mutations, with varying impact on the severity of symptoms, which include sensory deficits and muscle atrophy.”

In 2006, in a paper in the journal Neuron, Burgess published his lab’s discovery of a mouse model with the mutation in the gene known as GARS (for glycyl-tRNA synthetase) corresponding to the mutation in patients with the category of CMT known as CMT2D. GARS, like other tRNA synthetase genes, is essential for protein production in every cell of the body. So it might be expected that a mutation in GARS causing CMT2D in mice would involve failure of protein production. Instead, Burgess demonstrated that the mutation had a destructive role specifically targeted to peripheral neurons.

Collectively, the diseases known as CMT may be the world’s most common inherited neuromuscular disorder, with an estimated incidence of one case per 3,000 people. But many of the subtypes represent tiny populations—CMT2D, for example, is rarer than one in 250,000. Burgess’ lab works to understand the genetic mechanisms involved in CMT2D, with the long-term goal of finding ways to prevent and treat all CMT patients.

Fletcher’s granddaughter, Caroline, was a doe-eyed two-year-old who was not keeping up with the first steps of her twin brother, Henry. A genetic test revealed that Caroline had been born with the CMT2D mutation.

Burgess’ work in CMT2D put him at the top of Fletcher’s search results. Burgess responded to Fletcher’s initial email inquiry with sympathy, expressing regret that he couldn’t offer any immediate help and recommending that Fletcher reach out to clinical researchers who work with patients, not mice.

Soon Fletcher would connect with Scott Q. Harper, Ph.D., a gene therapy researcher at Nationwide Children’s Hospital in Columbus, Ohio. It took some time, but ultimately, Harper would team up with Burgess in the hunt for a genetic therapy for CMT, including the version Caroline carries.

By 2019, Burgess and Harper would coauthor a paper in the Journal of Clinical Investigation in which they demonstrated an effective gene therapy in a mouse model engineered to carry Caroline’s mutation. As promising as this proof of concept is, there are currently huge regulatory and financial hurdles to overcome before the treatment can be administered to Caroline. Together with Fletcher, the researchers are reaching out to foundations set up to expedite gene therapies.

When Burgess talks about Caroline, now nine, his face clouds with concern. “She’s a really bright kid, and she reads well above grade level, but she’s confined to a wheelchair,” he says quietly. “We want to help her now, to see if we can stop her disease from progressing.”

Principal investigators are often pulled in many different directions and sometimes aren't able to provide 100 percent focus to all things. Not Rob. One of his special qualities is presence.

Fletcher says, “It was evident after my search for help on a rare problem that Burgess was the go-to person. His track record of excellence in the field was clearly the right choice for our family. As important and maybe even more of a factor was his compassion for our family and his passion for what he was doing to help us. We are eternally thankful for Dr. Burgess and the Jackson Lab team.” Any and every discussion about Caroline’s story, he says, “always includes the Burgess-JAX factor.”

“It has been an absolute pleasure to collaborate with Rob,” says Harper, who is a principal investigator in the Center for Gene Therapy at Nationwide Chldren’s Abigail Wexner Research Institute in Columbus, Ohio, as well as professor of pediatrics at The Ohio State University College of Medicine. “Seems like he's always the smartest person in the room and yet disarming and humble. Principal investigators are often pulled in many different directions and sometimes aren't able to provide 100 percent focus to all things. Not Rob. One of his special qualities is presence.”

From Michigan to Maine

Burgess grew up in Midland, Michigan, a chemical-company town, with a Ph.D. chemist for a father. “Most of my friends’ parents were scientists,” Burgess says, “and it was sort of a foregone conclusion that I would go into science too.” He credits an inspirational AP science teacher for steering him in the direction of biology.

It was during a summer job after his first year of college at Michigan State University that the science bug really bit Burgess. He was in charge of an agricultural study to count mites on treated and untreated trees. “There was something about collecting the data and seeing the results that I found really exciting,” he says with a laugh. “So I found out I really like doing an experiment, and it almost doesn’t matter what it’s about.”

Louise Lopez, office administrator of JAX Scientific Services, was Burgess’ administrative assistant when he first joined the lab, and they are close friends to this day. “One of my strongest memories of working with Rob,” Lopez says, “was when his sons were young. He would take an evening break to head home for dinner with Dawn and the boys, and then later come back to campus to continue his work through the evening. That shows his dedication to both research and family.”

Lopez also points to Burgess’ active service in multiple JAX committees over the past two decades. “He is an amazingly good citizen of the Lab,” she says.

A visitor to Burgess’ office at JAX may wonder, “How does he find anything?” Extravagant piles of papers and journals swell over every horizontal surface. Kon-Mari acolytes may cringe and look away, but Burgess swears he knows where everything is, and he’s in good company: Thomas Edison, Albert Einstein and Steve Jobs were all famous for their super-messy desks.

In contrast, Burgess’ personal appearance is casual but spruce, usually dressed in the de facto Bar Harbor uniform of sneakers, jeans and half-zip fleece pullover. He’s energetic and boyish despite the touch of gray in his hair and having raised two college-age sons with his wife Dawn.

In person, on the phone, or via email, Rob is always attentive, knowledgeable and thoughtful, whether the topic is science, college basketball or where to find the best boar-hunting terrain in Texas.

Over the years Cox and Burgess have coauthored several papers, and shared lab space, mouse models and ideas. “Rob has been an amazing colleague and friend,” Cox says. “We have overlapping scientific interests in neuromuscular disease research and in making a positive impact on the educational opportunities at JAX.” The two lab teams join up for holiday parties and just joking around.

When a high-impact journal rejects a research paper submission, the reason cited is often that the paper would be more suited to “a more specialized journal.” Cox relates that a few years ago Burgess decided to have fun with this polite obfuscation, and solicited the JAX faculty for submissions to a new scientific journal called, of course, A More Specialized Journal.

Living year-round on the Maine coast isn’t for everybody, but Burgess’ Michigan childhood prepared him for the outdoor life. He sometimes commutes by bicycle and enjoys fishing, hunting and other active pursuits. Indoors he’s a connoisseur of food, wine and spirits.

His clinical collaborator Harper observes, “In person, on the phone, or via email, Rob is always attentive, knowledgeable and thoughtful, whether the topic is science, college basketball or where to find the best boar-hunting terrain in Texas. We are both native Michiganders, and as an alum of the University of Michigan, the only negative thing I can say about Rob is he earned his undergrad degree from the hated rival, MSU. Nobody's perfect.”

Back in the lab, Burgess is focusing on approaches to understanding the mechanisms of the whole category of CMT diseases. In 2020 he was awarded a highly prestigious Javits Award from the National Institute of Neurological Disorders and Stroke, a seven-year research grant given to scientists “for their superior competence and outstanding productivity.” Under this grant, Burgess will determine how dominant mutations in glycyl tRNA synthetase cause peripheral axon degeneration in CMT, work that may offer new direction for treating CMT as well as other common disorders with related complications, such as diabetic or chemotherapy-induced neuropathies.

Burgess has also recently achieved a rare two-fer, publishing two papers in the same edition of the top-tier journal Science. The journal’s editors also solicited a commentary article on advances in translational research in CMT, citing work by Burgess and others.

The collegial Burgess says he appreciates having worked for two decades in the JAX community, including fellow researchers who use mouse models to understand disease. He has also found the CMT research community especially welcoming. “Some fields, representing more widespread diseases, tend to be factional and ego-driven. The Charcot-Marie-Tooth crowd is the nicest, most inclusive group of people. And that’s made it a lot more fun.”