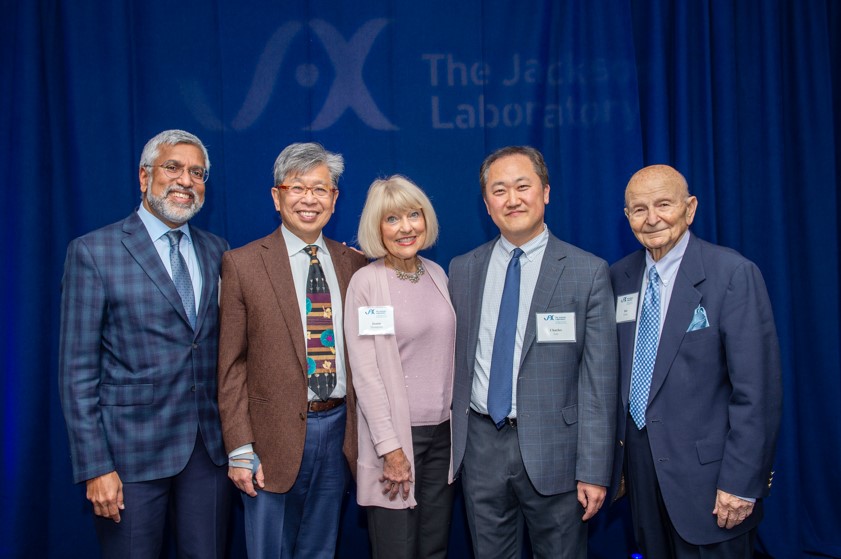 
Charles Lee, Ph.D., FACMGThe study of structural genomic variation in human biology, evolution and diseaseCharles Lee , Ph.D., FACMG, scientific director and professor at The Jackson Laboratory for Genomic Medicine (JAX-GM), has been named chairholder of The Robert Alvine Family Endowed Chair, established with a $1.5 million gift (matched by JAX) from Robert Alvine, chair emeritus of the JAX Board of Trustees.

“Dr. Lee is a renowned geneticist, a leader in translational science and a treasured colleague here at JAX,” said JAX President and CEO  Lon CardonResponsible for the Laboratory’s global vision, strategic direction, research and operations Lon Cardon , Ph.D., FMedSci. “I am doubly thrilled that Robert Alvine has made this generous gift and that this esteemed position has been granted to Dr. Lee. I know that he will utilize this honor to continue to drive the advancement of JAX Genomic Medicine in understanding the complexity of human biology and disease to drive medical progress.”

The gift permanently endows the leadership position at JAX Genomic Medicine in Farmington, Conn. The chair was established in honor of Professor, President Emeritus, and Honorary Fellow  Edison Liu, M.D.Conducts research focused on the functional genomics of breast cancer through an exploration of the entire genomic space.Edison T. Liu , M.D. and Auro Nair, Ph.D., executive vice president of The Jackson Laboratory and president, JAX® Mice, Clinical and Research Services. It is one of three newly established chairs recently announced at the Laboratory.

“I have great admiration for all that Ed, Auro, Charles, and the entire team at JAX have accomplished, and I am proud to have been among the first donors to provide philanthropic support for Ed Liu’s cancer research at JAX and for the chair named in his honor, now held by the director of the JAX Cancer Center,” said Alvine. “As Connecticut residents, my family and I are especially proud of the impact JAX is having here in the state, and

we are delighted that the Alvine Family Chair will be held by Charles Lee in his role as the scientific leader of JAX Genomic Medicine in Farmington.”

Lee joined JAX Genomic Medicine in 2013, after 14 years at Harvard Medical School and Brigham and Women’s Hospital and is responsible for the scientific direction and operational coordination of JAX-GM, where researchers focus on human genomics, complementing the Laboratory’s long history of mammalian genetics expertise. With 450 employees at the Connecticut campus, Lee also oversees 27 esteemed faculty who are investigating many aspects of human genomics and disease, including immune response, cancer genomics, the microbiome, and genome structure. Among the many accolades of the JAX-GM faculty, they have established (and lead) several National Institutes of Health (NIH)-sponsored research centers, sent mice to the International Space Station for genetic research studies, and successfully compete for over $40 million in federal research grants per year. During the pandemic, JAX-GM conducted over 1.6 million SARS-CoV-2 PCR tests in their CLIA-certified / CAP-accredited clinical diagnostic laboratory and continues to work with the State of Connecticut to actively conduct viral sequencing for the identification of new COVID-19 variants.

Lee is best known for his discovery that copy--number variation—a state in which cells have an abnormal number of DNA sections, which are often associated with increased susceptibility to disease—is widespread and significant in the human genome. In April 2020, Lee was appointed by Governor Lamont to be one of eight advisory members of the Reopen Connecticut Advisory Task Force and was later recognized by the Hartford Business Journal to be among the top 25 leaders in Connecticut who have impacted public health in the State. Consistent with the education component of JAX’s mission, Lee recently became a board of trustee of the Connecticut Science Center and contributed to the opening of their new exhibit, Genome in Me.

“I am humbled to be named chairholder of The Robert Alvine Family Endowed Chair, and am so grateful to Bob for his generosity and his steadfast support of JAX,” said Lee. “I couldn’t be more proud of the JAX-GM community and all of the work we are doing together to further genomic medicine. I know this gift will help us leverage our talents, technologies and research into continued major clinical impact.”