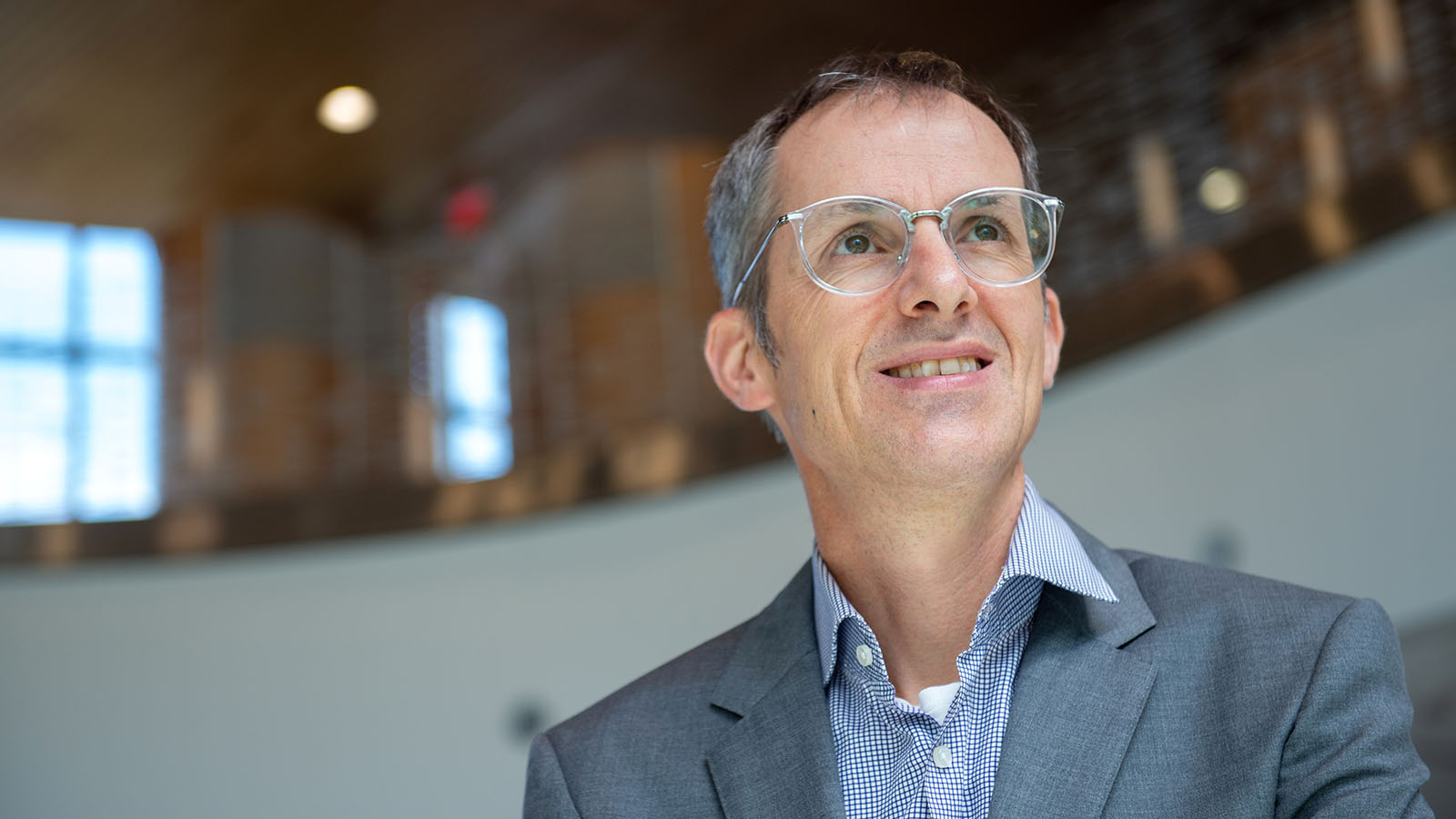 Roel Verhaak at The Jackson Laboratory for Genomic Medicine

There has been striking progress in cancer care over the past two decades. Many cancers can now be effectively managed, and patient prognoses have improved markedly overall. Unfortunately, however, some cancers remain incurable, with high patient mortality.

Gliomas, the most common malignant brain cancers, are among the cancers that have so far resisted medical progress. The resistance is literal, as at least some glioma cells are always able to evade frontline treatments, leading to recurrence, therapy resistance and lethality. Figuring out how to effectively target glioma for elimination is a demanding field that spans the medical spectrum, from basic research to drug development to patient engagement. And at the middle of the current surge of discovery is Jackson Laboratory (JAX) Professor Roel Verhaak, Ph.D.Brain tumors, sequencing, computational biology.Roel Verhaak , Ph.D.

Verhaak began his graduate studies in medical informatics, but soon pivoted to computational biology and cancer research. His background provides him with an appreciation of the value of basic research, yet with an end goal always in mind: improving patient care. Indeed, one of Verhaak’s latest projects illustrates how his scope extends beyond the lab to take on glioma’s many challenges. OPTIMUM (OPTimIzing engagement in discovery of molecular evolution of low grade glioma), recently funded through a four-year National Cancer Center grant, is not your typical laboratory research project.

Low grade gliomas (LGGs) are rare tumors, and relatively little is known about their biology or how to provide optimal patient care. While “low grade” may not sound all that dangerous, it’s relative. LGG patients do in fact have good prognoses in the short term compared to those with high grade gliomas. Unfortunately, however, LGG is a devastating diagnosis by any other measure. LGG always progresses and is uniformly fatal, with survival averaging about seven years. It also occurs in younger people than the more aggressive gliomas, with most patients diagnosed in their 30s and 40s.

OPTIMUM is a three-institution effort, and Verhaak is a co-principal investigator with collaborators from Yale University and the University of Colorado. The project will acquire samples from 500 patients, both at the time of LGG diagnosis and the time of recurrence, providing invaluable data to help figure out the mechanisms of recurrence. But the key aspect of OPTIMUM is patient engagement, working with participants so that they are active partners in the study, with a full understanding of its progress and outcomes. The patients in turn will provide important insight into how to improve their medical care.

“OPTIMUM will reach underserved patient populations in regions that are often overlooked in genomics and cancer studies,” says Verhaak. “We will empower them to understand their genomic data and what it means for their care, and they will teach us how to better help them.”

OPTIMUM will contribute significant amounts of data to another collaborative effort Verhaak has spearheaded: the Glioma Longitudinal AnalySiS consortium, or GLASS. Launched in 2015, GLASS brought together computational and bench researchers, pathologists and clinicians to help bridge the gaps between research and the clinic. Together, they are addressing a fundamental problem with glioma therapies: the tumors always evolve and develop resistance to treatment. But to learn how and why they are able to do so, you need to gain access to tumor tissue from multiple timepoints. That is a major challenge, especially for a less common cancer type. There are therefore more than 130 contributors to GLASS from dozens of institutions around the world.

We will empower them to understand their genomic data and what it means for their care, and they will teach us how to better help them.

By 2019, GLASS had acquired and analyzed glioma samples, DNA sequencing data and clinical annotations from 222 patients. In a paper published in Nature, on which Verhaak was senior author, they presented findings that were, on the surface, a little surprising. The driver mutations—that is, the mutations in oncogenes, specific genes that contribute to cancerous growth—found initially in the patient samples were also retained at recurrence. So, it appeared that not much was evolving at the individual gene level. Furthermore, the clonal architecture, meaning the presence and numbers of different cellular populations within the tumor, remained similar over time. The take-home message was that the differences between cells within the tumors develop early, and they involve mechanisms that are not captured by whole genome sequencing of the glioma cells. But what are they? To find out, it’s essential to investigate the basic biology of glioma in the laboratory.

Two major basic research programs in Verhaak’s lab are investigating the inner workings of glioma cells and how they evolve. As the earlier GLASS results indicated, the latest findings show the need to move beyond DNA to find what molecular processes makes glioma tumors so dangerous and impossible to eradicate.

One line of research explores a process that can help cells change and adapt with no changes to their DNA sequences: epigenetic reprogramming. Epigenetic marks are chemical compounds that can be bound to or removed from specific DNA sequences to help regulate gene expression. Using innovative single-cell analyses, Verhaak and his lab reported in Nature Genetics that a specific epigenetic process, methylation (DNAme), is altered in glioma cells, and more DNAme disruption is associated with more aggressive tumors. When the cells are subjected to stress, the DNAme disorder increases, which can lead to cell state changes and important differences between individual cells. It also makes some of the cells “plastic,” in that they can switch back and forth between specific cell states. The epigenetic changes provide cells with the ability to quickly adapt and survive external stressors, such as therapeutic agents. They may also explain one way that certain glioma cells are always able to survive front-line treatments.

“These findings are important for knowing how to develop more effective glioma treatments,” says Verhaak. “We have to account for cellular plasticity and block these adaptive pathways to overcome therapy resistance.”

Another important area of exploration involves extra-chromosomal DNA, or ecDNA. ecDNA are circular segments of DNA that are separate from chromosomes but can include genes and express them at high levels. If the genes are cancer-promoting, ecDNAs may play a role in cancer initiation and maintenance. Verhaak has shown that they contribute to many more cancers than previously thought, including gliomas.

Given that ecDNAs aren’t associated with the usual copying and segregating of chromosomes during cell division, it was also suspected that they might not be evenly distributed between daughter cells. Some cells might have many ecDNAs, others few or none, providing another important source of cellular heterogeneity—cell-to-cell differences—within tumors. Using a new method called ecTag, which Verhaak and his team described in a publication in Cancer Discovery, they were able to physically label and visualize ecDNAs in live cells for the first time. Their findings in a glioma cell line provide concrete proof that ecDNAs are indeed inherited unevenly, with the differences propagating through many cell divisions. They also found that the ecDNAs cluster in daughter cells and recruit RNA polymerase, an enzyme needed for gene expression, likely explaining why they frequently overexpress oncogenes.

“Observing the formation of ecDNA hubs that recruit RNA polymerase was an exciting part of the study,” says Eunhee Yi, Ph.D., a postdoctoral associate in Verhaak’s lab. “It provides a plausible mechanism to explain why the oncogenes on ecDNAs are expressed at such high levels and how they contribute to the diversity of cancer cells.”

Some cancer cells adapt quickly enough to resist even powerful treatments in unexpected and frustrating ways. Gliomas are particularly resilient and evasive. To treat or cure them, they must be encircled, leaving them with no escape. Verhaak is working to close the circle, in his laboratory and beyond.

The broad perspective is essential. GLASS is supplying the patient samples needed to track glioma’s evolution in the face of current real-world treatments. Its findings also help inform laboratory research into what makes glioma cells so hard to stop. These insights in turn reveal potential targets for better therapies. Finally, OPTIMUM takes a step forward with patient engagement to determine the best ways to actually deliver the therapeutics. Every piece is needed to finally make a difference in the care of those with gliomas and provide them with a promising path forward, where now there is none.