Genomic surveillance: Tracking the evolution of a pandemic

During the fall and early winter, as the COVID-19 pandemic worsened, concerning news emerged that went beyond the rising number of cases. New variants of SARS-CoV-2 were being identified as the virus mutated, and some of them appeared to change important properties of the virus. It’s a rapidly evolving situation, but the  The emergence of SARS-CoV-2 variants sparks concernMutations in SARS-CoV-2 are generating viral variants that change the properties of the virus and affect the response to the COVID-19 pandemic. variants of particular concern now include B.1.1.7 (U.K.), which has been shown to increase transmissibility, and P.1 (Brazil) and B.1.351 (South Africa), which may evade the immune responses generated by prior infection and, perhaps, some current vaccines. All emphasize the need for a coordinated program of genomic surveillance to track the current variants and find any new ones when and where they emerge. 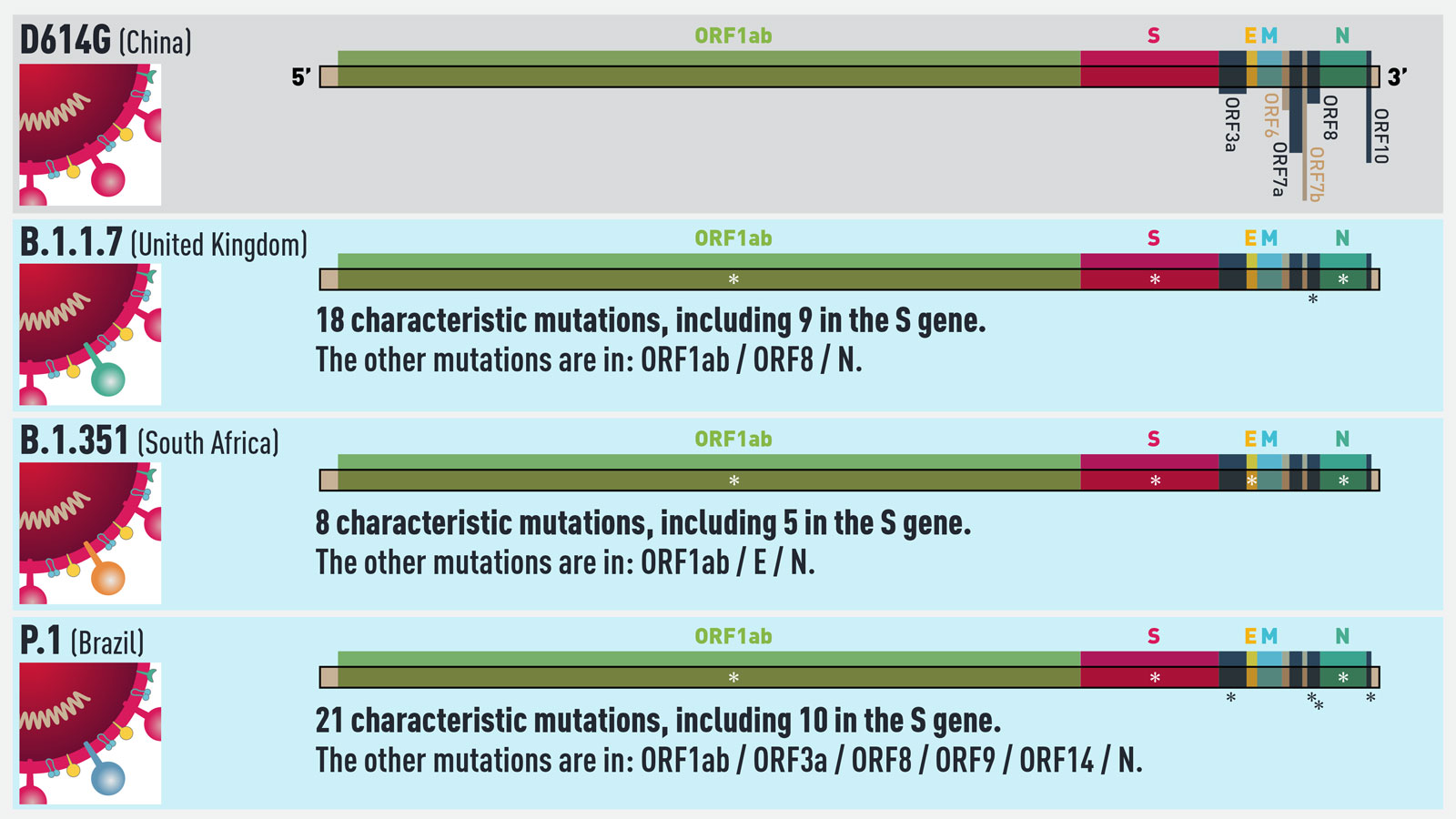 Genomic surveillance differs significantly from testing for COVID-19. The most common kind of positive/negative testing for the presence of COVID-19 is based on a process known as polymerase chain reaction, or PCR. The tests have probes that bind to specific genomic sequences that are unique to the virus. They’re then amplified and, if the virus is present, can be detected. But the test does not provide enough information to definitively identify SARS-CoV-2 variants or track their spread.

This is where genomic surveillance becomes necessary. Genomic surveillance is consistent, coordinated screening of positive samples at multiple sites within a country or region. Full sequencing of viral genomes is the cornerstone of surveillance efforts, as it reveals the full genome of the virus and provides a definitive look at what variants are present. It costs more and takes longer than other kinds of testing, but it is vital for spotting and characterizing new variants as they arise, a crucial part of the effort to control the pandemic. Targeted testing, developed specifically to identify and track previously identified variants present within positive samples, can also play an important role, particularly in conjunction with full sequencing. Targeted testing is inexpensive and fast, and it can be done at many sites to quickly identify the presence of particular variants. Samples that are identified as variants can then be fully sequenced for confirmation and full characterization.

The good news is that not every sample needs to be fully sequenced. Experts estimate that sequencing 10 percent of samples is highly effective, and just five percent of the positive samples, chosen at random, may be sufficient. That surveillance level provides a good look at the variant percentages in any one location over time and can track the spread of variants between sequencing sites. Unfortunately, the sequencing rate of positive samples within the U.S. as a whole still languishes below one percent, well below the level need to quickly and reliably track known variants and detect new ones as they arise.

The situation is likely to change for the better soon, however, as the importance of surveillance is becoming more widely recognized. And JAX is at the vanguard of the effort. In Maine, Assistant Professor  Ryan Tewhey, Ph.D.Identifying the precise genetic mechanisms for complex traits and disease risk Ryan Tewhey, Ph.D., leads a surveillance program in partnership with the State of Maine CDC that has established Maine as the second-leading state in the nation for viral sequencing, percentage-wise. The rate is currently below 2.5 percent, but the program has already identified the first incidences of B.1.1.7 in the state. In the near future, Tewhey’s goal is to exceed a five percent surveillance rate to effectively monitor the situation in the state. And JAX’s  Help for heroesCoronavirus testing at The Jackson Laboratory helps officials track and prevent transmission of COVID-19. To date, JAX has processed more than one million tests.COVID-19 testing laboratory in Connecticut, which has already processed more than 1.2 million samples using its PCR test for SARS-CoV-2 virus, is working to greatly expand genomic surveillance for Connecticut residents. Through sequencing of positive samples, the testing laboratory has already detected an increasing presence of the B.1.1.7 variant in the state, and it is working with local healthcare organizations to monitor the situation.

With vaccination rates climbing and infection rates falling, the U.S. is in an excellent position to bring the COVID-19 pandemic under control at long last. Is the end in sight? Perhaps, but it will take continued vigilance. Indeed, the emergence of additional variants is a significant current concern. Therefore, genomic surveillance remains of the utmost importance, so we can identify and track any emerging threats and respond accordingly.