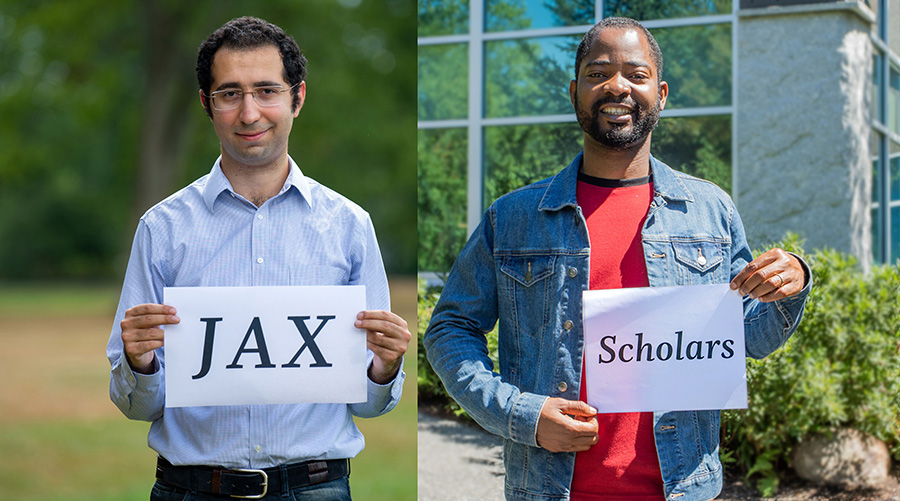 The postdoctorate associate researchers were selected based on their cutting-edge research and exemplifying a well-rounded 21st century member of the scientific community.

The Jackson Laboratory (JAX) is proud to announce the 2020 recipients of the JAX Scholar Award: Raman Akinyanju Lawal and Ali Foroughi pour. These two researchers have received this top honor due to their cutting-edge work that may have serious long-term implications, and because they represent what JAX stands for: researchers who will go out into the world and change what it means to be a scientist.

The JAX Scholar program (started in 2014) is designed to attract and motivate top talent. Meredith Theeman, program director for pre- and postdoc education says that the competitive nature of the program has a net positive effect because it challenges everyone to work harder. She says that ultimately, the goal is to develop researchers that contribute to improving human health.

Science is a team sport

Theeman says that this year’s award decision was exciting because there were many highly qualified applicants doing incredible work. Foroughi pour and Lawal won out because “they show rigor and curiosity and a willingness to take on new approaches,” Theeman says. “They represent the future of genetics and genomics as a whole: We need more researchers who can work interdisciplinary.”

Foroughi pour and Lawal go beyond being incredible scientific minds and show that they are eager to engage with and better their scientific community. Theeman says Foroughi pour and Lawal have shown their willingness to cross boundaries within their own training to approach challenges in novel ways and are good models of what a modern, community-focused scientist could be.

According to Theeman, “JAX is building scientists that can go out in the world and be seen as accessible. JAX people are those who can be engaged with and help others,”.

Each of the 2020 JAX Scholar recipients have a heart and mind to help others and improve global health, though they approach it in different ways. For Lawal, it all started with chickens.

Raman Akinyanju Lawal, helping the future by unlocking the past

Lawal is from Nigeria, and growing up, he was fascinated with the variety of life that was all around him. He explained to me that as a boy, he observed many different animals, all with different skin texture and color, and plant life with many different variations. Lawal reflected, “I was always curious to learn about these observable amazing differences and what give rise to them because such knowledge is helpful to our understanding of genetic diversity.”

In his words, “genetic diversity is central to organismal survival especially as our environment continue to change.”

Focusing on this question of genetic diversity for his Ph.D., Lawal studied the humble chicken, the world’s most populous domesticated livestock species. In particular, he wondered how the chicken developed variations that allowed it to adapt to diverse habitats and the most extreme environmental conditions.

Through this line of inquiry, Lawal’s P.hD. research tracked down and revealed that the chicken was domesticated 8,000 years ago in Asia from its primary ancestor, the Red junglefowl Gallus gallus. The genome of chicken was subsequently enhanced through gene flow from other three wild ancestral species: Grey junglefowl, Ceylon junglefowl and Green junglefowl. He then uncovered critically important genes that allow the chicken to adapt and survive in hot and cold climates across wide areas of the world.

Lawal then asked the big question that would lead to his work at JAX: if he could identify how, historically, chickens could overcome adversity, adapt, and survive, could he also discover such similar genetic mechanisms in humans?  By figuring out how humans have adapted to survive in the past, could we find the right medical solution to modern health problems?

One example is of early humankind. Ancient hunter/gatherers’ bodies evolved to be able to store fats for longer periods of time to help them survive during food scarcity. In our modern society where food is abundant, those same genes may make it harder for people to maintain a healthy weight.

This idea of genetic replacement is still in early stages of research, but it can help us (such as introducing genes that can promote survivability in people) or hurt us (as the example with the body fat).

Lawal conducts research in the laboratory of JAX Assistant Professor Beth Dumont, Ph.D. She says she has little doubt that Lawal will discover scientific advances of “critical scientific importance from both ecological and biomedical standpoints.”

Ali Foroughi pour, researching and training the present to better the future

Ali Foroughi pour, the co-winner of the Scholar award, is also conducting research that will have critical long term importance. Just as crucial as his research, he believes, is leadership and training within a lab.

“There is a limited impact that one person can have,” Foroughi pour says. “More important than one person doing all they can, is training the next generation of researchers.”

We need scientists to do the things we cannot imagine

These researchers include not just other postdocs, predocs, and undergrads, but high school students as well; Foroughi pour feels strongly that everyone interested in science and research should be guided and encouraged to pursue their curiosity and passion.

“We need scientists to do the things we cannot imagine,” he said, “High schoolers especially can absorb anything you throw at them and are extremely creative. These kids should be able to explore and have their own career.”

Foroughi pour didn’t win the JAX scholar for this inclusive mindset alone. He is also pursuing research that will have serious ramifications in the world of cancer research and beyond.

Specifically, he is trying to figure out how neural networks and deep learning can assist in medical treatment suggestions. Put basically, how can we use similar technology that drives streaming media suggestions to instead predict the effectiveness of cancer treatments for patients?

To approach this question, Foroughi pour will collect data of how certain cancer treatments affect tumors grafted onto mouse models. He then used this data to “train” the neural network to observe which treatments worked in which cases. The computer will “learn” about how certain treatments affected certain types of cancerous tumors. One day this “trained” neural network may be able to offer suggestions to clinicians about possible courses of treatment for human patients.

There are a lot of hurdles to be cleared to make this program a reality. As deep learning is a new field, the technology behind it is still “a black box.” The specific mechanisms of what make machine learning possible are still vague, and new research is emerging all the time. Despite this, Foroughi pour is excited about the long road ahead.

“The goal here is to unpack the mystery and be one step closer to personalized treatment,” he says. Forougi pour’s PI, Jeffery Chuang, Ph.D., shares his enthusiasm, saying, “As data grows in biology research, the challenge of interpretation is ever more critical. It’s people like Ali who will lead the translation of these data into outcomes for patients."