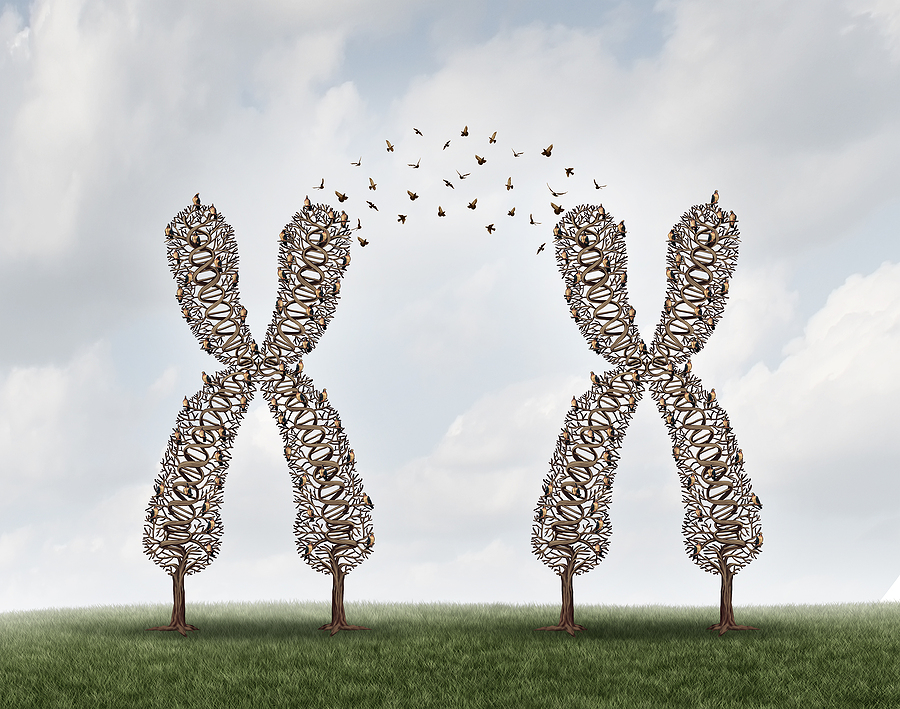 Meiotic recombination is one of the fundamental processes of mammalian reproduction, but recent research has revealed multiple molecular workarounds when a key component—PRDM9—is missing. A paper in Scientific Advances now reveals that the workarounds themselves have mouse strain- and sex differences, indicating that recombination and fertility is more complex than previously known.

Recombination is a crucial process in mammalian reproduction. It occurs during meiosis, the specialized cell division that yields eggs and sperm containing one copy of each chromosome (23 total in humans) instead of the two copies found in other mature cells. Before the paired chromosomes separate, they cross over and exchange homologous (similar) sequences, thereby generating additional genetic diversity. Recombination also helps to ensure the accuracy of chromosome transmission to the next generation.

Understandably, the recombination process is highly controlled. Mutations that prevent it lead to sterility, and recombination between non-homologous sequences can lead to diseases, including cancer. As part of the regulatory system, scientists have known for decades that there are recombination “hotspots,” locations in the genome where recombination most frequently occurs, but what determines those hotspots remained elusive for many years. About ten years ago, researchers including Ken Paigen, Ph.D. and Petko Petkov, Ph.D.Investigating genetics/mechanisms of recombination and role of PRDM9.Petko Petkov, Ph.D. , of The Jackson Laboratory (JAX) revealed that the hotspot locations in mice and humans are determined by a protein that binds to DNA known as PRDM9. Subsequent research showed that PRDM9 mutations result in meiotic arrest and sterility in mice, and point mutations in human males were associated with infertility, suggesting that functional PRDM9 is required for successful reproduction.

The picture has become cloudier in recent years, however. Fertility or semifertility has been found in mice lacking PRDM9, and the entire canine lineage can recombine successfully without a functional Prdm9 gene. Research into loss-of-function genetic mutations in humans also identified a human female with healthy children who lacked functional PRDM9. But how could that happen? A paper in Science Advances, “Sexual dimorphism in the meiotic requirement for PRDM9: A mammalian evolutionary safeguard,” provides an answer: biological workarounds, which differ between the sexes, that allow fertility in the absence of PRDM9.

The research identifies a Prdm9-independent recombination initiation pathway in oogenesis (egg development in females) in mice. A team of JAX scientists led by Affiliated Scientist, Single Cell Biology Tanmoy Bhattacharyya, Ph.D. and Affiliated Scientist Natalie Powers, Ph.D., found that in mice with very low or no PRDM9in some genetic backgrounds are fertile and , a protein called CHK2 can act as a modifier promoting redundancy of PRDM9 in mice. CHK2 is a meiotic DNA damage repair protein, and it serves as a checkpoint in meiosis, eliminating immature eggs (oocytes) with too much DNA damage. Preventing CHK2-dependent checkpoint activity can restore fertility in females lacking PRDM9 activity.

What's next with PRDM9 genetic research?

The mechanism is still unclear. The authors speculate that eliminating the checkpoint surveillance allows some oocytes to survive long enough to allow for PRDM9-independent crossovers to occur, completing meiosis in sufficient numbers to produce offspring. The situation is somewhat more complex, however, as different mouse strains demonstrated notably different fertility levels, with CAST Prdm9-null females far more productive than C57BL/6 null females. Also, a study in a different strain, PWD, showed partial restoration of meiosis in Prdm9-null males but not females. It is apparent, therefore, that there are other strain- and sex-specific modifiers of PRDM9-independent recombination and meiotic success.

Further work will be needed to determine the mechanisms underlying the differences in the pathways involved. Nonetheless, the implications raised by the phenomenon are profound, and the study provides new insights into the checks and balances that come into play in one of the fundamental evolutionary processes in mammals: genetic recombination.

The paper is dedicated to memory of Professor Ken Paigen.