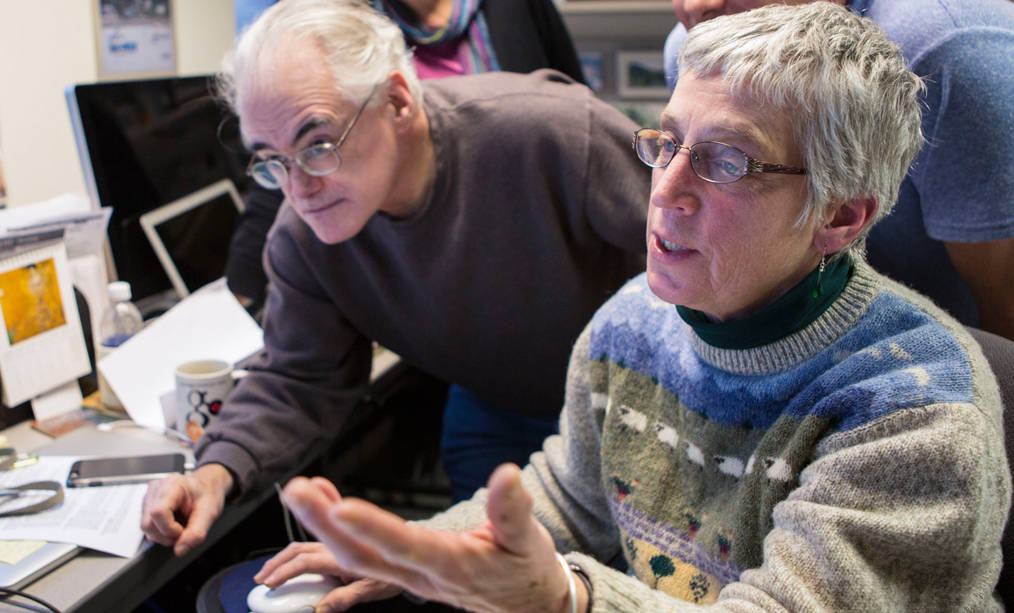 You know that person who always knows all the rules of grammar, syntax and usage, ensuring maximum clarity of communication? Judith Blake, Ph.D.Researches functional and comparative genome informatics, developing systems to integrate and analyze genetic, genomic and phenotypic data.Judith Blake is that person, but for genes.

Blake, a professor at The Jackson Laboratory (JAX), is one of the leaders and founding principal investigators of the Gene Ontology (GO) Consortium, an international group of scientists that have established “controlled, structured vocabularies” to provide the consistent and strictly defined language needed to describe the functioning of genes across all species using a common standard.

This effort makes it possible for the worldwide scientific community of molecular and computational biologists to communicate unambiguously about specific genes, thus enabling comparative studies. At JAX, this is especially vital for studies comparing mouse and human genes.

My big picture has always been the evolution of life into different forms, and how we work with that knowledge.

“It was computers and database systems that necessitated very specific definitions around how genes and proteins work,” Blake says. “In conversation people can usually understand each other even if context changes or the words aren’t quite precise, but computers don’t have that sensitivity—they can’t handle the fuzziness.”

The International Society of Computational Biology (ISCB) is honoring Blake with its 2020 Outstanding Contributions award, and naming her among its 2020 Fellows.

ISBC is recognizing Blake for her work establishing “fundamental building blocks in a wide variety of bioinformatics and computational applications. She develops systems to integrate genetic, genomic and phenotypic information, and has had significant influence on semantic systems use in biology and on bio-curation as a field.”

After earning her Ph.D. in biology at Harvard University, Blake brought her molecular evolution focus to bear working among the pioneers of the Human Genome Project at The Institute for Genomic Research (TIGR) in Rockville, Md. “We were trying to figure out how to assemble all these little DNA sequences into a complete genome,” she recalls. “Before that, it was a big unknown even as to how many genes there might be.”

Blake joined JAX in 1996 as a research scientist in the Mouse Genome Informatics group. Two years later, while attending the ISMB’s annual meeting in Montreal, she met with colleagues working on the genomes of mouse, fruit fly and yeast, from Cambridge University, Lawrence Berkeley National Laboratory and Stanford University. The group launched the concept of Gene Ontology, envisioning open-access, structured, controlled vocabularies that detailed precise definitions organized into a computationally tractable network of information.

“There were biomedical ontologies in the medical schools for handling some data,” Blake says, “but we wanted ontologies to support comparing molecular data on how genes worked for all these new genomes with all the data freely available. Initially, we just needed terms to be used consistently among all the species whose molecular systems were being described in genomic terms and we used that term—'gene ontology’ to capture what we envisioned.” After the meeting the group applied for and received a federal research grant, with Blake as its one of the original multi-principal investigators and with the grant managed through JAX.

Today the GO Consortium’s website provides free access to 44,579 gene ontology terms, 7.4 million annotations, 1.3 million gene products and 4,591 species, and is the world’s largest source of information on the functions of genes. The GO success and standards have led to the emergence of multiple biomedical ontologies and to the advancement of metadata standards in support of data analysis in the greater world of genomic and genetic investigations.

Blake was promoted to the JAX faculty in 2002. Now a full JAX professor, she also holds faculty posts at the Tufts University School of Biomedical Sciences and the Connecticut-based Institute for Systems Genomics, and is a visiting professor at the University of Colorado School of Medicine.

Blake will receive the Outstanding Contributions Award during the ISBC annual meeting in Montreal, Quebec, Canada, July 12-16. There IBSC will also honor 12 scientists as 2020 Fellows, including Blake, recognized for “her many contributions to bioinformatics over her distinguished career, most notably the Gene Ontology and the Mouse Genome Databases. These two resources are fundamental pieces of scientific infrastructure serving as foundational tools on which so much of genome-scale science is built.”

“JAX gave me the freedom to run these big projects and to explore new things,” Blake says. “My big picture has always been the evolution of life into different forms, and how we work with that knowledge.”