CRISPR methods have made genome engineering accurate and efficient. But each gene codes for multiple versions of the same protein called isoforms, created by alternative splicing of the messenger RNA. Splicing dysfunction underlies many conditions and diseases, so targeting the process has significant therapeutic implications. A team led by Albert Cheng developed a new method, CASFx, that leverages CRISPR technology to alter messenger RNA splicing and precisely control protein isoform production. 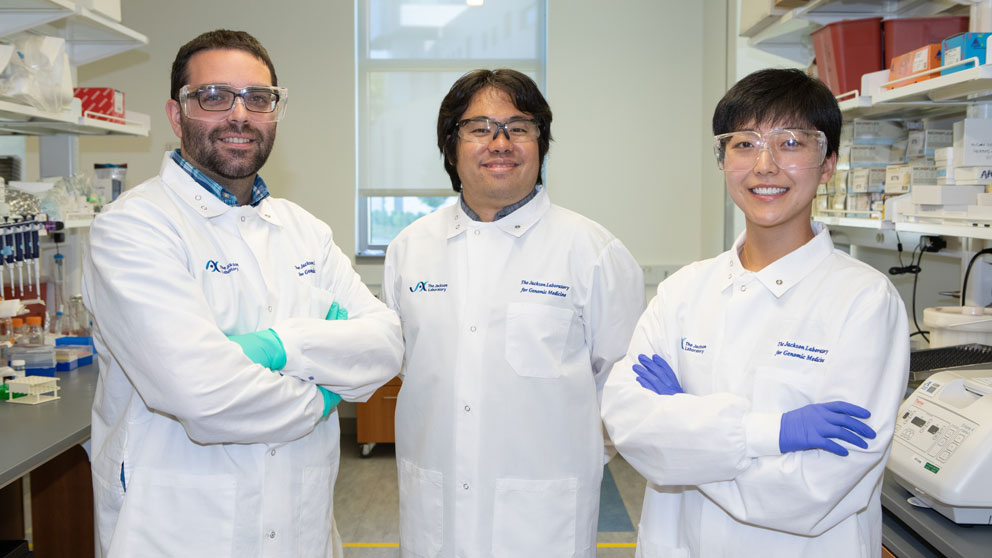 For decades, the cornerstone of genetics taught in high school biology classes was called the central dogma. Biological information is stored in DNA, a small percentage of which codes for genes. The gene sequences are transcribed to RNA, which serve as messengers to take the information to ribosomes, where they are translated to proteins that carry out the functions within a cell. It’s an elegant system, and the central dogma covers the basics relatively well.

Except there is more to the story. Much more.

One additional element is known as RNA splicing. When a DNA coding region is transcribed to messenger RNA (mRNA), the mRNA is longer than the mature version that is ultimately translated to a protein. It contains sections known as exons and introns—introns are spliced out of the mRNA, while exons remain. The splicing process serves as a part of the genetic regulatory system, and alternative splicing of mRNAs is common. Therefore, one gene usually produces many different sub-types of the same protein, known as isoforms. And, not surprisingly, mRNA splicing dysfunction is now associated with many diseases and disorders.

As a result, researchers have been working on how to alter the mRNA splicing process. In “CRISPR Artificial Splicing Factors,” a paper published in Nature Communications, reports on CRISPR Artificial Splicing Factors (CASFx), a system his lab developed that is able to target specific exons for inclusion or exclusion within an mRNA. The team also created inducible CASFx (iCASFx), which allows researchers to control alternative splicing with the addition of a small molecule/drug.

Previous methods have provided ways to manipulate the levels of a particular isoform through targeted degradation or overexpression, but they have the potential to alter the expression of the target gene. Also, a method for perturbing splicing events—splice-switching antisense oligonucleotides—has advanced to clinical trials, but it’s expensive and requires a lot of development work to identify effective target sequences. Instead, CASFx is based on the widely used DNA engineering method, CRISPR/Cas, modified to target RNA.

The team, spearheaded by UConn Health graduate student Menghan Du, and JAX researcher Nathaniel Jillette, fused RNA-targeting Cas proteins with splicing regulatory domains, providing an efficient, accurate way to target RNA splicing regions. The method can be used to either include or exclude specific exons by specifying particular RNA sequence elements. Targeting sequences downstream from the exon will lead to its inclusion, while sequences targeted within the exon will result in its exclusion in the mature mRNA. CASFx also doesn’t introduce permanent changes within the genome, meaning that it can be applied temporarily and that its effects are most likely reversible. Finally, it’s possible to incorporate a domain that’s inducible by a small molecule such as rapamycin, providing an additional layer of splicing control.

To test the method, Du worked with cells derived from a spinal muscular atrophy (SMA) patient. SMA is caused by a deleted or mutated SMN1 gene, but there’s a largely similar gene, SMN2, that could largely rescue function if one exon—exon 7—was included instead of spliced out of the mature mRNA. Using CASFx, the team activated exon 7 inclusion and demonstrated a more than two-fold increase in the exon 7-including SMN2 isoform. The results indicate that in addition to broadening the CRISPR research toolkit, CASFx provides a potential therapeutic strategy for diseases and conditions caused by RNA splicing dysfunction.