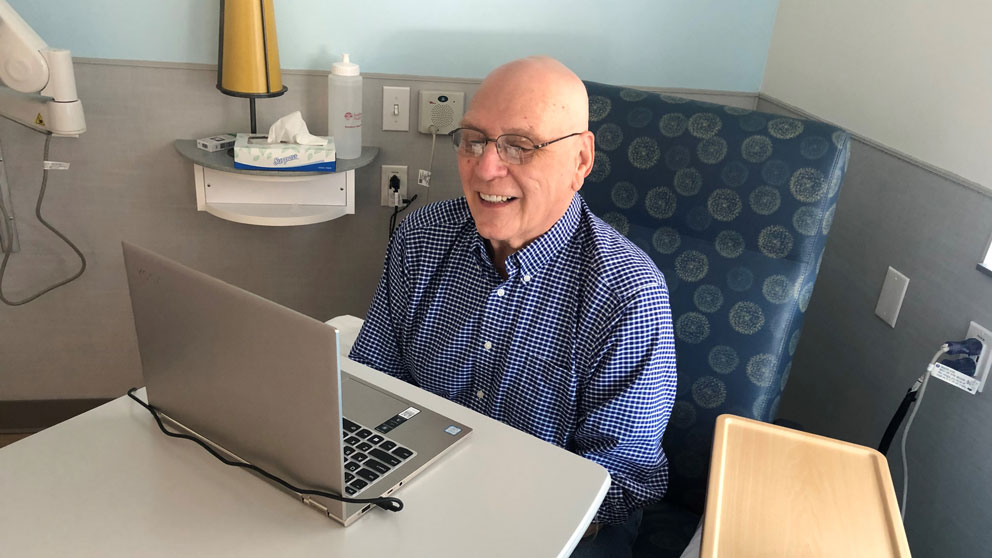 John Pierce is a cancer patient who is participating in the Maine Cancer Genomics Initiative. Pierce was able to take part in the MCGI tumor board meeting online in March. Photo by Alexandra Giardino.

From cancer genomic testing to clinical trials, John Pierce is exploring the latest advances to address his medical issues.

What advice would John Pierce give to someone who has just received a cancer diagnosis? “First, be your own best advocate. When I was a 20-year-old combat helicopter pilot in Vietnam, I learned that when someone or something is trying to kill you every day, you recognize that nothing focuses your mind like your own mortality.”

Second, he says, “get genomic profiling.”

Nearly 50 years after his combat experience, Pierce is now retired from a successful and varied high-tech career. And following a series of unusual health crises that trained him to seek out the best medical advice and treatment, he has been diagnosed with cholangiocarcinoma—a very rare cancer of the bile ducts, the slender tubes that carry the digestive fluid bile through the liver. Pierce is now bringing his lifelong facility for quickly acquiring technical expertise to his treatment regime, to be his own “best advocate.”

While Pierce may not be your average cancer patient, there is in fact no such thing as an average cancer patient. Every patient, and every cancer, is genomically unique. Pierce says that when he learned he had cancer, “my first inclination was to obtain genomic testing. Cancer isn’t liver cancer or lung cancer—it’s defined by whatever the cancer’s genomic profile is. And that’s why I started down this path and requested testing.”

At Pierce’s urging, his clinician ordered Guardant 360 and FoundationOne CDx genomic profile tests. Pierce was also participating in Dana-Farber’s cancer genomic testing initiative, and had heard about genomic testing made available to patients with advanced cancers in Maine through The Jackson Laboratory’s (JAX) Maine Cancer Genomic Initiative (MCGI). “I thought by participating in the JAX program, I could contribute to their research.”

Pierce changed oncologists to Roger Inhorn, M.D., Ph.D., of MaineHealth, a member of the MCGI’s steering committee. JAX founded MCGI in 2016 with a grant from the Harold Alfond Foundation, and has already enrolled every oncology practice in Maine, and most of its oncologists. Participating oncologists submit patient tumor samples to be sequenced and profiled for genes known to be associated with various cancers, and with response or resistance to FDA-approved targeted therapies or new drugs in development.

“For almost all of my patients who have an advanced malignancy and have enough tissue available,” Inhorn says, “I offer participation in the MCGI, and for most malignancies there is a standard-of-care treatment that will be available to them. But unfortunately a lot of these patients will have progression or recurrence in spite of standard-of-care options. When standard of care therapies fail, we're very commonly left in a situation where we're looking for second- or third- line therapies where there aren't good, clear options. Genomic profile testing helps clarify potential options by looking for targetable mutations for which there might be either a clinical trial option or a commercially available drug that can be used to treat their malignancy.”

Inhorn notes that like many patients participating in the MCGI, Pierce “understands that there is also an altruistic piece to this. They understand that MCGI and the clinical community are trying to learn and create a larger database of treatment options and to engage and educate oncologists about how to best use these platforms. I think the day is coming where everyone who has an advanced malignancy will be offered genomic profiling, it's going to become a standard of care.”

After the tests: analysis

Tumor profiles from MCGI testing, and their best treatment options, are reviewed at Genomic Tumor Board (GTB) sessions, virtual conferences that link clinicians with experts in cancer genomics and clinical trials. Inhorn mentioned to Pierce that there was a tumor board meeting coming up, and Pierce said, “I'd like to participate. I'd like to be in the room when they're discussing my case.”

Jens Rueter, M.D., the medical director of MCGI, says that Pierce’s participation in the tumor board “worked out really well. Beforehand I was a little bit nervous about it, because I didn't really know what to expect. He’s an unusual individual because he embraces new technologies, and that's coupled with really wanting to impact his treatment plan dramatically.”

These days, online meetings are ubiquitous, but for nearly three years MCGI has been conducting the GTBs as virtual videoconferences, connecting oncologists and experts at other institutions online. This format also enabled Pierce to participate safely in the discussion of his   case, and Inhorn felt it would be a useful addition to his treatment.

Rueter says GTBs are an important component of the MCGI, as they often provide the most significant input to clinicians with respect to applying the genomic information in their patients’ care plan. Typically, four cases are discussed during each one-hour meeting. A brief case presentation by the treating oncologist is followed by a presentation of the genomic case information. Then, external advisors specializing in precision oncology give their interpretation of the case and provide significant guidance to the oncologist and the medical team. In this case Pierce himself was also able to query the experts.

“The meetings in Dr. Inhorn’s practice have been particularly interactive and well-attended,” Rueter notes. “The oncologists are very thankful that the MCGI provides them with this input, which has impacted patients’ treatment decisions in an increasing number of cases over the last three years.”

According to Rueter, most cancer patients fall into one of two categories. “The first are comfortable doing what their doctor says—maybe asking questions or even questioning some decisions, but basically trusting the doctor. And the second tend to shop around for doctors until they find the one who tells them what they want to hear.” Pierce is in a rare third category, Rueter says. “He just wants to know everything that could possibly be done to address his cancer.”

Rueter adds, “we are planning to continuously improve our model based on the feedback we receive from clinicians. I really think we should offer participation in GTBs to more patients—this will be particularly successful if we encourage patients to actively participate in the discussion.” 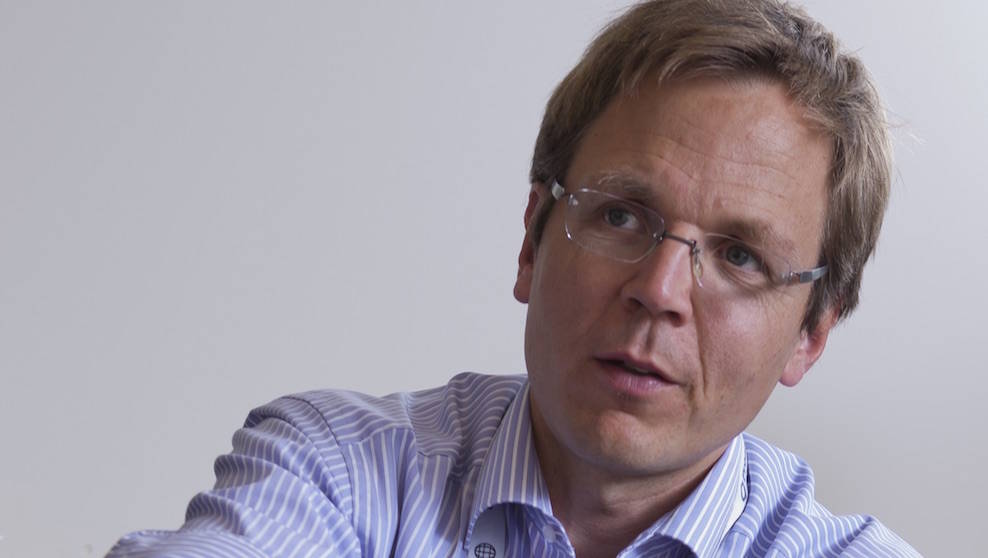 A lifetime of high-tech challenges

Environments don’t get much more technical than Pierce’s first workplace after high school, a Huey helicopter cockpit in a war zone. Besides maneuvering a five-ton aircraft and monitoring dozens of instruments, you’re constantly on the lookout for enemy fire.

Pierce returned from Viet Nam and served as a U.S. Army flight instructor and then progressed to a command in the flight standards department.

"After taking college courses while still in the Army I finally decided to get out of the Army and go to college full time and complete my degree on campus at Embry Riddle Aeronautical University," he says. He then returned to his native Maine and went into the building business, later going off on his own to build houses, and then shifted to custom farming for the next decade.

In the 1980s, Pierce explains, there was a dairy buyout and many dairy farms sold off their herds. “There were a lot of farms with unutilized hayfields, so custom operators like me, with high-tech hay equipment, utilized all of those fields. Over several years I made many thousands of bales of hay.”

Then, Pierce says, he got interested in computers and became a consultant. At first he was working with organizations like York County Community College in Wells, Maine, developing a computer curriculum. He also taught newly hired technical staff how to use the internet when the only access was by command-line interface; midway through the course the graphical browser Netscape transformed the class and the world of computing.

After schooling himself in proposal writing, Pierce joined with the Maine Science and Technology Foundation and landed a contract to train teachers and librarians as Maine’s schools and libraries were connected to the internet. He also worked with Maine manufacturers, libraries and other institutions—including JAX—on issues related to Y2K, after which he returned to private consulting.

His last consulting project was through the U.S. Department of Commerce and for the International Fund for Ireland. He worked with 30 companies in both Northern Ireland and the Republic of Ireland to help them set up their own websites and e-businesses.

“When I was in Ireland I was always very thirsty, drinking several two-liter bottles of Coke every day,” Pierce recounts. In 2002 he returned to Maine, retiring to a little farm in Kennebunk with his wife and two children. Pierce’s doctor checked his blood sugar: While normal blood sugar levels are 70-99 mg/dL, “mine was 400 or 500. That's when they discovered diabetes, and we started on this medical journey that's ongoing today.”

Clinical trials are for the next generation of patients. We're trying to learn from a trial how to better treat the cancer.

Pierce got his diabetes under control only to face an intractable asthma. After a long search for answers, he ultimately found a research clinician in Boston who diagnosed Churg-Straus syndrome, a disorder (now called EGPA, for eosinophilic granulomatosis with polyangiitis) in which blood vessels become inflamed and may restrict blood flow to tissues and organs. At the time the only available treatments were steroids and chemotherapeutic immunosuppressants, and Pierce elected to take the most aggressive type of the latter, cyclophosphamide.

A year later, traveling in Texas with his wife in a fifth-wheel RV, Pierce had a health crisis stemming from a side effect from the cyclophosphamide that landed him in Houston Methodist hospital. This resulted in a rampant infection from internal abscesses, which required surgery and several weeks’ recovery.

At that point, Pierce says, “we went back to the drawing board on the asthma thing, and they tried Imuran, another immunosuppressant chemotherapeutic drug, typically used for transplant immunosuppression. But that suppressed my immune system sufficiently to give me melanoma.”

Clinical trials and the future of cancer treatments

Despite successful treatment of the melanoma, Pierce still had the EGPA to deal with. The research clinician who had first diagnosed him was the principal investigator of a phase one clinical trial for Mepolizumab, a monoclonal antibody that suppresses IL5, the protein that triggers the eosinophil overproduction in EGPA. “I was one of the eight human guinea pigs in Boston to have tried it, and it worked,” Pierce says. After the phase one trial, Mepolizumab was not available to patients and he had to stay on steroids for several years, but he was accepted into the drug’s phase three trial. “It was life-changing,” Pierce says. “I’ve now been on Mepolizumab for four years, and was living a pretty normal life until this new cancer showed up.”

Rueter sees MCGI’s genomic testing for tumors as a stepping stone to developing safer, more targeted clinical trials for cancer. “The more patients that contribute data, the more information there is about different kinds of cancers, and the more effectively clinical trials can be designed.”

Meanwhile, Pierce is continuing to actively advocate for his health. “I think cancer and oncology clinicians today don't talk about cures, they talk about control. And as far as I'm concerned, control isn't really good enough for what I'm looking for. I am looking for a cure.”

JAX In Vivo Pharmacology Services has experience with a range of common tumor cell lines and the capability to use customer provided cancer cell lines for in vivo therapeutic...