Three years ago, Priscilla Chan and Mark Zuckerberg established the Chan Zuckerberg Initiative (CZI), an organization with the mission to find new ways to leverage technology, community-driven solutions, and collaboration to accelerate progress in science and education. CZI also has extensive programs to address associated social justice and policy issues.

The science program launched with the audacious goal of supporting the science and technology that will make it possible to cure, prevent or manage all diseases by the end of this century. One of CZI’s initial areas of focus has been on neurodegenerative diseases, such as Alzheimer’s disease, an area that has seen little clinical progress and many failed clinical trials. In October 2019, Science Program Officer Katja Brose, Ph.D., visited The Jackson Laboratory for Genomic Medicine to speak about CZI and moderate an Alzheimer’s disease research panel discussion at the JAX Healthcare Forum, an annual gathering of leaders in a wide variety of healthcare fields. JAX was able to catch up with Dr. Brose after her sessions. 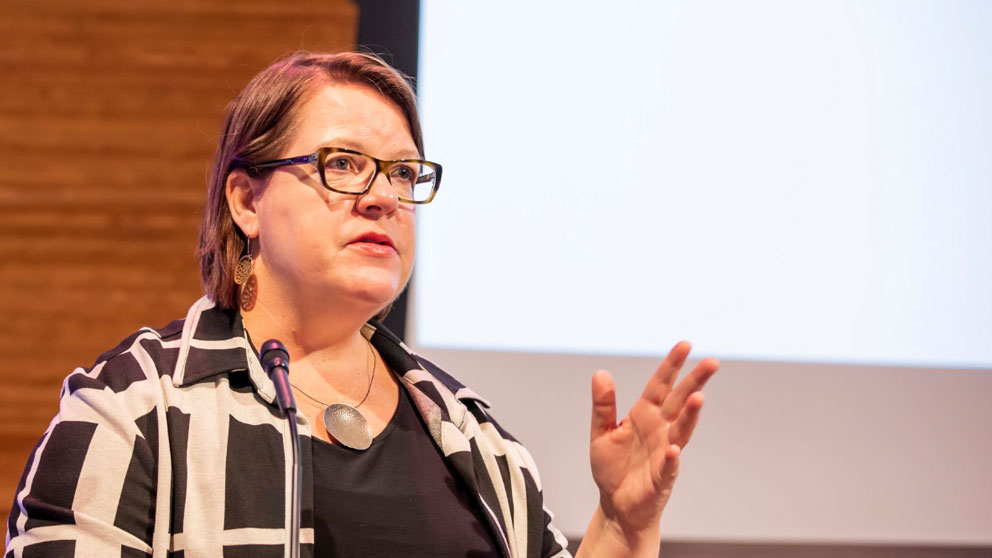 Katja Brose of the Chan Zuckerberg Iniitiative presents during the Healthcare Forum at The Jackson Laboratory for Genomic Medicine. JAX photo by Thomas Fouchereaux.

JAX: I want to get your impressions of the Healthcare Forum. This has been the sixth year, and when it started the genomic medicine proof of concept had barely begun. These days, discussions about "personalized medicine" are much more common in the clinic. What did you think of the meeting?

KB: I like the idea of a meeting, like this one, that aims to bring together diverse stakeholders, and this meeting has been even more diverse than you would normally see. I think the ability of many of the speakers to distill the big issues and take some controversial positions was fantastic, and it’s great that people feel open to do that. With six years into this meeting series, it’s interesting to see how the field has evolved and where progress has been made.

JAX: A topic mentioned a lot at the Forum is data sharing, and open data is a key part of CZI’s funding philosophy. What is CZI doing to facilitate collaboration and provide open access to experimental data? What are the primary challenges you see for open data sharing?

KB: All of the investigator-initiated grants that we fund have collaboration and open science as a centerpiece. We look for collaborative potential when people apply, and we try to bring the groups that we fund together to collaborate. When we fund a new program, we always start with a kickoff meeting and will bring investigators and their teams together regularly for meetings. These meetings are always a highlight and a big boost to those communities. But part of our job on the program side is to continue building the communities outside of the annual meetings and, importantly, to make sure that the community grows and remains open. We want the impact for the work that we do to go beyond the immediate investigators and labs that we fund. Open science is one way that we can extend the impact beyond the circle of our grantees.

One challenge for the vision of open science is that there is sometimes something of a disconnect between the open science aspirations of the funders and the world of academic science, the day-to-day practical issues that researchers face. While the trend in academia has been aspirationally aligned with more collaboration, interdisciplinary science and more open science, the legacy policies and practices don’t often support these aspirations. That being said, I actually think collectively, biomedicine is moving in a good direction. There aren’t many people out there anymore who would say open science is a bad thing. But the traditional structures can act against it.

JAX: So as a new but significant funder, what can you do?

KB: We can model open science in the communities of grantees we fund and support. We can enable and promote practices and platforms that make it easier for scientists to collaborate, share, and do their best work. We can also advocate for a broad and inclusive vision for open science, both at the grass-roots level and with academic leadership---senior academics, administrators, other funders ---  and find like-minded partners who will also push this vision. At the same time, while we advocate and hopefully enable a new way of doing science,  I also think we have to be humble and empathetic about the challenges that researchers on the ground face, especially early career researchers and scientists working in less well-resourced or privileged environments. We should not let these challenges keep us from advancing towards the goals of open science, but at the same time, it wouldn't be fair to hold researchers to certain policies that in the end are detrimental to their ability to do their science or advance their careers.

JAX: CZI has chosen to tackle neurodegeneration, one of the most challenging disease areas around. The failure rate for clinical trials, such as amyloid blockers for Alzheimer’s disease, has been almost 100 percent. But in 2019, we have many new capabilities. What's exciting you the most about the potential for progress in the field?

KB: Neurodegeneration is an incredibly challenging field, both because of the scale of the clinical problem — the tremendous public health challenge and the immense human toll — and also the challenging biology involved. On the other hand, we’re also at a time where there’s a lot of excitement and promise in this field. I think because of the clinical trial failures we’ve seen, there is more innovation. Today more than ever, there is more of a willingness to open up and look at other potential mechanisms, targets, pathways, and other stakeholders in the field. And I think it's a little bit of a perfect storm in the field, in that just as the clinical trials failures were stacking up, there has been new work coming through the pipelines that was starting to point in different directions. Like the idea that inflammation has a role in neurodegeneration. In some ways, a role for inflammation seems obvious in hindsight. In fields like Parkinson’s disease and ALS, patients have been talking about a role for immune and inflammation for years, but neuro-immunology as a field has been neglected until recently. This may just be how the cycles of science can go, but I do think the failures then drive us to do better.

Also, on the technology side, I think there is a lot of excitement about new approaches to look at these diseases in models that better model human biology. Mouse models for disease can only get you so far, and for Alzheimer’s disease, they've been kind of abysmal. With new technologies, there are better, next generation mouse and animal models coming out of places like JAX. Also, there's much more opportunity for people who are working in model systems to integrate that with knowledge from human tissue and data sources and new methods like single-cell sequencing and human-derived stem cells. I think this approach of bridging between human and model systems work brings a huge amount of potential to both better understand these diseases and translate findings from the lab bench to the clinic.

JAX: CZI is only three years old, so you're still kind of at a startup stage. And it’s off to a good start. What would you see as success for CZI over the next three years?

KB: Oh, that's a hard one. I'll talk about the science part of it. First, I think we got off to a rapid start. I arrived two and a half years ago, and I was reading RFAs [requests for applications] on day two. So we're an organization that doesn’t wait. That nimbleness is important. We're working and experimenting, learning as we go, which sometimes feels incredibly invigorating and other times incredibly uncomfortable, like flying the airplane before it's fully built. But I think we should keep that culture.

Neurodegeneration is one of the first big disease areas we’ve chosen to tackle. Our goals for our work in neurodegeneration are to have an impact on this field, to support new talent, new ideas and make fundamental advances in understanding the biology of neurodegeneration. At the same time, our work in neurodegeneration is also a kind of incubator and experiment in creating research communities that are innovative, collaborative and open science-oriented. We'll learn things from our work here that we hope we can apply to other communities in the future. It might be inflammation (an area where we just launched a new funding initiative), it might be something else. Imaging is another area in the tool space that we're already invested in, and it’s already transformed biology. The ability to see more deeply, to see more things, allows you to do more, and there's huge amounts of data that will come out of that.

Another area that we think about a lot is in the area of science culture. How can we contribute to positive changes in the way science is organized and practiced? Open science is a big part of this vision. Diversity is also really important to us, and we're funding various things around diversity in the STEM workforce.

We have a lot going on and we’re still learning. We want to continue to innovate but also go deep. We're still a relatively small team, which gives us the advantage of being nimble but it also means we need to be strategic about where and how we feel we can have the biggest impact. Thanks to the generosity and leadership of Mark and Priscilla, we are lucky to be an organization that can think big, take risks, and in principle do anything, even if it means we can’t do everything.