Gene silencers and their vital roles in development

The regulation of gene expression is a complex and nuanced process, and it’s absolutely essential during development. Much research has focused on enhancer sequences that increase gene expression, but non-coding “silencer” sequences also play crucial roles. New research shows that silencers modify 3D chromatin organization to suppress the expression of certain genes at certain time points during development. Disruption of the process can lead to developmental disorders and has also been implicated in certain cancers. 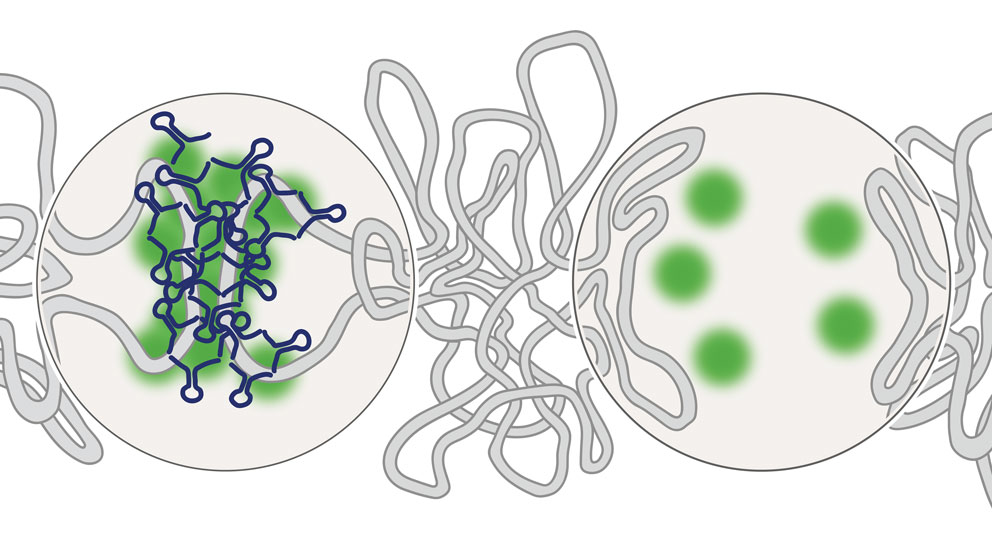 Chromatin being "held "together by the binding influence of proteins and RNA. Illustration by Matt Wimsatt.

While our genomes code for all of life’s functions, reading them as a linear sequence—all 3+ billion base pairs, with 20,000+ genes sprinkled therein— tells a tiny part of the story.

All of our genes do not operate at full capacity at all times. Far from it, actually. It is vital for genes to be strictly regulated so that they are expressed at the right times and the right levels. The sophisticated and nuanced molecular machinery that orchestrates the regulatory function is of particular importance during development. The activation and silencing of all genes’ expression must be delicately balanced spatially and temporarily, much like the yin-and-yang force in nature, in order for a fertilized egg to progress to embryo and ultimately to a functional organism.

PRC2 helps to modify 3D chromatin organization, the highly complex physical structures that contain DNA, into repressive chromatin conformation. While specific genes or other sequences may be far apart on a linear sequence readout, they may be physically proximal within the loops and coils of physical DNA. Using chromatin immunoprecipitation (ChIP)-based interaction analysis (ChIA-PET), a method that determines chromatin interaction, the team showed that PRC2 binds non-coding sequences, known as silencers, that direct transcriptional repression. The silencers link to their target genes through complex connectivity networks. Indeed, developmentally regulated genes bound by PRC2 had very low levels of mRNA, indicating suppression of gene expression.

Although the silencers are non-coding regulatory elements, deleting them leads to developmental defects, including embryonic lethality. Using CRISPR-Cas9 to knock out the silencers, the team showed their absence leads to gene-specific reactivation and altered developmental progression. Interestingly, the researchers also found that the silencers can also transition to function as transcriptional enhancers once the cells have become lineage-specific.

The findings underscore the regulatory versatility of noncoding regions of the genome and provide a better understanding of the importance of silencers in the genomic regulatory framework. Given the functional roles of PRC2 in cancers, uncovering the mechanisms of gene silencing may also provide insight into how the expression of tumor suppressor genes can shut down, which increases susceptibility to tumor progression.