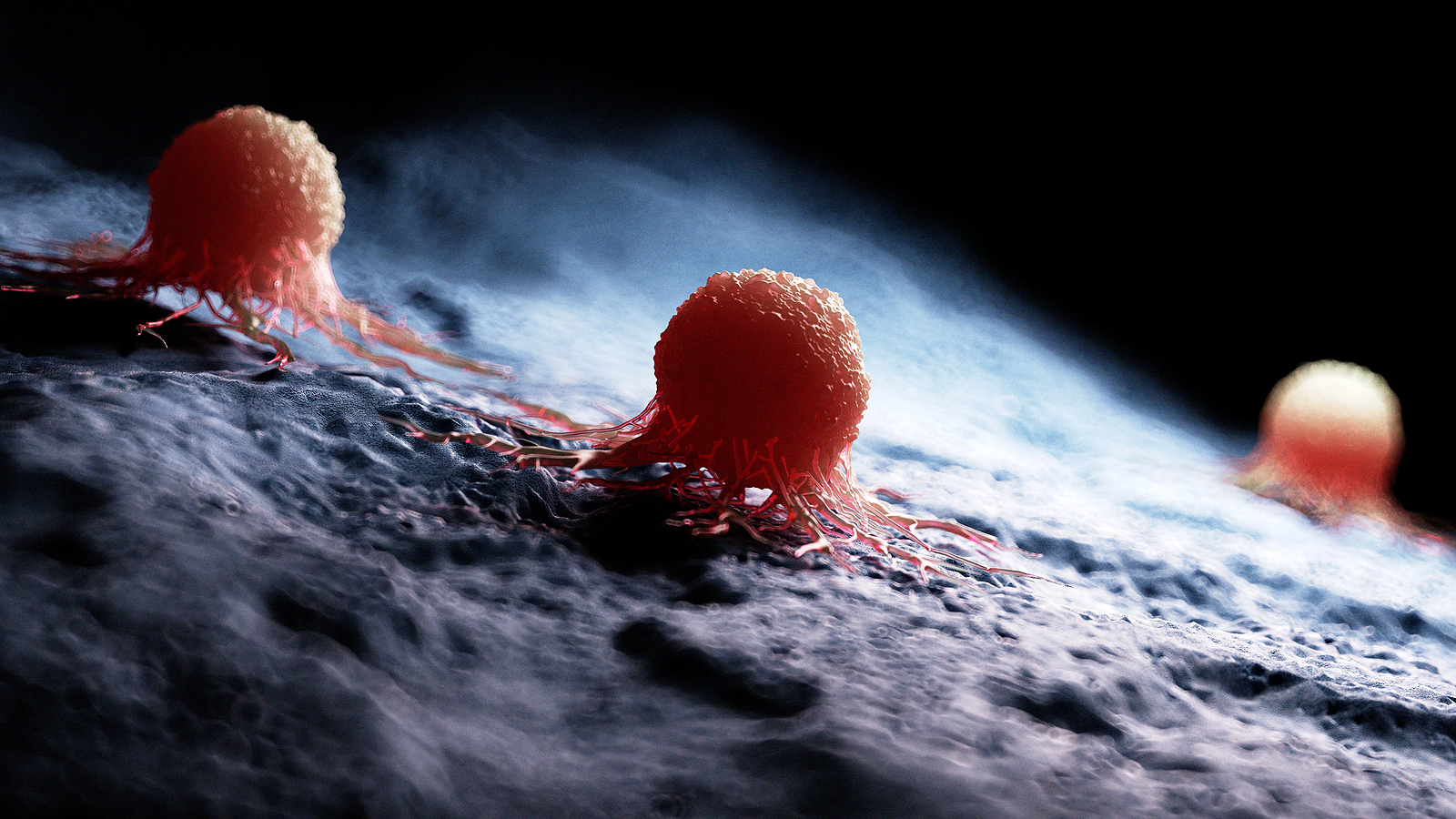 3D rendering of a cancer cell

The role(s) that extra-chromosomal DNA (ecDNA) may play in cancer have been the subject of speculation, but details have been elusive. Now, a paper in Nature Genetics implicates ecDNA in a wide variety of cancers, and associates it with aggressive, difficult-to-treat cases.

When we think of DNA inside our cells, we think of our 46 chromosomes, half from mom and half from dad. Our chromosomes indeed contain almost all of our DNA, which codes for the proteins that carry out the tasks needed for life. Some relatively small segments of DNA have been found outside of the normal chromosomal sequences, however. And these separate pieces, called extra-chromosomal (ec) DNA, may have an outsized role in cancer.

We have found that patients with ecDNA amplification in their tumors have significantly worse five-year survival outcomes than those without.

ecDNA can be found by using fluorescent probes and visualizing it as physically separate from the chromosomes in a cell, and researchers have been aware of its presence in certain cancer cells for years. It is hard to detect using the most common whole genome sequencing methods, however, which involve cutting the DNA into small fragments, sequencing them, then reassembling them using a reference sequence. This makes it very difficult to tell whether a particular sequence was integrated in a chromosome or exists as a separate structure. As a result, characterizing ecDNA and assessing its potential contributions to cancer has been very challenging.

Extra-chromosomal DNA and where to find it

The team used three identifying properties of ecDNA segments—they are circular, highly amplified, and lack centromeres—to detect and characterize large, circular ecDNA structures from cancer patients in a total of 3,212 tumor and 1,810 normal samples. While it was previously thought that ecDNA was present in fewer than 1% of tumors, the approach used by the JAX-led team discovered ecDNA in 14.3% of the tumor samples in the cohort, representing 25 of 29 cancer types analyzed, revealing that ecDNA is in fact a common feature of cancer. Of note, the matched blood and normal tissue samples were nearly free of the type of ecDNA structures found in the tumors.

The circular ecDNA structures amplify the genes contained on them, and the researchers found that oncogenes—genes associated with cancer initiation and progression—were present across the samples. Furthermore, oncogenes on ecDNA were highly expressed. How these large ecDNA structures initially form is still under investigation, but the initial disrupting event can have severe consequences, as more oncogenes in the cells and high expression levels of them appears to be a very dangerous combination.

“We examined patient data, and ecDNA amplification is associated with aggressive cancer features at the biological level,” says Verhaak. “Most importantly, we found that patients with ecDNA amplification in their tumors have significantly worse five-year survival outcomes than those without.”

Where we go from here

Also, while chromosomes are almost always accurately duplicated and evenly distributed when cells divide, ecDNA is inherited in daughter cells at random. Therefore, in quickly dividing cancer cells, the presence or absence of ecDNA can drive genetic differences within a single tumor. These differences, known as intra-tumor heterogeneity, greatly complicate cancer therapy, as treatments often kill most cancer cells but fail to eradicate a slightly different subset of them, leading to therapy resistance and recurrence. The highly frequent presence of ecDNA in the most aggressive tumors may, in part, explain their behavior and provides previously underappreciated opportunities for therapeutic development.

The study provides much-needed detail and insight into the critical roles and mechanisms of ecDNA in cancer.

“We know now that ecDNA is very important in human cancers, and we are trying to use that knowledge for diagnostics and therapeutics,” says Verhaak. “We are on a mission to improve the outcomes of patients with cancer, and our ecDNA discoveries are pivotal for achieving those goals.”