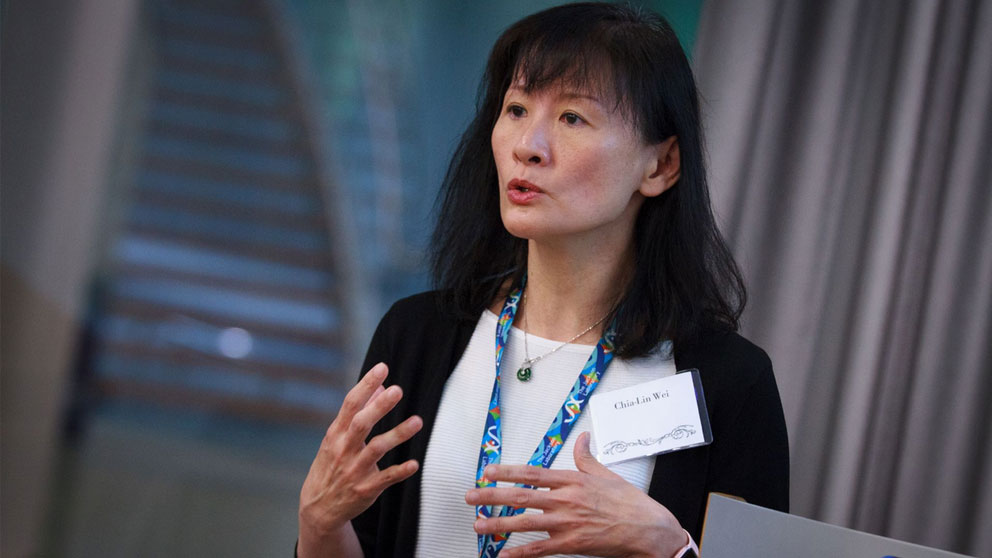 JAX scientist Chia-Lin Wei presents during an event at The Jackson Laboratory for Genomic Medicine in Connecticut. JAX Photo by Jared Skolnick.

The mechanisms regulating gene expression are complicated. Proteins known as transcription factors (TFs) play a key role, binding to specific sequences of DNA to activate or repress transcription of associated genes to messenger RNA. These TF bound sequences, often located in the non-coding regions of the genome, can act as enhancers that regulate transcription promoters (DNA segments proximal to genes that initiate transcription) to increase gene expression. Enhancer sequences can be distant from the gene in question but are brought physically close through three-dimensional DNA looping.

In neural stem cells, a TF known as SOX2 is known to play a critical role in brain development and in maintaining the ability of the stem cells to renew. In humans, SOX2 mutations are associated with nervous system diseases, including epilepsy, learning disorders and eye defects, potentially through the dysregulation of its targeted genes. How the SOX2-dependent three-dimensional chromatin networks regulate gene expression in neural stem cells is under close investigation.

In “Mapping the Global Chromatin Connectivity Network for Sox2 Function in Neural Stem Cell Maintenance,” published in Cell Stem Cell, a team led by JAX Director of Genome Technologies Chia-Lin Wei, Ph.D., presents evidence that the transcription of thousands of genes is affected through long-range interactions with SOX2-bound enhancers. Using a method known as chromatin interaction analysis with paired-end tag sequencing (ChIA-PET), the researchers found connections between large numbers of enhancers and genes, including many important neurodevelopmental genes.

Analyses in mouse neural stem cells without the Sox2 gene showed that many of these genes were downregulated in the absence of SOX2 protein. As a result, the cells lost the ability to self-renew, a critical characteristic of stem cells. Interestingly, Wei was able to identify downstream targets of SOX2. One such gene, Suppressor of Cytokine Signaling 3 (Socs3), was able to rescue self-renewal when overexpressed in SOX2-deficient cells, indicating its importance in the self-renewal mechanism.

Understanding the mechanisms underlying long-range promoter-enhancer connections is important for research into neurodevelopmental disorders and brain diseases, as thousands of variants in non-coding sequences such as enhancers may be linked with them. “Our data suggest that some of the genes showing connections might play a role in human and mouse Sox2-dependent pathology,” says Wei. “Additionally, it might be interesting to search for mutations of the connected enhancers in human diseases such as intellectual disability and microcephaly.”