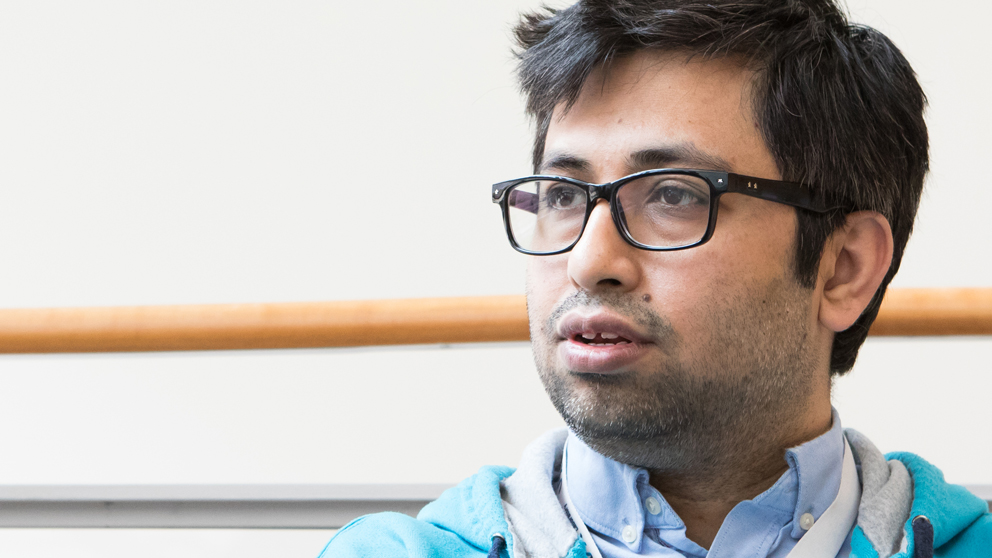 Tanmoy Bhattacharyya is a research scientist in the Handel Lab at The Jackson Laboratory. JAX photo by Tiffany Laufer.

Proteins work together to enable DNA double-strand breaks during meiosis

The process of meiosis, which assigns each germ cell — egg or sperm — just one set of chromosomes, involves an intricate series of events to break the DNA at predetermined locations. A Jackson Laboratory (JAX) research team has identified how germ cells recruit and deploy precise DNA “cutting tools.”

Germ cells originate from a diploid parent cell, containing two copies of each chromosome, one copy from each parent. Unlike other cells in the body, germ cells undergo a unique event: During meiosis, germ cells undergo two specialized divisions to produce haploid cells, each containing only one copy of each chromosome; these form eggs and sperm. This division process is accompanied by breakage and exchange of parental chromosome segments, or "recombination," a process that reshuffles genetic information to creating genetic diversity, but also helps the chromosomes to separate, ensuring that each egg or sperm gets precisely the right number of chromosomes — no more and no fewer.

For meiosis and recombination to work, the chromosomal DNA must be broken at precisely matched locations in each pair of parental chromosomes. These double-strand breaks (DSBs) are not randomly distributed along chromosomes but occur in specific regions of the genome, called hotspots. Researchers including JAX Professor Kenneth Paigen, Ph.D., have established a role for a protein, PRDM9, in determining the locations of meiotic recombination hotspots. PRDM9 comes equipped with a molecular tool called a zinc finger array to bind to specific DNA sequences.

In research published March 7, 2019 in the Cell journal Current Biology, JAX Associate Research Scientist Tanmoy Bhattacharyya, Ph.D., with Professor Mary Ann Handel, Ph.D., and colleagues take the next step, showing how PDRM9 interacts with other proteins to not only mark hotspots but also initiate the mechanism to create DNA breaks at these sites.

They demonstrate that in mouse sperm precursor cells, PRDM9 interacts with specialized chromosomal axis proteins to recruit DSB-promoting proteins to the chromosome’s axis, positioning them where a meiotic enzyme, SPO11, creates the DSB that enables recombination.

“Double-strand DNA breaks have to work perfectly during meiosis, or the resulting egg or sperm cells will receive the wrong number of chromosomes and fail to function normally,” Handel says. “We are closing in on one mechanism to ensure chromosome quality control, which could provide valuable insights into fertility problems as well as developmental defects such as human Down syndrome.”