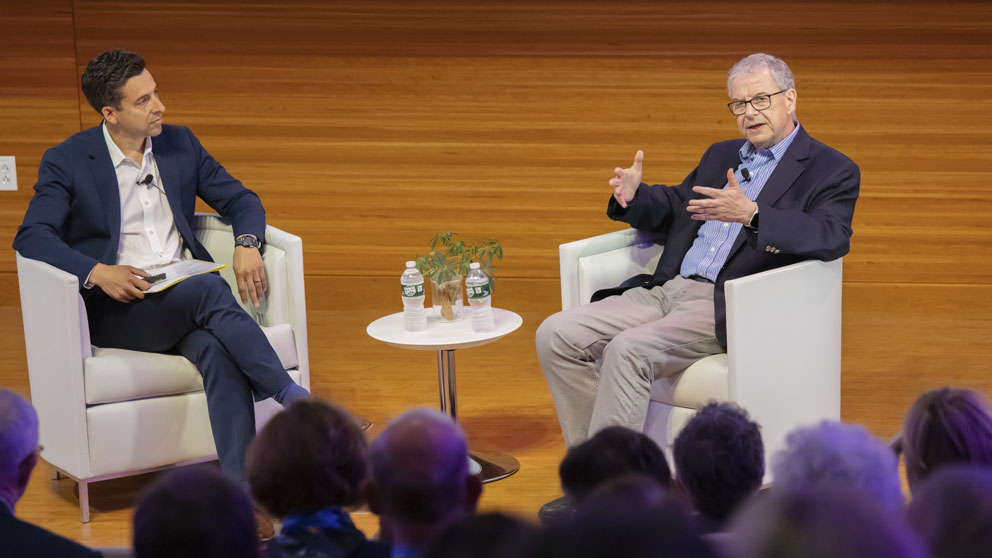 Miguel Ilzarbe, Director of Operations and Administration, and Professor George Weinstock, Ph.D., discuss how to harness the health benefits of the microbiome. Photo by Charles Camarda.


Our bodies contain trillions of microorganisms including bacteria, viruses, and fungi. During a JAXtaposition event at The Jackson Laboratory for Genomic Medicine in Farmington, CT, JAX Professor George Weinstock, Ph.D.Leverages advanced technologies to investigate infectious diseases, human and other mammalian microbiomes, and their clinical impact.George Weinstock, Ph.D. , and Director of Operations and Administration Miguel Ilzarbe discussed this biodiverse ecosystem, called the microbiome, and why it is so essential to our health.

Weinstock, who holds the Evnin Family Chair and is also the director of microbial genomics at the Laboratory, acknowledged that up until recently, there has been a culture of “germ warfare” in our society, with an inclination to control the microbiome by trying to rid ourselves of germs (brushing our teeth, using hand sanitizers, etc.).

“Overwhelmingly, the millions and millions of different types of organisms in and on us are doing something good, or they’re completely neutral,” he reminded the audience. “That’s the way to think about the microbiome. It’s part of the fabric of everything all around us, and within us too.”

“There is a massive amount of research going on now,” he said. “That means that in the next few years there will now be probiotics, prebiotics and others, that are based on hard science.”

What about the bad bacteria?

According to Weinstock, targeting the “bad bacteria” is “going to be part of the technology, absolutely.” He gave the example of cavities: we have a bacteria called lactic acid bacteria that colonize on the surface of our teeth, which overgrow when we eat a lot of sugar. When this particular type of bacteria overgrow, they produce an excess of acid, which can lead to holes in our teeth.

“This is an example of a bacterium that normally is doing things that are good for us. But if it grows too high, then you have a problem,” he explained.

Weinstock said in the future, we may be able to isolate a virus that could control a particular bacterium like lactic acid bacteria, so that if it becomes too high in concentration, it can be treated with the virus before it causes any cavities. “You wouldn’t have to wipe the bacteria out,” he said. “You would just need to knock it down in its numbers.”

“That's where microbiome technology can go in the future in medicine,” said Weinstock. “We can be very sophisticated and we can craft a lot of treatments, and it's all personalized medicine, to a certain extent, because it's your particular bacteria, your particular conditions.”

The role of next generation sequencing

Weinstock credited the increase in public interest in the microbiome to the advent of next generation sequencing. This revolutionary DNA sequencing technology allows an entire human genome to be sequenced within a single day.

“Next generation sequencing meant that you could take saliva, stool or a skin scraping, sequence all the DNA, run it through computers and figure out what all the organisms are based on their genetic signatures. That was a game changer because up until then, the only thing you could do is take a little bit of a sample, put it on a petri dish, and see what colonies grew.”

The challenge ahead of us, he said, will be to take the massive amount of microbiome information that we all have access to and figure out how to analyze and utilize it.

The key to healthy aging

Next, Weinstock is researching the relation between the microbiome and healthy aging. “Why do some people experience healthy aging and other people become frail and have more medical problems as they get older?” he said.

His hypothesis is that this has to do with the viruses that people accumulate through their life, called their “viral load.” “One of the things we've been able to show is that there is a larger viral load in elderly people than there are in young people,” he said.

Weinstock wants to know how that viral load causes inflammatory processes in the body as host defenses kick in, and how those chronic processes contribute to different medical conditions that arise as people get older.

The ultimate goal? To be able to predict medical conditions ahead of time based on this viral load, and intervene so that healthy aging becomes the norm.

The Jackson Laboratory is an independent, nonprofit biomedical research institution with more than 2,200 employees. Learn more about the Laboratory’s microbiome research here.