Interview: Li Jin and the future of human genotyping

The Human Genome Organization (HUGO) awarded the 2019 Chen Award for Distinguished Academic Achievement in Human Genetic and Genomic Research to Li Jin, Ph.D. Dr. Jin is a Haoqing-Fudan Professor of Genetics and Vice President at Fudan University (Shanghai) and was named a member of the Chinese Academy of Sciences in 2013.

Dr. Jin trained as a theoretical and experimental population geneticist, and his early career was spent characterizing the genetic structure and diversity of human populations around the globe, with a subsequent focus on east Asian populations. The research led him to question how human genetic diversity could be used to study the genes that underlie human disease. He is now leading the effort to develop the International Human Phenome Consortium (IHPC), a worldwide network that will implement a large-scale human phenotyping program to obtain a wide range of physical, chemical and biological metrics that can be applied to improving clinical care.

During the Human Genome Meeting in Seoul, where he accepted the Chen Award, HUGO had an opportunity to speak with Dr. Jin and discuss his goals for the IHPC and its value to the research community. 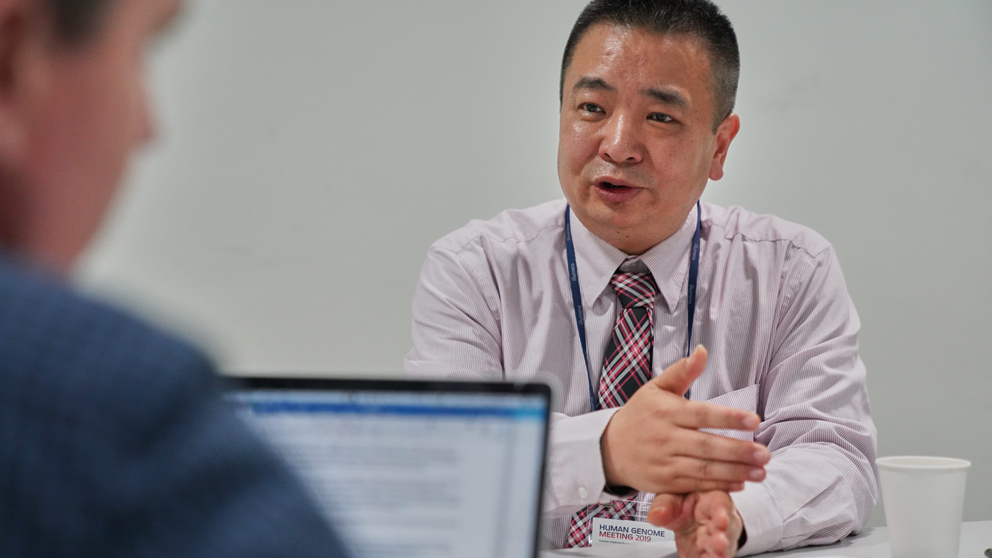 HUGO: You have a very strong background in population genetics, so how did your current focus on the IHPC evolve?

Li Jin: Through GWAS (genome-wide association studies) we learned about a large number of genetic variants that are implicated in human diseases, but we’re still able to explain only a small proportion of the heritability involved. Why is that? The complexity of the genome is one of the problems, and we think that the contribution of each genetic variant to the phenotype—the traits of the disease—is very small. To address this problem, GWAS studies are incorporating tens of thousands or even hundreds of thousands of samples, but there’s still the problem of missing heritability. There are also host contributions to disease, which means that after the genetics are taken into account, you also have lifestyle and environmental exposure variables. So these problems are difficult to solve by using genome-centric approaches alone.

Now, our ability to phenotype is growing, and people are paying more attention to different phenotypes, both at the macro and molecular levels. Earlier studies showed us that human phenomes [collections of all the different traits] are more structured than we’d thought, meaning that there are connections between phenotypes that we haven’t paid enough attention to. If we can conduct systematic phenotyping on a larger scale, we might be able to quickly identify the connections and associations within phenotype networks.

HUGO: How would knowing the phenome structure help?

Li Jin: The idea of the Phenome Project is that if you obtain a large amount of phenotype data, you will be able to make connections and build a map of phenotype networks. That will help us find unexpected connections or associations, and we may find that the same biological process underlies those phenotypes.

One example from our previous work is when we found a variation in a gene called EDAR. We didn’t know what the gene did, but we became interested in the variant because it was strongly positively selected in east Asian populations. It took us several years to find out what it did, and what we found was that it increases the density of sweat glands. It was only afterwards that we realized that east Asians have 15% more sweat glands than Europeans. With more work we found that it’s involved with other traits as well, including the shape of the chin and earlobes and the straightness of hair. So all these phenotypic traits are connected to a difference in a single gene.

Now, everyone has a different genetic background, so how much a genetic difference affects a phenotype can vary a lot at the individual level. That contributes a lot to the background noise in genotype-phenotype relationships. But with large-scale, systematic phenotyping data from a population, you can see how the phenotypes are connected.

HUGO: So the Human Phenome Project will operate at a population level.

Li Jin: That’s right. We want to have people from different parts of the world contribute to the project so we have data from multiple populations. Of course this makes standardization of the phenotyping procedures and consistent SOPs across sites very important, so that’s the first step.

HUGO: The navigation map? What is that?

Li Jin: Whatever you are working on, if you stumble upon a gene or a phenotype, you can ask what are the things that might connect to it. With a reference map, a navigation map to help you, you have an integrated resource to find out. For the Human Phenome Project, I think all we need to generate is a scaffold or a skeleton map to start. Then people in different fields and different parts of the world can refine the map with more information. Eventually it will become a knowledge base of phenotypes.

HUGO: How will you build the scaffold?

Li Jin: We have a pilot project in China supported by the Shanghai Municipal Government to begin with 1,000 people. We will start with 20,000 phenotypic measurements that can be measured right now.

Li Jin: Yes, and it is a lot of work! That’s why we need to work with our consortium partners and come to a consensus about standards and data management first. We are working with leading scientists in 16 countries now to build the consortium outside of China. Later, the data needs to be shared with the research community around the world.

HUGO: Will you be able to include clinical information?

Li Jin: I have given very serious thought to this issue, and at first we need to just pay attention to all the phenotypic measurements. I don’t think it’s a good idea to enforce the complete sharing of information at different levels, especially internationally. Later, we could encourage people who are providing phenotyping standards and SOPs to apply them to diseases in clinical studies.

HUGO: With all this human data, will we need model organism research, like in mice, any more?

Li Jin: Yes, everything has to go back to the animal model. Actually, this sort of approach, this systematic phenome measuring and analysis, was started with mice many years ago, so that is helping guide us now. And I see the goals of the Human Phenome Project converging with current mouse phenotyping projects to help us model disease better in mice, then go back to the human. It’s difficult because people sometimes can’t see how this collaboration could benefit their current research, but eventually I think they will go together.

HUGO: Where else do you see the project going after the initial two phases we have discussed?

Li Jin: One challenge for the future is to figure out how to do more in-depth phenotyping with low cost. For this reason technology development is very important, and we are already working on developing new phenotyping technologies. The other big challenge is data analysis. We are working on that also, trying to develop statistical and analytical tools designed for this purpose. We are now working on those building blocks.

It’s a big undertaking. But in all of biomedical research, the ultimate question is how to make connections between the molecular mechanisms and biological processes with the phenotypes that we are interested in. What really counts are the phenotypes. Those are the diseases.