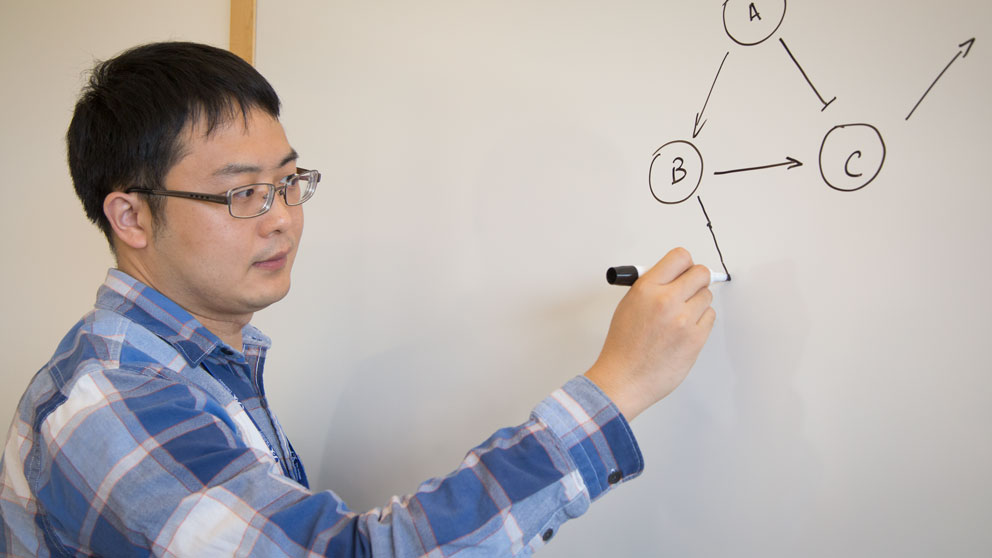 Cancer cells need energy. A lot of it. Their aggressive growth, not surprisingly, is therefore largely fueled by an abnormal metabolism.

In the presence of oxygen, normal cells produce energy in mitochondria through a pathway called oxidative phosphorylation. When energy needs are extreme, a pathway called glycolysis can provide it even in the absence of oxygen for a short burst. When weightlifters talk about “feeling the burn,” it’s caused by lactate in the muscles, a by-product of glycolysis. Cancer cells can utilize glycolytic pathway even in the presence of excessive oxygen, known as aerobic glycolysis. It generates ATP (the molecule that provides us with energy) at a rapid clip, but it can be sustained over time. And it fuels the growth of tumors, their ability to resist therapies, and their spread to different areas of the body through metastasis.

But that’s not all. Recent research has shown that cancer can also use the oxidative phosphorylation pathway. But how do they switch from one metabolic state to another? And can they use both at the same time? In “Elucidating cancer metabolic plasticity by coupling gene regulation with metabolic pathways,” a paper published in the Proceedings of the National Academy of Sciences, a team led by Herbert Levine, Ph.D., and including former JAX Assistant Professor Mingyang Lu, Ph.D., reveal the mechanisms involved with cancer’s so-called metabolic plasticity. They also show that yes, cancer cells can leverage both glycolysis and oxidative phosphorylation in a stable hybrid metabolism, using gene regulation to orchestrate how the different pathways are used to facilitate malignancy.

The researchers developed an extended computer model to couple gene activity with metabolic pathway activity. They focused on key components of the metabolic pathways to determine whether one or the other was dominant, or if it was in a hybrid metabolic state. Their predicted associations were confirmed with metabolomic and transcriptomic data from a breast cancer patient cohort and RNA sequencing data from The Cancer Genome Atlas. They also worked directly with two triple negative breast cancer (TNBC) cell lines to confirm that metastatic TNBC cells can acquire a stable hybrid metabolic state.

The paper’s findings indicate that cancer cells are able to adjust their metabolisms in response to their immediate environments. This provides the ability to use different kinds of fuel, and the cells can avoid DNA damage due to excessive reactive oxygen species. The hybrid state may also aid in metastasis, allowing the cells to adapt and proliferate in a variety of in vivo conditions. The study indicates that targeting abnormal metabolism to treat cancer will require an understanding of the metabolic plasticity present and necessitates modulating multiple metabolic pathways.