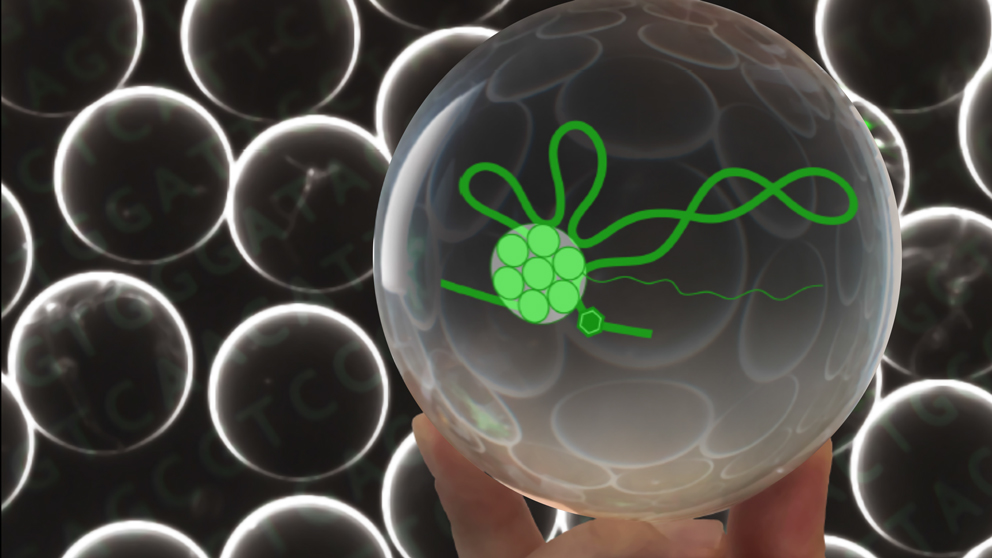 While we often think of DNA in terms of linear sequence—AGTCTTGGACGT and on and on—in reality it’s arranged in highly organized three-dimensional structures. It has to be. All the DNA in one cell, if stretched straight, would total more than six feet (or about two meters) in length. And it must fit into a cell’s nucleus, which in humans averages only six micrometers (.000006 meters) in diameter. One might say that it’s one heck of a packing job.

The DNA and its associated packing materials, such as proteins called histones around which DNA is wound, are known collectively as chromatin. The ways in which chromatin is arranged can have significant biological consequences. Genomic regions that are separated by thousands or even millions of base pairs in a sequence may loop around to be next to each other physically. The 3D structures play important roles in gene expression and regulation, as promoter binding sites can become more or less accessible depending on chromatin configurations or the region of the nucleus in which they’re located. Recent work is providing a clearer picture of chromatin structure and its functional consequences.

While DNA sequencing has advanced with breathtaking rapidity, determining exactly how chromatin folds and loops within a nucleus has remained a challenge. Current 3D mapping methods include proximity ligation and high-throughput sequencing (Hi-C) and chromatin immunoprecipitation (ChIA-PET). These methods provide information about genomic areas that are frequently in proximity across large numbers of cells, but they paint with a broad brush, and many details regarding chromatin interactions have remained unclear. In “Multiplex Chromatin Interactions with Single Molecule Precision,” published in Nature, a new strategy is presented for capturing complex chromatin interactions with unprecedented resolution.

The method, called ChIA-Drop, applies recent advances in microfluidics for droplet-based, barcode-linked sequencing. The nano-droplets can be thought of like miniature crystal balls, allowing researchers to see complex chromatin interactions with a precision not possible with previous methods. The team characterized regions commonly in contact to each other and in active gene domains in Drosophila cells. The method compared favorably with Hi-C and ChIA-PET, and, unlike them, it was able to resolve multiplex chromatin interactions—that is, complexes that contain multiple chromatin fragments, with some incorporating hundreds of fragments—at the single-molecule level.

Although the paper focuses on the method, the work done to validate it provided evidence for two specific mechanisms of transcriptional coordination in chromatin complexes that involve multiple genes. The single-molecular precision of the chromatin contact data by ChIA-Drop also enabled the authors to postulate a new model of chromatin folding during gene transcription. The authors anticipate that ChIA-Drop will be rapidly adopted due to its robustness for a wide range of research applications into transcription, regulation of gene expression and more to investigate the dynamic, three-dimensional nature of chromatin structure and function.