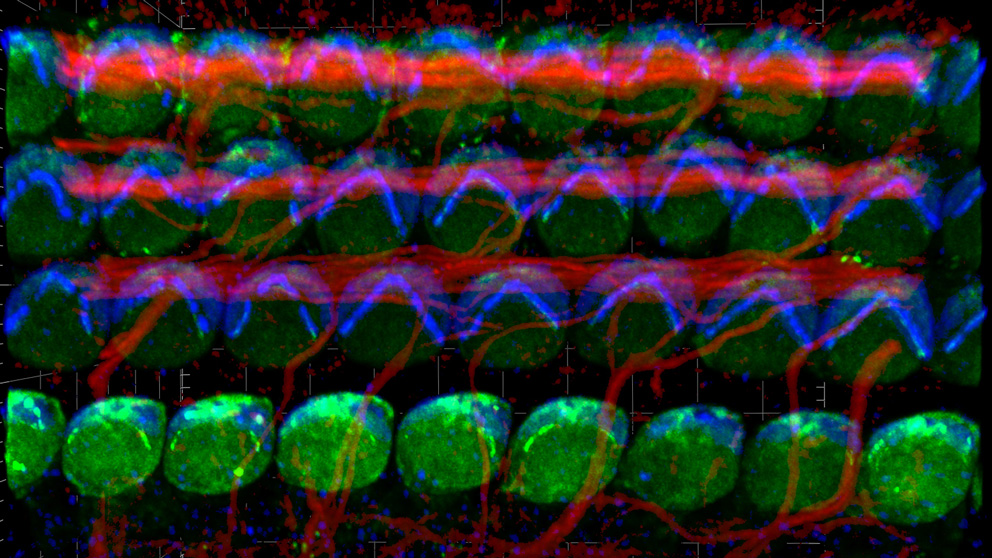 In the cochlea, the snail-shell-shaped structure in the inner ear, about four thousand specialized sound receptors called inner hair cells convert vibrations into electrical impulses that are sent to the brain.

Previously, Basile Tarchini, Ph.D.Investigating inner ear development, focusing on the role of cytoskeleton polarization in sensory function and hearing loss, with a goal to inform therapies for sensory cell regeneration.JAX Assistant Professor Basile Tarchini, Ph.D., discovered two proteins—LGN (also called GPSM2) and Gαi—that play a key role in the surface architecture of these sensory hair cells. These proteins aid in the development of hair-like motion sensors, called stereocilia, that sit atop the cells. Stereocilia are arranged in bundles in a stepwise fashion—the smallest at one end and the tallest at the other—, and this graded organization is essential for their motion-sensing ability.

In a paper titled "Intrinsic planar polarity mechanisms influence the position-dependent regulation of synapse properties in inner hair cells" published online in the Proceedings of the National Academy of Sciences, Tarchini and colleagues from University Medical Center Göttingen in Germany have now found that the same proteins influence the spatial distribution of synapses at the bottom of the cell. Synapses are specialized regions where neurons contact inner hair cells to relay sound information to the brain.

While Tarchini’s expertise relates to the motion sensors at the top of these sensory cells, his German collaborators focus on the connectivity of hair cell and neurons at the synapses on the other end. Together, they sought to determine if proteins that specify stereocilia development could also dictate the spatial arrangement of the synapses at the opposite end.

“We were curious to see if the molecular mechanisms that shape the polarized architecture of the motion sensors at the top also influence the distribution of the synapses at the bottom,” says Tarchini.

Through a variety of experiments, Tarchini and his colleagues discovered that, somewhat similar to the graded heights of stereocilia, the activity of LGN-Gαi is required for the heterogeneous nature of the synapses. For example, one side of the hair cell has larger synapses, with different properties, than the other side.  LGN-Gαi, says Tarchini, is not responsible for the existence of the synapses, but rather for their graded distribution from side to side. Many neurons contact a single inner hair cell at distinct positions, called active zones, and different neurons are thought to relay soft or loud sounds from distinct active zones, for example. That, says Tarchini, is likely how we can hear a wide range of soft or loud sounds at the same frequency. The same hair cells, or group of hair cells, would be involved, but neurons with variable sensitivity would contact functionally distinct active zones.

In a 2016 study, Tarchini demonstrated that mouse models lacking LGN or Gαi have stunted stereocilia that largely lack a graded height architecture , leading to severe hearing deficits in Chudley-McCullough syndrome, a hereditary condition that results in sensorineural hearing loss at birth. By showing that LGN-Gαi proteins are also required to establish a spatial gradient of synaptic properties, this new study suggests that rescuing stereocilia architecture might not be sufficient to restore proper hearing. Even if sound capture at the top of the inner hair cell was normal, abnormal functional pairing between a single hair cell and its connecting neurons might lead to an inability to distinguish the full range of sound intensity.