A unique study investigating the onset of type 2 diabetes gathered massive amounts of multi-faceted clinical data from more than 100 people, many of them at risk for diabetes, over the course of four years. In addition to genomic sequencing, the patient samples were subject to analyses into microbiome characteristics, gene expression, metabolic states, proteins, and more. The researchers determined baseline traits for each individual, which stayed relatively constant but varied considerably from person to person. They also tracked one person who developed clinical type 2 diabetes during the study in exhaustive detail. Published in Nature, the study sets a new precedent for understanding the development of a complex disease, and it provides a trove of data for ongoing research. 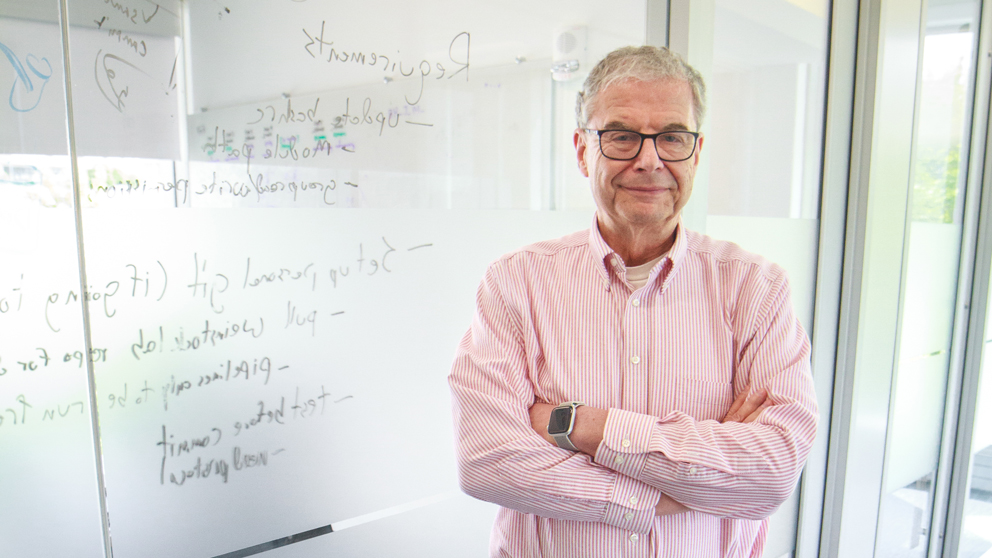 Microbiome researcher George Weinstock outside his office in Connecticut. Photo by Jared Skolnick.

Type 2 diabetes is something of a clinical research nightmare.

In general, research into its myriad variables and weak associations has yielded few insights to improve the medical landscape. Changing the situation requires a new approach, and a team led by Jackson Laboratory Professor and Evnin Family Chair George Weinstock, Ph.D.Leverages advanced technologies to investigate infectious diseases, human and other mammalian microbiomes, and their clinical impact.George Weinstock, Ph.D., and Stanford University’s Michael Snyder, Ph.D., has employed an intriguing one that they call “longitudinal multi-omics.”

For a recent study, they intensively investigated a group of people, many with prediabetes (meaning they’re at high risk of developing type 2 diabetes), over a period of four years. They gathered massive amounts of data from each person, and they determined both baseline traits and how some of them changed over time.

The research was part of the second phase of a National Institutes of Health program called the Human Microbiome Project (HMP2 for short), so the researchers didn’t just look at the people. They looked at their microbial communities, collectively known as microbiomes, and their interactions with host immune and other systems as well. The results, “Longitudinal multi-omics of host-microbial dynamics in prediabetes,” published in Nature, provide an intriguing look at prediabetes, microbial roles, and possible mechanisms of progression to disease.

Type 2 diabetes is a serious and growing problem. The American Diabetes Association estimated that in 2015, more than 29 million Americans had type 2 diabetes, and it was the seventh-leading cause of death. It cost $327 billion a year in medical expenses and lost productivity in 2017, and its incidence is increasing. There are many complications, some of which can be severe, including heart disease, nerve damage, kidney damage, eye damage, sleep problems, and more.

Also, while its general hallmarks are quite well known—increasing insulin resistance in the tissues that leads to high blood glucose levels and progressive pancreatic islet dysfunction—the onset of type 2 diabetes depends on a huge number of variables. Poor diet and a sedentary lifestyle are known to increase risks, but significant contributions also come from other environmental and behavioral factors, genetic susceptibility and immune response, and a person’s microbiome. For these reasons and others, researchers have been unable to determine the exact pathways involved with disease development. Not surprisingly then, doctors still cannot predict who will develop type 2 diabetes. And while therapies are available to help patients manage the disease, there is no cure.

We are not alone

The microbiome, composed of the trillions of microbes (bacteria, viruses, fungi, archaea) in and on us, has come under increasing scrutiny. And there is growing evidence that the microbiome plays important and diverse roles in wellness and many diseases. The original Human Microbiome Project, begun in 2007, gathered and characterized microbiome samples from many sites on a large number of people. It yielded a valuable catalog of data, but how the microbiome actually influences health remains largely unknown. Therefore, HMP2 looked at microbial dynamics in the context of dysfunction and disease. In addition to type 2 diabetes, different research teams also investigated pre-term birth and irritable bowel disease.

Earlier research showed that diabetics have microbiome signatures that differ from those of healthy individuals. Also, the onset of diabetes has been linked with stresses, such as viral infection. But why this is and the biological mechanisms involved are unknown. To learn more, Weinstock, Snyder and colleagues worked with 106 volunteers (51 males, 55 females), of whom 51 were prediabetic and nine were diabetic. Numerous baseline and targeted tests and measurements were performed on each volunteer, including nasal and stool microbiome sampling. In addition, 66 were tested for insulin resistance versus insulin sensitivity, and 35 were found to be insulin resistant, an important hallmark of type 2 diabetes. The work yielded a dataset containing millions of measurements, and 83 participants consented to make their data open access.

The baseline data support earlier research to comprehensively measure human traits indicating that each person’s baseline measurements stay relatively stable, but they differ significantly from person to person. To put it a different way, one person’s normal can be quite a bit different from another person’s normal, even when both are healthy, which can make population averages misleading for disease detection and management. This includes the makeup of our microbiomes, which exhibit strong interpersonal differences but stay relatively consistent within individuals.

The longitudinal nature of the study provided a powerful opportunity to observe how baselines may change, however, and the research team was able examine dynamic changes to both host molecular pathways and microbial communities during immune perturbations. They investigated these changes during respiratory viral infections and immunization and found effects in many areas following viral infection, including neurological and cardiac as well as metabolic. The metabolic findings also included negative changes to insulin signaling and other pathways associated with diabetes. Interestingly, the participants who received flu vaccines during the study showed positive changes in diabetes risk pathways, suggesting a protective effect.

The research also showed that insulin sensitive and insulin resistant groups differed both at baseline and during infection. Importantly, the resistant group had an impaired and delayed immune response to viral infection, and the impairment can also lead to chronic inflammation, increasing the risk of developing diabetes. The microbiomes of the two groups also differed in response, with those of the resistant group exhibiting a milder response than those of the sensitive group. Finally, one individual progressed to a type 2 diabetes diagnosis during the study, and changes in immune signaling molecules, as well as a decrease in gut microbial diversity and a weight increase prior to diagnosis, provided indicators of disease onset. While it’s not feasible to generalize one person’s specific measurements, the finding does show the value of acquiring baseline measurements and tracking individuals at an individual level.

The paper findings underscore just how complex and dynamic the host and microbial data landscape is during health and disease. It shows how deep, multi-omics measurements enable the investigation of the early molecular signs of disease, at least at the individual level. Future work will add greater understanding of the mechanisms of disease development at larger scales, providing insight for more effective type 2 diabetes preventatives and interventions.