Jumping genes and where to find them 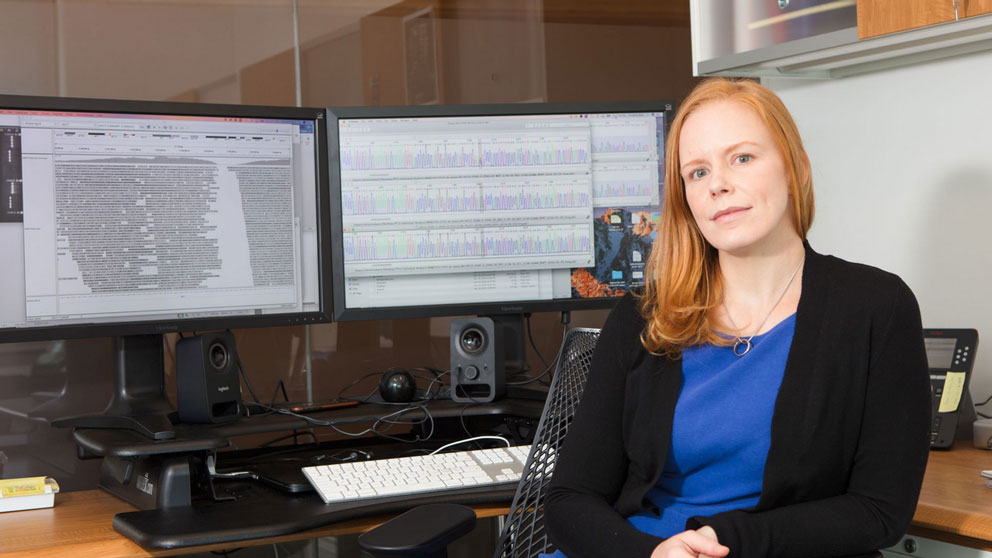 Assistant Professor Christine Beck, Ph.D., is uncovering how recurring sequences in our genomes might shed light on genome stability, as well as diseases like cancer.

Until just a few decades ago, biologists referred to large portions of the human genome as “junk DNA.” Anything that didn’t end up being translated into a protein wasn’t worth bringing to the lab bench. The persistent existence of so much non-coding DNA was baffling – why didn’t evolution take out the trash as it went along? – but uninteresting to most people.

A lot of the beauty in our biology is in the smaller, more nuanced things that people initially cast off as uninteresting.

Eventually, however, the non-coding “junk” turned out to make crucial contributions to genetic variation. In particular, much of this non-coding genetic material consists of transposons, or “jumping genes.” These quirky segments of DNA can copy or cut and paste themselves into new locations within the genome, causing disruptions that occasionally have dramatic consequences such as cancerous mutations or serious genetic diseases.

A single person may have over a million copies of certain transposons scattered throughout their genome. Assistant Professor Christine Beck, Ph.D., who joined The Jackson Laboratory (JAX) in August 2017, is investigating how these mobile, repetitive sequences affect basic biology and human health.

“People discount regions of DNA as junk because they don't think that repeats are interesting or that they can lead to phenotypic consequences,” Beck says. “At the end of the day, a lot of the beauty in our biology is in the smaller, more nuanced things that people initially cast off as uninteresting.”

Beck describes her own path to transposon research as “agnostic.” Her childhood love of math and science hadn’t crystallized into a career path by the time she arrived at Iowa State University for college; even as she graduated four years later with a degree in biochemistry, she didn’t have a research focus in mind.

She took a job as a technician in a laboratory that produced specialized viruses. Quickly realizing that she loved all research-related aspects of her job, she found she wanted to have more of a say in the work she was doing.

“As a technician, I wasn’t able to come up with my own questions and answer them in the ways that I thought would be really interesting,” she remembers.

In order to chase after those answers, Beck left the technician position to pursue a Ph.D.

“I could tell she really wanted to get her graduate degree” says former mentor John Moran, Ph.D., of the University of Michigan. “Once she realized her project was a good one, she really drove to the finish line. She has a lot of tenacity and curiosity.” 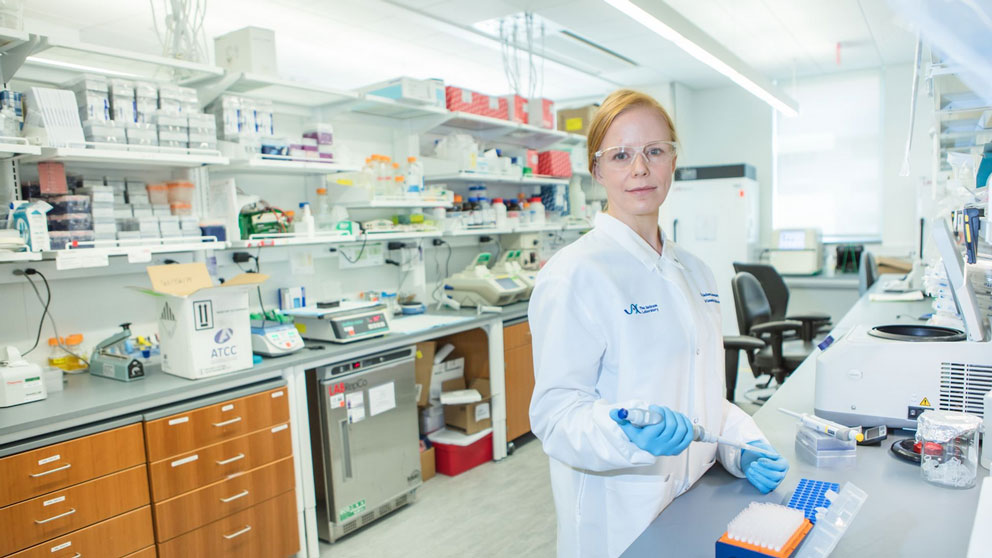 When transposons move around, they sometimes copy and paste themselves right into the middle of a protein-coding gene. This insertion is essentially a mutation in the gene, and it can therefore change how the protein works or prevent it from functioning entirely. Viruses use some of the same techniques when they infect host cells, and that similarity is what led Beck to pursue transposon research as a Ph.D. student in Moran’s lab.

“I was interested in what makes these things tick,” she says. “Then I became interested in population genetics and genomics, and that kind of led me to the path where I am today.”

Beck moved to Baylor College of Medicine to complete her postdoctoral work, which included studying mechanisms of genomic rearrangements. From there, she found a research home at JAX, where she is zeroing in on finding where and how specific transposons make changes to the human genome.

“She really has fantastic opportunities at JAX,” says Moran. “Her judgment and the way she assesses the quality of science is something that’s truly grown. She’s now a full-force, card-carrying scientist. I’m looking forward to watching her build her lab.”

Beck says that identifying regions of the genome that are more susceptible to transposon-related disruption could be important for finding the causes of genetic diseases that appear at birth, as well as for identifying potential danger zones where disruption and rearrangement might lead to cancerous growth.

Based on what she’s already found, she hypothesizes that transposons might destabilize genetic material by potentiating regions of the genome to aberrant DNA repair.

In the long term, Beck is excited to study how repetitive sequences like transposons contribute to various forms of genomic instability, and how they might be useful for future therapeutic approaches for cancer patients. With greater understanding and control of transposon sequences and pathways, scientists might be able to throw a wrench in cancer growth by exploiting them to destabilize cancer cell genomes.

Beck emphasizes the importance of conducting thorough basic biology research as a sturdy foundation for any potential future extrapolation to medical applications.

“If you don't understand the impact of over 50 percent of the human genome on basic structure, function, and stability of human DNA, then you set yourself up for really not understanding a large of swath of the science of human genomes,” she says. “Without that knowledge, we can take things forward toward developing therapeutics, but then at least some of it will be based on poor information.” 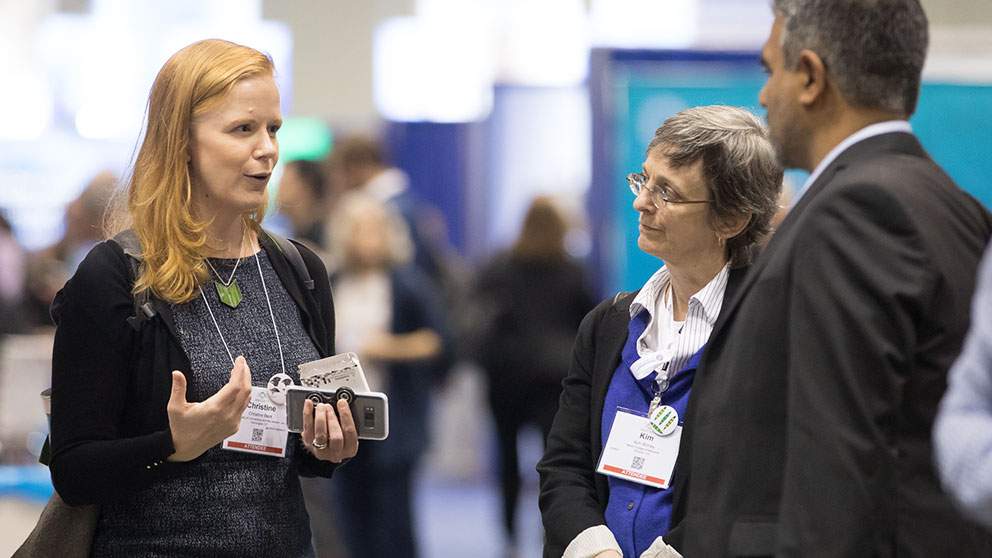 Christine Beck, Ph.D., chats with colleagues at the 2017 American Society of Human Genetics conference in Orlando. Photo by Tiffany Laufer.

A future at JAX

In order to tackle the mysteries of transposons from as many angles as possible, the Beck lab straddles the worlds of computational analysis and “wet bench” work with cells and other biological materials. Beck also embraces opportunities to collaborate with other labs within JAX, including a newer Liu lab study on genetic rearrangement in breast cancer.

When searching for new lab members, Beck says, “I look for people who aren't afraid to learn computational techniques and apply those to larger sets of genomic data. But I also want people who conduct experiments at the bench and are comfortable with the failure rates of both sides of the science.”

“The biggest thing that I look for is fearlessness,” she continues. “You can have all the techniques in the universe in your tool chest, and then if a new methodology comes out and you're not good at troubleshooting through the difficulties that come your way, then you're not going to be able to figure out how to utilize new techniques, and will not move your research forward.”

In less than a year, Beck has created a bustling lab characterized by infectious enthusiasm for science. Lab member Denisse Tafur, Ph.D., describes her new principal investigator: “I personally like the fact that she encourages me through difficult troubleshooting, has positive criticism, and embraces unexpected data.”

Reflecting on what keeps her coming back to the lab every day, Beck says it’s important for her to know she and her coworkers care deeply about their work. Tafur echoes her sentiments, saying, “I find my motivation in the thought that maybe this is the day I could find something interesting that could change the life of others. If it’s not today, I want to keep trying!”