Of mighty mice and men 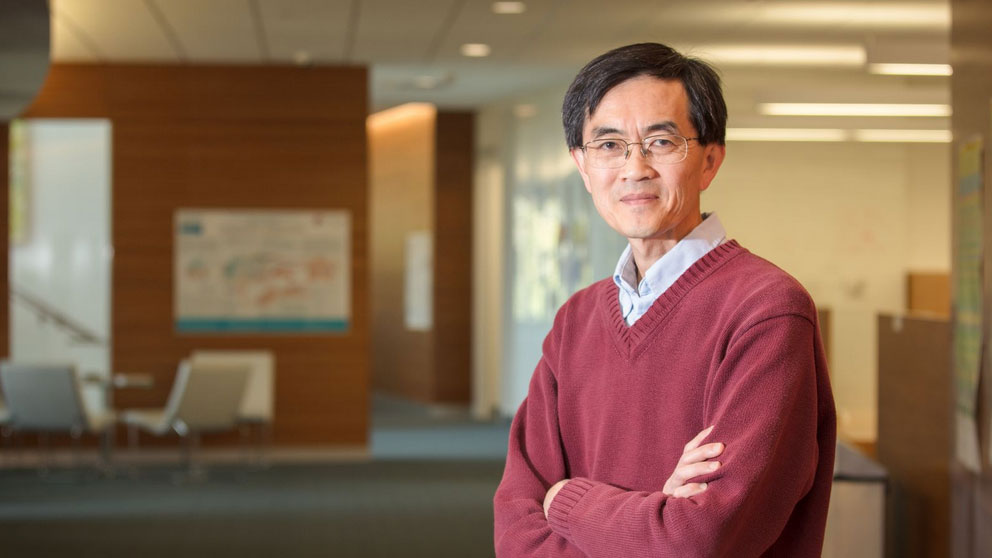 Pioneering scientist Se-Jin Lee, a leader in the study of muscle development, moves his groundbreaking research program to JAX

Iconic images can conjure memories of pivotal times. This is not only true in history but also scientific research. A case in point: In May 1997, the scientific community was abuzz with news of an extraordinary strain of mice. Engineered to lack a single gene, the mice developed with striking muscular builds, sporting more than twice the amount of skeletal muscle relative to their normal counterparts.

This revelation spurred a decades-long effort led by a visionary scientist named Se-Jin Lee, M.D., Ph.D.Regulation of mammalian development and adult tissue homeostasis by growth and differentiation factorsSe-Jin Lee . He and his team dissected the biology of the culprit gene, which they named “myostatin” for its role in suppressing muscle growth. Lee devoted his early career to laying bare the biology of myostatin and its relatives — part of a large group of molecules known as the transforming growth factor beta (TGFß) family. These proteins play diverse roles not just in muscle development, but in a multitude of biological processes, from establishing the body’s basic pattern during the earliest stages of life to guiding the proper form and function of organs like the kidney.

It's an evolutionary vestige that we don't need so we can tamper with it all we want. To me, that's the beauty of targeting this pathway for therapeutic uses.

Now, more than twenty years after he unveiled his mighty mice, Lee has joined the faculty of The Jackson Laboratory (JAX) and UConn Health. As a professor at JAX and Presidential Distinguished Professor at UConn School of Medicine, he will continue his pioneering studies of the role of myostatin in muscle development and maintenance. He will also apply his extraordinary know-how to studies of another important realm of human biology: aging.

“There are some significant challenges to studying aging in mice,” said Lee. “But with the remarkable resources and expertise at JAX, I think we have a real opportunity to move aggressively in this area and reveal the key molecular signals that regulate aging at the cellular and tissue levels.”

A host of devastating diseases specifically target muscles, including degenerative disorders such as muscular dystrophy, which gradually extinguishes the body’s fundamental capacity for movement, sometimes with grave consequences. At the same time, there is a long list of illnesses in which muscle is an unwitting bystander: diseases like cancer, kidney failure, sepsis, chronic obstructive pulmonary disease (COPD), and many others. Yet all of these represent conditions that might be helped by a myostatin-based therapy, seeking to repair muscles lost, withered, or otherwise ravaged by disease.

While it is still too early to know whether these newer efforts will lead to a successful drug, their end goal — targeting myostatin and boosting muscle mass in humans — is proving more complicated than first believed. “It is clear that blocking this pathway does work in humans to increase muscle mass, but the magnitude of the effect in humans is nowhere close to what we’ve seen in mice,” said Lee.

He added, “I think the jury is still out as to whether the effects people are seeing are going to be enough to provide a therapeutic benefit. But at the end of the day, there’s still lots of science to sort out in terms of how the myostatin pathway works — its various components and their physiologic effects, so that’s what we’re focusing our efforts in the lab. I think that continuing to focus on the science will be critical for identifying those indications that might be most responsive to this therapeutic approach and for developing the most effective drugs targeting this pathway.” 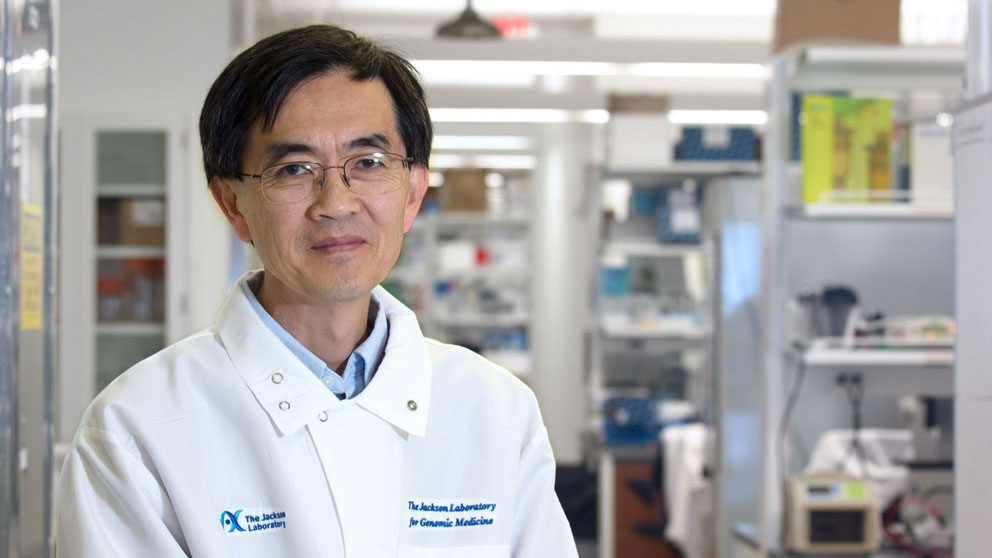 Se-Jin Lee is an internationally renowned geneticist who is focused on discovering causes and cures for muscular degenerative diseases. Photo by Charles Camarda.

One of the big unresolved questions swirling around myostatin is which cells in the body it acts on. “When we first reported our work on myostatin, everybody and his brother said, ‘Well, the way it must work is to regulate the muscle stem cells,’” recalled Lee.

Muscle stem cells, also called satellite cells, normally lie dormant within the muscle. But when the tissue is injured or strained, the satellite cells proliferate and then fuse with existing muscle fibers, allowing them to heal and grow.

Studies of cells growing outside the body in artificial conditions — so-called in vitro studies — have suggested that myostatin can send signals to satellite cells, but there is accumulating evidence, particularly from studies of cells living inside the body by Lee’s team as well as others, that suggest that myostatin can signal directly to the mature muscle fibers. Furthermore, these studies have also suggested that satellite cells may not be required for muscle growth, and may even inhibit the myostatin pathway.

“This is still an open and controversial question,” said Lee.

Another important and unexplored question is, what are the evolutionary benefits of myostatin? The myostatin protein is virtually indistinguishable in diverse species — human and chickens, for example, harbor identical versions. This striking conservation implies there are forces at work to help preserve myostatin’s molecular identity through evolutionary time. But why? And to what benefit?

Lee’s hunch is that myostatin’s evolutionary significance has something to do with achieving the right balance between muscle and fat levels in the body. “Metabolically speaking, muscle is very expensive to maintain. If I’m living in the wild, I don’t want more muscle than I absolutely need. I also want some fat around so I can burn it for fuel when food is scarce,” he said

Of course, these metabolic demands are much less substantial in modern humans, for whom food is vastly more abundant and predators less common. Yet the myostatin protein persists. “It’s an evolutionary vestige that we don’t need so we can tamper with it all we want. To me, that’s the beauty of targeting this pathway for therapeutic use.” 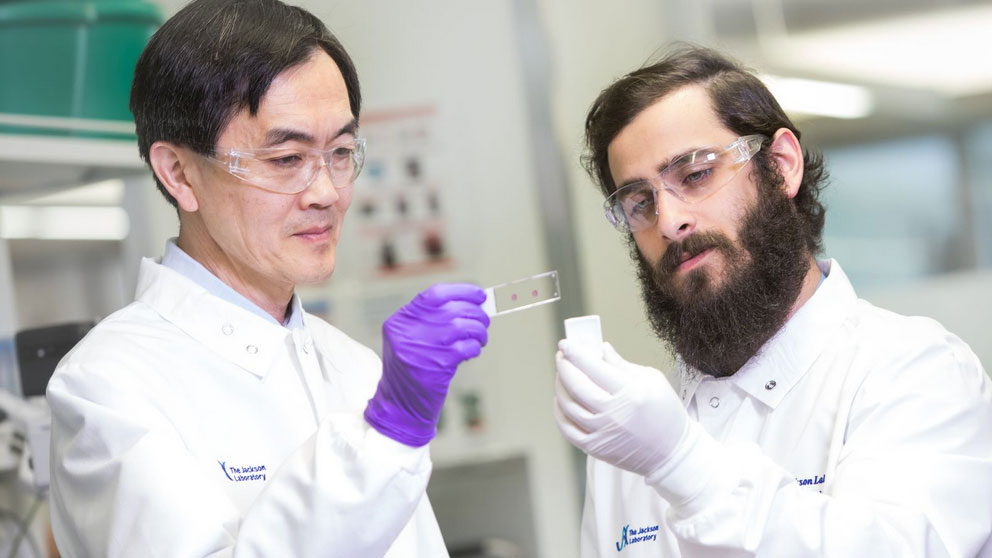 Now that Lee has arrived and settled in at JAX, he will continue his team’s ongoing studies of myostatin, while also expanding into other key areas, such as metabolic diseases, including diabetes, as well as aging.

The latter topic is particularly compelling to Lee. Mounting evidence points to the role of the TGFß family in cell and tissue aging, particularly in promoting aging, but the details are obscure. While it is likely that multiple TGFß family members are involved, precisely which ones and how many remain unclear.

Thus, Lee is launching a bold, collaborative effort focused on the TGFß family and their regulators. By harnessing the extraordinary tools, resources, and expertise at JAX, the researchers will study an array of mice at multiple different ages — both normal mice as well as mice engineered to lack specific genes. The animals will be screened with a battery of blood and physiologic tests, assessing the overall health and vitality of basic body systems, including the bones, heart, muscles, and metabolism.

“There’s so much to be gained by taking this kind of approach,” said Lee “For many of these molecules, their functions, particularly in adult stages, are not well understood. So there’s still a lot of biology to be uncovered.”

Our project will serve as a model for thinking about deregulated signaling pathways that are important for normal biology and also go awry during aging.

This ambitious project, which recently garnered funding from the NIH, stems in part from a striking observation made in 2005 by Thomas Rando and his colleagues at Stanford University. The researchers found that connecting the circulation of a young mouse with that of an older one could rescue aging in various tissues. This finding suggests that substances swirling around in the blood can impact the aging process.

Now, Rando and Lee are joining forces to uncover these factors. Although they are casting a wide net, they are particularly interested in identifying TGFß family members that are working to promote aging. Such proteins should be fairly straightforward to block using drugs or other molecular inhibitors.

“Our project will serve as a model for thinking about deregulated signaling pathways that are important for normal biology and also go awry during aging,” said Rando. “With this comprehensive genetic approach, we can begin to get a more holistic view of the TGFß pathway. It’s a way to map out complexity in the context of tissue aging — no one has really done that.”

Rando and Lee have been friends and colleagues for many years, but only now have the means and opportunity to work together. “There are few people I prefer to work with,” says Rando. “Se-Jin is a true scholar and expert in every sense. He’s a scientist’s scientist — it is a true privilege to work with him.”