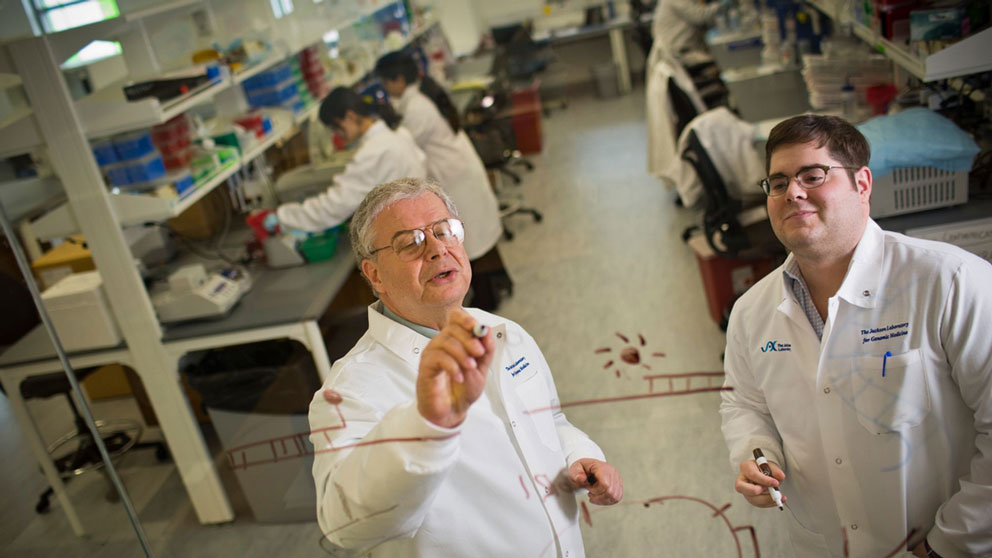 The National Institute on Drug Abuse has made a $4M grant to JAX scientists to explore the roles of the microbiome and genetics in substance use disorders.

The National Institute on Drug Abuse (NIDA) has funded a bold new approach to understanding the biology of substance abuse, with a five-year grant totaling $3,967,656 to Jackson Laboratory (JAX) researchers exploring the role of the microbiome and genetics in substance use disorders.

Substance abuse takes a terrible toll on the nation’s health, security and economy. In 2015, an estimated 20.8 million Americans aged 12 or older had alcohol or other drug use disorders, while another 27.1 million people reported past-month illicit drug use. NIDA estimates the annual cost of abusing tobacco, alcohol and illicit drugs at about $700 billion.

This study will be the first to delineate the genetic basis of drug addiction by integrating host genetics and the gut microbiome.

A number of genes have been associated with addiction, and there is accumulating evidence that the gut microbiome — the vast collection of microbes that inhabit the digestive tract and interact with the host — plays a significant role in behavioral response to addictive drugs, as well as anxiety- and depression-like behaviors, many of which occur with addiction.

“This study will be the first to delineate the genetic basis of drug addiction by integrating host genetics and the gut microbiome,” says George Weinstock, Ph.D.Leverages advanced technologies to investigate infectious diseases, human and other mammalian microbiomes, and their clinical impact.JAX Professor George Weinstock, Ph.D., Evnin Family Chair and director of microbial genomics, and one of the world’s leading authorities on the microbiome. “If our hypothesis is confirmed, it is likely to lead to deeper insights into the mechanism of drug addiction and provide novel therapeutic targets.”

Weinstock and Jason Bubier, Ph.D.Integrating behavioral data across species and making it computable and accessible to the research community.Research Scientist Jason Bubier, Ph.D., an expert in mouse genetics and large-scale genomic databases, are the principal investigators of the new grant. Their studies will focus on the effects of cocaine, a powerfully addictive stimulant drug that hijacks the body’s natural reward system by increasing the levels of dopamine in brain circuits.

“Abuse of cocaine is a serious problem in America,” says Weinstock. “Cocaine is involved in more than a third of emergency-room visits for drug misuse or abuse. And because it shares characteristics with many other addictive substances, our findings could apply to opioid and other addictions.”

The researchers will take advantage of special, genetically diverse mouse populations developed at JAX. Bubier says, “The combination of the unique mouse resources and microbiome expertise available to us at JAX provides a powerful opportunity to examine the relationships between mouse genetics, the microbiome and addiction.”

Bubier works in the laboratory of  The Chesler Lab Researches the genetics underlying behavior and identifies relationships among behavioral traits.JAX Professor Elissa Chesler, Ph.D., director of the Laboratory’s NIDA-funded Center for Systems Neurogenetics of Addiction. Chesler comments, “The microbiome and metabolites that are produced by gut microbes are known to influence multiple behaviors in mice. To date, we have very little information on how gut microbes are involved in addiction, and this project is an exciting step forward in our effort to discover which aspects of host and microbe interact to influence addiction.”