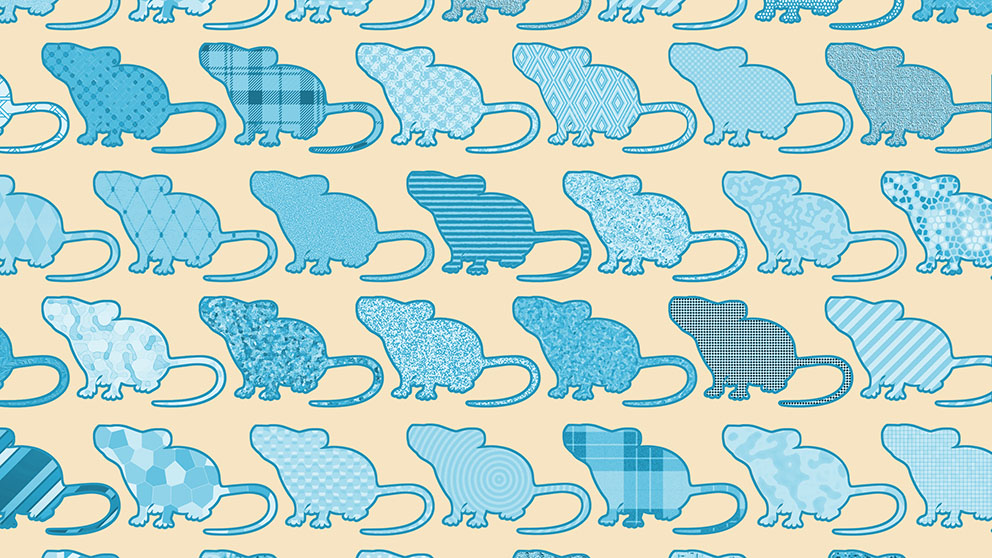 Alzheimer’s disease (AD) is a significant and growing health issue. At this time, an estimated 5.5 million adults over the age of 65 have AD in the U.S. alone. The disease burden is forecast to double by 2060.

Hallmarks of AD include accumulation of protein aggregations, called beta-amyloid plaques and tau tangles. They are thought to disrupt neuron function in patients’ brains, leading to cognitive and other problems and, ultimately, death. Much of the effort around therapy development has revolved around trying to reduce or eliminate beta-amyloid plaques. Indeed, some candidate drugs have been quite effective at plaque reduction, but none has affected disease progression. It’s understandable therefore that researchers are looking to implement new tools and ideas for AD research and therapy development.

To date, most mice used for AD research have been maintained on one or few genetic backgrounds. But humans don’t possess such genetic consistency. Even patients with known genetic mutations that cause relatively rare early-onset familial AD (FAD) show variation in time of disease onset and progression, indicating that other genetic factors affect the course of the disease. And for the much more common late-onset Alzheimer’s disease (LOAD), the so-called “background” genetics can play a larger role still in disease susceptibility and trajectory.

Dr. Kaczorowski, Evnin Family Chair in Alzheimer’s Research at JAX, and Neuner worked to develop a mouse population that would model both human AD as well as human genetic diversity at the same time. For this purpose, the team used a well-established AD mouse model that carries human FAD mutations on an inbred mouse background. They crossed these inbred mice with a genetic reference panel known as the BXD, which carries more than 4.8 million sequence variants.

The result, as published in a paper published online in Neuron on December 27, is a mouse panel called AD-BXDs. These mice harbor identical high-risk FAD mutations in human genes but have highly variable genetic contributions across the remainder of the genome. The exacting and long-running project was supported by the National Institute on Aging, as part of its Resilience-Alzheimer’s Disease Consortium (Resilience-AD) program, and by the BrightFocus Foundation, which supports research into AD.

Once the AD-BXD panel was established, it was thoroughly characterized and validated at different age points. The research team found a high level of concordance between AD-BXD mice and both human FAD and LOAD at molecular and behavioral levels. Interestingly, the mice show overlap with human AD patients in terms of upregulated inflammatory pathways and downregulated neuronal signatures, indicating common molecular mechanisms between the two species.

“The ultimate goal of our AD research is to translate our findings into viable human therapeutics or biomarkers of disease,” says Kaczorowski. “The AD-BXD panel is an important step toward doing just that. It may provide the experimental platform we need to identify, for the first time, important genetic modifiers of AD susceptibility. These, in turn, can be targeted as new therapeutic opportunities.”

The paper underscores how important genetic diversity can be for AD research. Future studies using the panel will include identifying genomic regions involved with regulating cognitive decline and finding specific genes that contribute to resilience in particular mouse strains.

“Alzheimer’s is an extremely complex disease, and one contributor to clinical trial failures may be that we aren’t testing drug candidates on models that accurately reflect the disease,” says Diane Bovenkamp, Ph.D., Vice President of Scientific Affairs at BrightFocus Foundation. “Dr. Kaczorowski, and her colleagues are the first to produce mice that have genetic diversity similar to that present in the human population, which will enable her and other researchers to discover what is modifying the age of onset or increasing the risk of memory failure. BrightFocus is proud to be funding Dr. Kaczorowski’s innovative research, which has exciting potential for identifying future personalized, precision-medicine treatments.

Jeff Chuang has summarized the power of 3D cell models and mapped out the key milestones required for implementation of these powerful tools.