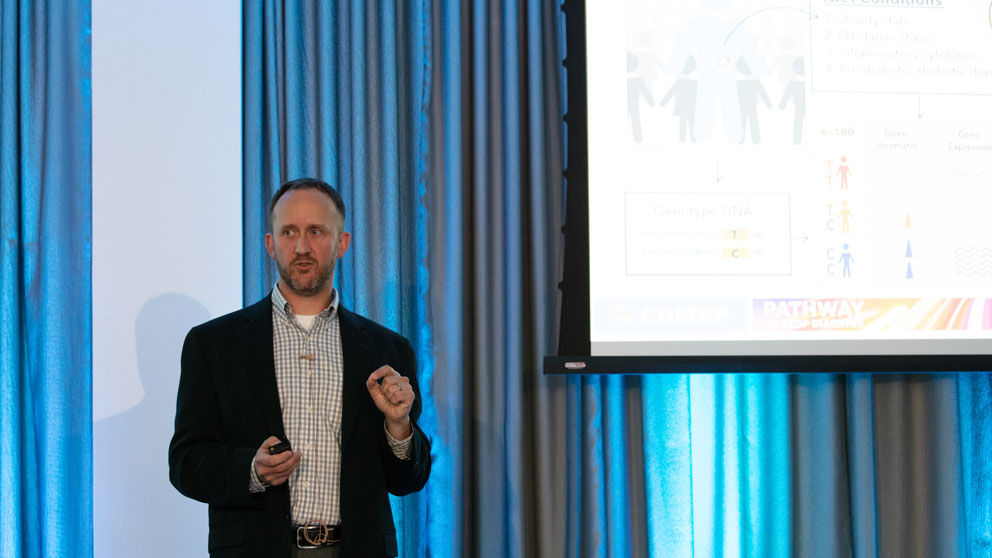 JAX Assistant Professor Michael L. Stitzel, Ph.D. is using cutting-edge technology – examining tissues as small as a fraction of the size of the head of a pin – to unlock how genetic and cellular changes in islets, the tiny clusters of cells scattered throughout the pancreas, can make us prone to type 2 diabetes.

The “monolithic” disease, said Stitzel during a TED-style talk at The Jackson Laboratory for Genomic Medicine in Farmington, CT, currently affects one in every seven people in the U.S, according to a recent CDC report .

And by 2050, it’s projected that one in three individuals in the U.S. will have type 1 or type 2 diabetes.

The disease is personal to Stitzel: his grandfather developed type 2 diabetes in his sixties, and when Stitzel was considering what to pursue for his post-doctoral research, he received a life-changing call. His father had also been diagnosed with type 2 diabetes. This diagnosis was the deciding factor for Michael, who has devoted the last decade to studying — at a cellular level — why people get type 2 diabetes.

The fact that the disease is fundamentally genetic is not lost on Stitzel, who has two young children. “It runs in families, it’s heritable,” he noted. “My grandfather has diabetes, my dad has diabetes. I’m clearly at increased risk for diabetes. And my children are, too.”

In type 2 diabetes, the pancreas can’t produce enough insulin, leading to dangerously high levels of glucose in the blood. Within the pancreas, cell clusters called islets of Langerhans, produce the insulin that ensures proper blood sugar handling for more than 30 trillion cells in our bodies. “Their function and resilience is key to diabetes,” said Stitzel.

Stitzel and his colleagues are focused on understanding two important complexities that contribute to the risk and progression of diabetes: genetic complexity, and cellular complexity.

“So the two things that we’re really interested in trying to disentangle is: 1) what are the genetic complexities that contribute to the risk and progression of diabetes, and 2) how is each distinct cell type affected within this community of islet cells?”

Using DNA sequencing technology, the Stitzel Lab has investigated the molecular switches that can turn certain genes or pathways on or off – therefore potentially putting us at risk for diabetes - in each of the cell types in the islet and assessed.

What did they find?

That there are about 150,000 switches that are controlling gene production in islet cells.

And that approximately 25-33% of these genetic differences appear to alter the ‘on/off’ status of these switches.

Perhaps most exciting to Stitzel, these studies have identified two potential new target genes that have never previously been implicated in diabetes or pancreatic islet function.

The second factor that the Stitzel Lab is examining, in addition to genetic complexity, is cellular complexity. For years, the focus in diabetes research has been on beta cells – the insulin-producing cells in the pancreas.

Stitzel is looking at all islet cell types in an effort to understand how those beyond the beta cells might be contributing to type 2 diabetes.

He and his colleagues are using microfluidics – a technology that allows them to capture and profile single cells at a time in order to understand the molecular makeup of each cell – to decode what else may be contributing to type 2 diabetes. “We do this thousands and thousands of times, and we can measure the molecular repertoire of each of those cells,” explained Stitzel. At this point, the Stitzel Lab has examined over 30,000 cells from 20 different individuals in this way.

“The islet is actually a community of cells,” he said. “What we’re really excited about is the fact that a combination of new technologies, namely deep sequencing and microfluidics, are now allowing us to unlock some of the code and secrets of these other cell types.”

So far, the scientists have found that a group of cells called delta cells are expressing genes encoding receptors that can sense and respond to cues from the brain, fat cells, and the gut. They’ve also been able to determine which islet cell types are using the genes and pathways that have been linked to genetic risk for diabetes, and to see how different groups of cells can alter each other. Stitzel likened the groups of cells to a neighborhood, in which neighbors both act on their own, but also influence each other. “It’s allowing us to start to ask how is it that diabetes alters cell populations, like the members of a community, and/or each member’s behavior.”

What Is Your Genetic Risk?

This incredibly complex work at the cellular level is just a piece of a larger targeted therapeutic approach.

“What we’re trying achieve is a transition from ‘average’ understanding and standard therapeutic approaches to something more precise and targeted, wherein we stratify patients in order to understand: what is your particular genetic risk? What genes and pathways are affected by your genetics, versus those that are affected by mine? And more to precisely understand which of the islet cell types are being affected by diabetes risk and progression.”

The Jackson Laboratory (www.jax.org) is an independent, nonprofit biomedical research institution with more than 2,200 employees. With a mammalian genetics institute as its headquarters campus in Bar Harbor, Maine, it has a genomic medicine institute in Farmington, Conn. and production facilities in Sacramento, Calif., and Ellsworth, Maine. Its mission is to discover precise genomic solutions for disease and empower the global biomedical community in the shared quest to improve human health.