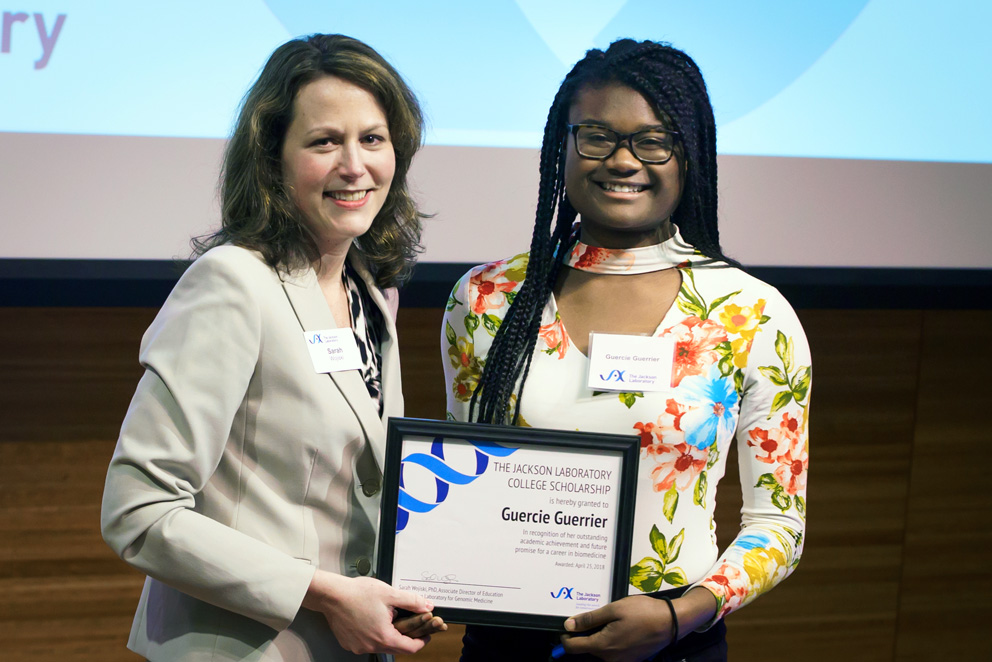 On April 25, 2018, The Jackson Laboratory for Genomic Medicine hosted its spring STEM open house event in Farmington for Connecticut high school students, their parents, and teachers. More than 100 people attended, coming from towns as far away as Kent, Ridgefield, and New Haven.

The event started with a poster session in the lobby, where current high school and undergraduate interns presented the research that they have been conducting at JAX Genomic Medicine over the course of this academic year. Attendees were then presented with a scientific program in the auditorium, which featured four JAX scientists who gave talks about their research and participated in a lively question and answer session. JAX scientists awarded door prizes for correct responses to trivia questions and for the student who authored the best science Haiku.

A highlight of the evening was the announcement of the inaugural recipient of the JAX College Scholarship in Connecticut. A $10,000 award is given annually to a graduating Connecticut high school senior who demonstrates high academic achievement, the motivation for a career in biomedical sciences, and significant financial need. The 2018 Connecticut JAX College Scholarship award was presented to Guercie Guerrier of Norwich. Guerrier attends Norwich Free Academy and will study neuroscience at Temple University in the fall.

A special thanks to our student interns and scientists who contributed to the great success of this event:

Geurcie “GG” Guerrier is a student at Norwich Free Academy (NFA) in Norwich who will attend Temple University in the fall.

Jason Croteau, a teacher at NFA who nominated Guerrier for the scholarship, says the senior truly epitomizes all of the qualities JAX was seeking for its first JAX Scholarship recipient.

“Guerrier is an outstanding student in all respects. She is hard working, smart, committed to learning and challenges herself daily,” Croteau says. “She takes challenging science classes and is a leader on campus and in her community.”

Guerrier is in the honors program and has been admitted into both the National Honors Society and the Science National Honors Society. She is a varsity lacrosse player, President of the NAACP Youth Council, and recipient of the Rotary Youth Leadership Award. Last summer, Guerrier was selected to participate in Loma Linda University’s Minority Introduction to Health Sciences program, which she refers to as “medical school boot camp.”

Guerrier plans to major in neuroscience at Temple. She aspires to conduct research on neurological disorders and ultimately obtain both a master’s degree in public health and a medical degree. Guerrier says she aspires “to help in the effort to provide adequate healthcare to all people, regardless of their race, financial standings, political views, or any other factors.”

Logan Schwartz, a student in the joint Tufts-JAX PhD program, has received an NIH service award.