Realizing the next generation of cancer care

The big news in cancer last year was clearly cancer immunology and immunotherapy. Researchers had gotten better at prompting the immune system to recognize tumor cells as foreign tissue — and taking the brakes off the immune response — so patients’ own cells could attack and kill the cancer. Patient trials had yielded some spectacular successes, and it was the dominant theme by any measure when researchers gathered for their annual meeting last April in New Orleans. So what about 2017? How has immunology evolved, and what else is on the horizon? The American Association of Cancer Researchers (AACR) meeting in Washington, D.C., had a record 21,000 attendees there to find out. 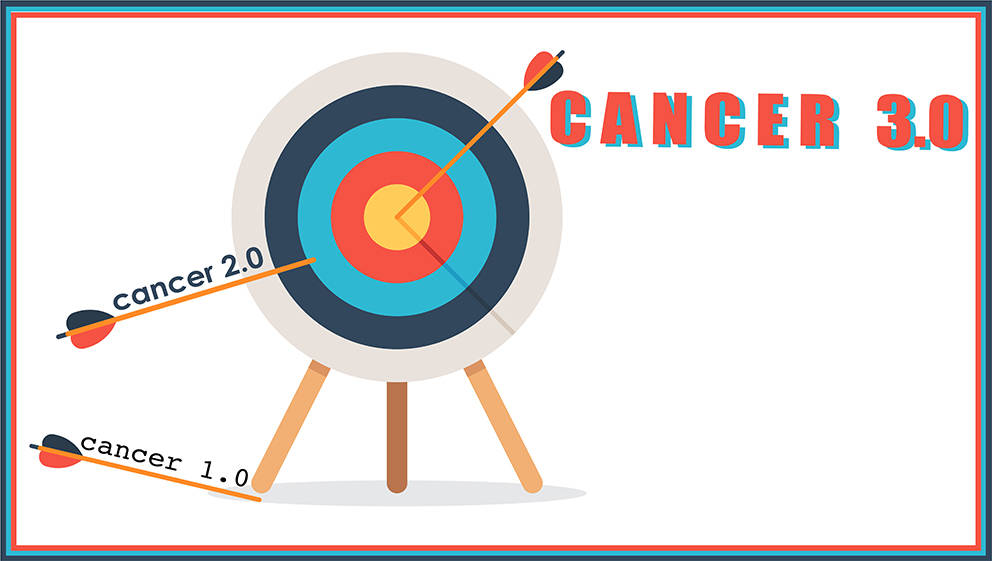 These are some of the hot topics and methods in cancer research now. What’s striking is that none of them were available or possible 10 years, some even five years, ago. The technology in the field has advanced with explosive rapidity, opening entirely new horizons for inquiry. We’re now able to assess important properties of cancer cells that were previously inaccessible, with striking implications for therapeutic potential.

Think of it as Cancer 3.0. The first generation of cancer care, Cancer 1.0 as it were, recognized it as rapid, uncontrolled cell division. Tumors could be removed surgically and patients administered radiation or chemicals toxic to fast-dividing cells. For most patients these actions were more holding patterns than cures, alas, and severe side effects and frequent recurrence undermined their overall effectiveness.

There is reason to be optimistic for Cancer 3.0 and beyond.

Cancer 2.0 might be known as the age of Gleevec, the nearly miraculous drug discovered 25 years ago that effectively treats chronic myeloid leukemia caused by the Philadelphia Chromosome by targeting the BCR-ABL fusion protein. This was the first truly targeted treatment, and it unleashed a wave of optimism for many more such compounds at the time. Progress has been more incremental than hoped, but it’s fair to say that we’ve seen progress to Cancer 2.0.1, Cancer 2.2.3, Cancer 2.4.2 and so on, as more cancers have been molecularly characterized and inhibitors discovered. Unfortunately, the complexity and adaptability of cancer cells have stymied most single-target therapies, as dramatic early results too often gave way to recurrence of tumors unresponsive to the original treatment.

Now within our grasp is the ability to manipulate the immune response to cancer cells, chart entire tumor cell lineages, analyze cancer cells one at a time, repetitively sequence cells from different parts of the tumor or even from the bloodstream, discover the full spectrum of mutations within these cells, and more. Granted, some of what these new capabilities are allowing us to learn is just how much there is to learn about cancer. It’s a terrifically complex disease, and indeed part of the new understanding is that it’s a vast number of diseases, with multiple sub-types present even within single tumors. The more we know, the more apparent it becomes that a simple cure or a wide-spectrum drug isn’t around the corner. In addition, the contributions of heretofore underappreciated cancer cell attributes — e.g., structural variants, the effects of non-coding DNA, epigenetic changes — have come under scrutiny in recent years, and some of their implications for progression and treatment remain hazy.

Yet there is reason to be optimistic for Cancer 3.0 and beyond. The pace of progress on the research front is truly inspiring, and while medical delivery of discoveries will lag behind — it always does because of the necessarily tortuous pre-clinical and clinical trial process — it will come. Major research hospitals like Mayo Clinic, Dana Farber, Johns Hopkins and more are already offering patients some extraordinary options, and those will enter oncological care on a wider basis in the years ahead. The science fiction sounding clinical trials happening now — some of which are seeing startling successes — will translate, as merited, to standard of care.

The details of the research can be daunting, so what are the signs that Cancer 3.0 is arriving in the clinic? Look for early detection screens that use blood draws and highly sensitive assays to catch cancer before it spreads. Look for cancer diagnostics that use tumor sequencing, healthy tissue sequencing, and multiple site sequencing to identify mutational signatures. Look for combination therapies that address both a tumor’s primary drivers as well as its predicted evolutionary resistance pathways up front, blocking both current and future growth. Look for immunotherapies that have higher efficacy rates and reduced side effects than the first generation that nonetheless caught the medical world’s attention last year. Look for better surgical techniques that go beyond current “hunt and cut” methods based on a surgeon’s vision to label and light up all tumor cells for more thorough eradication. And look for the most serious cancers of today, including pancreatic, brain, and ovarian, to become more treatable and manageable.

There are caveats. Don’t look for straightforward cures, which will remain elusive. And don’t look for all of this to be inexpensive — there are serious cost issues yet to be addressed. But it’s an exciting time in the history of cancer treatment. Cancer 3.0 will be of tremendous benefit to patients as we become able to find, characterize and subdue cancer in ways that embrace its complexities and use its own messy biology against it.