Aging puts us all at risk for Alzheimer's 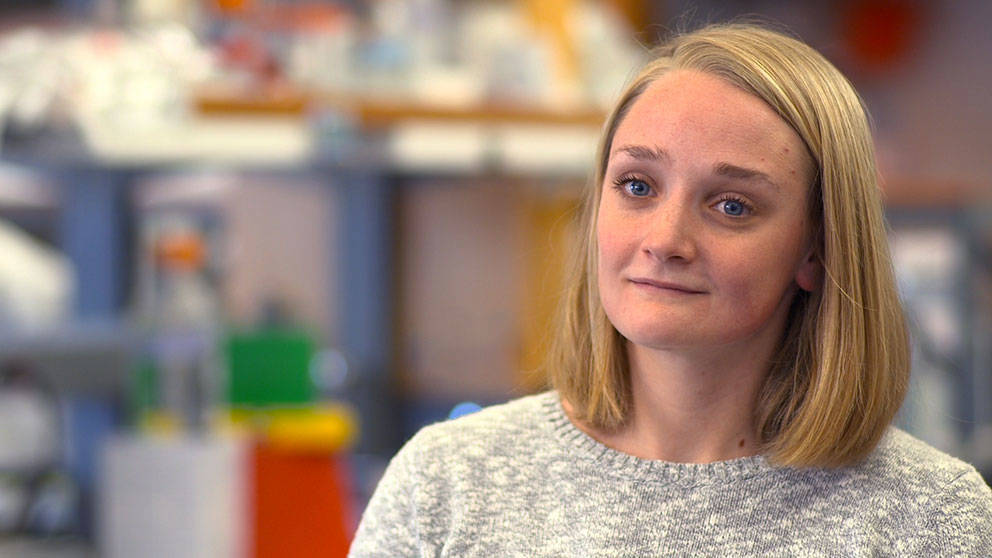 For many, Alzheimer’s disease is feared for the speed at which it destroys brain functions. Patients first experience a loss of short-term memory and the ability to recognize friends and family. Underlying the loss of these cognitive abilities is the deterioration and death of thousands of brain cells — neurons. Eventually, Alzheimer’s disease destroys so many neurons that vital brain functions — control of breathing and swallowing, for instance — fail.

More than 5.4 million Americans, one in nine people over the age of 65, are living with the disease. Most everyone knows, or will know, someone with Alzheimer’s disease.

Without a good mouse model for Alzheimer’s disease, the whole research community struggles.

“Patients know there’s no current cure for Alzheimer’s disease, but slowing it would have a huge impact,” says Leah Graham, a PhD student in Tufts University’s “JAX Track” program at The Jackson Laboratory in Bar Harbor, Maine. Graham’s research is focused on giving patients more good years to spend with their families.

“That would be amazing,” she says.

Graham works in the lab of Gareth Howell, Ph.D., studying aging and the diseases that come with it — like Alzheimer’s.“The number one risk factor for Alzheimer’s disease is age, not genetics,” Graham says.

The absence of a precise genetic signature means that there is no mutated function to target, as has been so successful for cancer therapeutics. And age, as a risk factor, is complex; many things happen to the body as we age. There are many associated risks for Alzheimer’s disease, and these may also worsen as we age.

“Obesity, cardiovascular disease, depression all correlate with an increased risk of Alzheimer’s disease,” says Graham. She’s working to disentangle these risk factors at the molecular level, testing, for instance, whether obesity contributes to neuronal damage because of improper diet, lack of exercise, or the increased inflammation that accompanies the disease.

Graham’s research, published in Scientific Reports, shows that when a mouse strain prone to develop Alzheimer’s disease is fed a western diet – a diet high in animal fats and proteins and simple carbohydrates, the rodent equivalent of burger, fries and sugary soda — the disease symptoms worsen. The mice fed the western diet experience excessive protein clumps, or plaques, in their brains, a hallmark of Alzheimer’s disease in human patients. Plaques are particularly numerous in brain regions vital for short-term memory. The western diet also increased the inflammatory response in the brain, so Graham can’t yet say whether the diet affects neuronal function directly or through inflammation, or both.

“Alzheimer’s has been difficult to understand because we don’t have accurate mouse models that recapitulate all aspects of the disease. For instance, feeding mice the western diet make them gain weight and increase the number of plaques, but we don’t see the extent of cognitive deficits that we would see in human patients,” Graham says. “Without a good mouse model for Alzheimer’s disease, the whole research community struggles. This leaves a huge challenge to identify and test therapies.”

“If we can change how some people think about their health,” said Graham says, “I think that’s really powerful. What matters is that people take action to make a change in their lives for the better based on scientific evidence.” 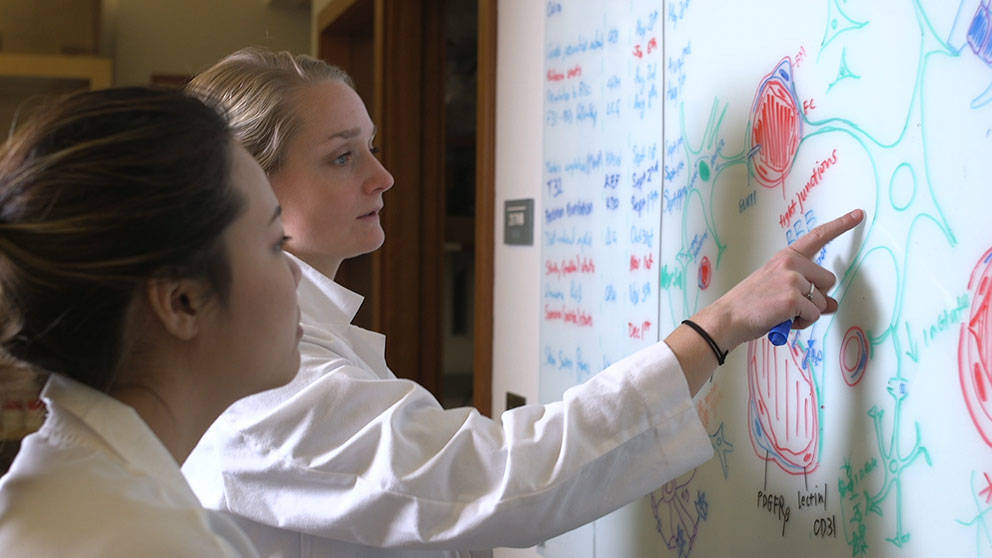 “People are not always informed about their own health,” she says. “For instance, some people don’t understand what dementia is. They might be ashamed of being forgetful rather than understanding that they have a disease.”

Prior to joining the Howell lab at JAX, Graham was an undergraduate at Ithaca College. When she started her Ph.D., she thought she would continue to study cancer, but after spending a couple of months testing out Alzheimer’s research in the Howell lab, she decided to make the switch.

“It was important to me to study something I thought was clinically relevant and where I could make a difference,” she says. “Gareth has that same drive. It just felt like a good fit.”

Graham and Howell are leading JAX’s research focus on Alzheimer’s disease. They are building an educational program for employees and the local community about the causes and symptoms of dementia. Graham applauds the efforts of local assisted living and eldercare providers, which offer social and educational programming, games, crafts, and exercise programs for the aging population.


Older people should involve themselves in activities within their community, Graham says. “Staying socially and physically active is a great way to minimize your own personal risk of developing age-related cognitive decline and dementia.”

While there are no guarantees, a healthy lifestyle gives your body a fighting chance against the changes of an aging brain.

Graham is now looking at how exercise protects the brains of older mice, hoping to better understand how a daily run might prevent inflammation and neuron deterioration. By identifying genes that respond to running, new therapies could be developed for people who are unable to exercise.

Graham continues to pursue the question of how diet and exercise might be used to stave off Alzheimer’s disease and age-related decline more generally. “I want to understand the precise mechanism by which environmental risk factors change our brain,” she said.  The initial hope is that by demonstrating which factors are beneficial, patients can adjust their lifestyles to minimize risk.

“The most important thing for me in my work is if I can teach people something that I hold important – the value of a healthy, balanced life.”