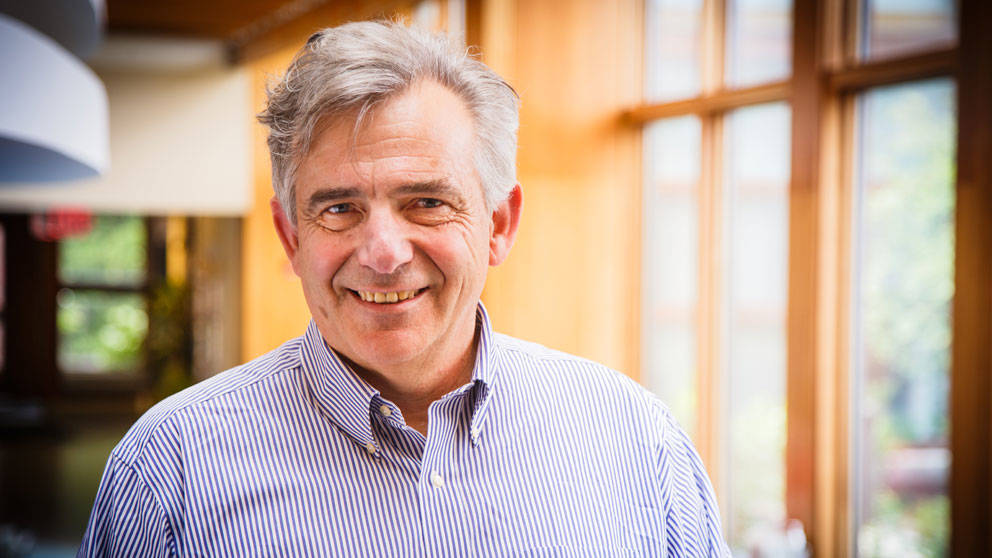 Martin F. Pera, Ph.D., a leading stem cell researcher with interests in neuroscience and regenerative medicine, has been appointed Professor at The Jackson Laboratory.

Pera comes to JAX from the University of Melbourne in Australia, where he is Chair of Stem Cell Sciences and head of Stem Cells Australia, a national initiative that links Australia’s leading experts in bioengineering, nanotechnology, stem cell biology, advanced molecular analysis and clinical research. He will begin work at the Laboratory’s campus in Bar Harbor, Maine, in January 2017.

Martin’s vision for genetic analysis of pluripotency ... could lead to major advances in our understanding and manipulation of stem cell behavior in health and disease.

“Martin Pera brings an unparalleled depth of expertise in embryonic and pluripotent stem cell biology to our faculty, complementing and broadening our emerging research emphasis on human genomic medicine,” said Edison Liu, M.D., president and CEO of The Jackson Laboratory.

Pera has devoted most of his career to studying the regulation of growth and differentiation of human pluripotent stem cells (hPSCs). These cells, found in human embryos or fetal tissue, have the unique ability to change into a variety of cell types – blood, heart, nerve, muscle, etc. — that form most of the body’s tissues and organs.

This pluripotency makes hPSCs a potential source of renewable, healthy, specialized cells for use in transplantation and the treatment of a wide variety of diseases and injuries such as heart disease, Parkinson’s and burns.

“We are thrilled to welcome Martin Pera to The Jackson Laboratory,” said Nadia Rosenthal, Ph.D., F.Med.Sci., professor and scientific director of mammalian genetics at JAX. “Martin’s vision for genetic analysis of pluripotency, afforded by our extensive mouse resources, could lead to major advances in our understanding and manipulation of stem cell behavior in health and disease.”

Pera’s laboratory has studied the extrinsic factors that drive hPSC self-renewal and survival, and those factors that initiate the early stages of lineage commitment – the process whereby cells exit the pluripotent state to become a specific cell type. His future studies will address fundamental questions relating to cell state transitions in pluripotent cells.

Pera is also interested in using hPSCs to develop disease models for neurodegeneration and epilepsy and to study the genetic basis for human variation in tissue repair and recovery in the central nervous system following stroke or brain injury.

“My clinical colleagues all have treated patients with very similar presentations and lesions following stroke or traumatic injury and repeatedly have witnessed highly variable outcomes between patients in terms of functional recovery,” Pera said. “Though such variation appears to be a universal finding, astonishingly, almost nothing is known of its biological basis.”

Recent studies of various mouse strains showing “striking differences” in the repair of axons — the long, slender projections in nerve cells that conduct electrical impulses — could be applied to human cells “to identify biomarkers of central nervous system repair potential and provide new targets for intervention,” he says.

Pera is also interested in the potential use of hPSCs for the discovery of antibodies – proteins used by the immune system to identify and combat pathogens such as bacteria and viruses.

“Human PSCs offer an experimental window into phases of the human life cycle that have been heretofore inaccessible,” Pera says. “A vast range of embryological and tissue progenitor or stem cells, along with differentiated cells, can now be isolated and studied in vitro.”

Pera expects to collaborate with JAX colleagues at both the Bar Harbor campus and the JAX Genomic Medicine campus in Farmington, Conn., as well as with scientists at the Mount Desert Island Biological Laboratory (MDIBL) in Bar Harbor. MDIBL, a nonprofit, independent, biomedical research institution, is a National Institutes of Health-designated Center of Biomedical Research Excellence (COBRE) in regenerative biology and aging.

“This is a great opportunity to combine the human cellular systems in vitro for functional genomics with whole organism biology in the mouse,” Pera said. “It’s potentially a very powerful combination and there are very few places in the world I think you could do it as well as at The Jackson Laboratory.”

Pera holds a Ph.D. in pharmacology from George Washington University and a master’s degree from Oxford University in England. He earned a bachelor’s degree in English and literature from the College of William and Mary before turning to a career in science, spent largely overseas. He completed postdoctoral research fellowships at the National Institutes of Health and at the Imperial Cancer Research Fund in London.