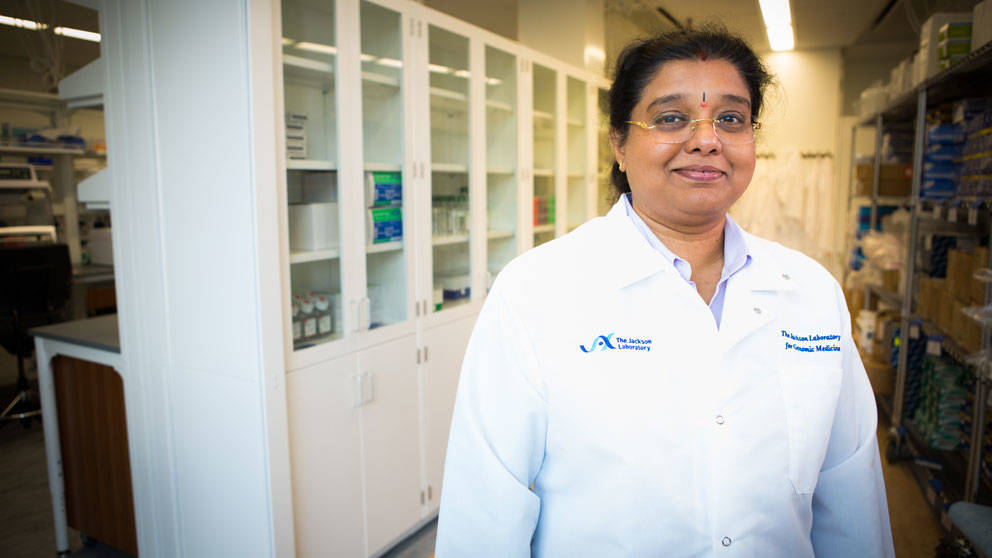 Q: What is clinical genomics? How is it different from genetic testing?

Clinical genomics at The Jackson Laboratory (JAX) goes above and beyond genetic testing. It is the application of genomics at any level, whether at the chromosome, gene or nucleotide level to answer questions related to human health and disease. At JAX when we talk about clinical genomics, we are looking for the “known” (known markers for disease), which is standard genetic testing, but we are also looking for the “unknown.” So we are doing a lot of discovery services to uncover novel genomic markers. Clinical genomics tests are performed in a regulated environment, meaning that the tests and their results are backed by federal and state governmental regulatory agencies, such as The Centers for Medicare and Medicaid Services and the Connecticut Department of Public Health. These regulators set the standard of care across the country, similar to board certification for physicians. Therefore, our findings that would otherwise be considered research (the “unknowns”) can be reported back to the patient and used in treatment and or management of disease, at the physician’s discretion.

Q: What clinical tests are offered at JAX? What tests are in development?

We have two clinical tests onboard at JAX. We have a constitutional microarray test, which detects chromosomal changes across the genome and can be used in pre- or post-natal testing. The microarray detects germline mutations (those that can be passed down from parents to children). We also have the JAX-CTPTM, which is used for cancer treatment profiling, for instance by looking at tumors that do not respond to or have developed resistance to chemotherapy. In addition, this panel can be used to identify treatments that are likely to be effective against that cancer, based on the genomic profile of the tumor. We are currently working on a microarray test for somatic mutations (those that do not pass down to progeny) to complement the next-generation sequencing panels we have, as well as another disease specific panel we hope to introduce shortly.

Q: Who can order clinical tests?

We see our tests having utility for three separate groups: Human genome researchers, pharmaceutical and biotechnology companies, and physicians, on behalf of the patient.

Q: What are JAX’s strengths in clinical genomics?

There are three main reasons JAX excels in clinical genomics. The first is the vast base of translational researchers present at JAX. The advantage to that is they are constantly identifying new molecules and new assays that can be added to the clinical lab, to eventually benefit the patients. The second is, as a non-profit organization, JAX is truly not motivated by money at the end of the day. This allows us the flexibility to design genomic tests that are driven by patient needs, not market needs. For instance we can develop tests for rare diseases with small patient populations, something a for-profit company could never justify. The third aspect is the ability to test “discovery” findings from patients in the laboratory. For example, if the JAX-CTPTM identified a variant of unknown significance in a tumor, researchers at JAX can then test that variant in a cell line, for instance, to determine if having that variant increases the cell’s resistance to chemotherapy. In this way, we are adding to the knowledge of significant variants in tumors.

Q: What are the biggest hurdles yet to overcome for JAX Clinical Genomics?

JAX needs to become better known in the clinical genomics space. JAX is recognized as a leader in mouse genetics and with the advent of the mouse avatars, JAX has begun getting the word out about their expertise in human genomics. The final step, really, is recognition for the clinical genomics that we are doing. Within that realm, we are actively working to get the word out about the quality of our tests, how comprehensive our tests are and the clinical utility of our tests.

Q:  Will you tell us about your career path and how you came to direct the Clinical Laboratory at JAX?

I did my Ph.D. in India in the molecular genetics of liver cancer, but I’ve always used JAX mouse models of human disease in my research. So when the opportunity to interview at JAX came up, I was eager to join the team! After my Ph.D., I came to the States for post-doctoral work at Evanston Northwestern Hospital (currently known as Northshore University HealthSystem), where I worked on a mouse model for multiple sclerosis, but missed working on cancer genetics. So I moved to the Mayo Clinic in 2005 to work on thyroid cancer and became assistant professor at Mayo, where our lab focused on finding biomarkers and developing mouse models of thyroid cancer. These findings propelled me to get clinical training in a Molecular Genetics fellowship, which I completed at Mayo, after which I moved to industry where I’ve held multiple positions, including Director of Marketing and Sales for Prevention Genetics, and Laboratory Director for multiple sites and VP of Clinical Operations at Transgenomic.