Battling cancer is difficult enough. Unfortunately, current treatments can make it even harder for female patients, who could be impacted for the rest of their lives by irreversible side effects. In particular, women who receive radiation therapy (especially combined with chemotherapy) near their reproductive organs are often left with shortened reproductive lifespans or complete infertility. They are thus unable to have children even after their cancer has been eliminated or has gone into remission.

Ewelina Bolcun-Filas, Ph.D., a principal investigator at The Jackson Laboratory since January 2015, is currently working with mice to explore how to protect female fertility despite radiation-induced DNA damage, so female cancer patients retain the option of having children later in life.

Bolcun-Filas’ introduction to reproductive biology was at Jagiellonian University in Krakow, Poland. She continued this line of work at Georg-August-Universitat in Gottingen, Germany, the Medical Research Council Institute in Edinburgh, Scotland and finally the Department of Biomedical Sciences at Cornell University before joining the team of reproductive biology researchers at The Jackson Laboratory.

“[Reproduction] is a fabulous system because it’s very complicated,” Bolcun-Filas says, adding, “And very important for the success of any species.”

Infertility as a side effect of radiation therapy is due to the mechanism by which radiation attacks cancerous cells. If a cell is exposed to radiation, it incurs DNA damage in the form of double-strand breaks, which means that both strands of the DNA double helix are severed. The goal of radiation treatment is essentially to damage the DNA of rapidly proliferating cancer cells to the extent that they die.

While this may be an effective way to rid the body of cancerous cells, radiation indiscriminately attacks all cells. Though the majority of normal cells are able to repair such breaks and recover, others succumb to the damage. These include not only the targeted cancerous cells, but also hair follicles (which causes patient hair loss) and, most importantly for Bolcun-Filas’ research, oocytes.

Oocytes are female germ cells that give rise to eggs during ovulation. They are located in the ovary and formed by the third trimester of gestation. As a result, by the time a female is born, she already possesses all of the oocytes she will ever have. And so if a female baby develops cancer during or after maturation and needs radiation therapy, she might lose the irreplaceable oocytes from irradiation’s consequential DNA damage.

“If the cancer is anywhere near the reproductive organs and they get radiation, there’s a very high chance the woman will become infertile,” Bolcun-Filas explains. After radiation causes double-strand breaks in the oocytes, the body–upon recognizing that they possess DNA damage–naturally eliminates them.

In addition to the woman’s inability to have children, secondary repercussions of oocyte death include the symptoms of menopause manifesting significantly earlier than usual. Premature hormonal imbalances–a consequence of no longer producing estrogen and other hormones during ovulation–can lead to a higher risk of osteoporosis and heart disease, as well as negatively impact a woman’s emotional health.

Currently, the best option for women about to undergo cancer treatments with a high likelihood of resultant infertility is to collect and freeze their eggs. And while they can still have children in this manner and take hormones after treatment, Bolcun-Filas believes there is a better way.

Both male and female germ cells (spermatozoa and oocytes) are extremely adept at handling double-strand breaks due to sensitive systems that ensure their repair. Compared to somatic cells, which posses efficient repair systems for a certain amount of breaks, germ cells have additional, superior mechanisms in place to detect and repair this particular type of DNA damage.

“Very few cells in the mammalian body can actually deal with the amount of DNA damage that germ cells do,” Bolcun-Filas says. “Germ cells are a very special cell type. They are the champions of DNA repair, for sure.”

This is because the integral reproductive process of meiosis–during which germ cells divide to produce sperm and eggs in males and females, respectively–requires extensive DNA repair. The beginning phases of meiosis induce approximately 300 double-strand breaks in a cell’s DNA. These breaks are ultimately repaired during genetic recombination, when broken pieces of chromosomes are reconnected, creating crossovers in DNA.

“The whole meiotic process in the mouse takes about five days to make breaks, repair breaks, and make crossovers, reshuffling chromosomes between the mother and father so offspring are genetically different from each parent,” Bolcun-Filas says. This is a natural part of reproduction that human germ cells also do very well. In other words, oocytes already know how to repair double-strand breaks, since they have to perform such repairs during meiosis. 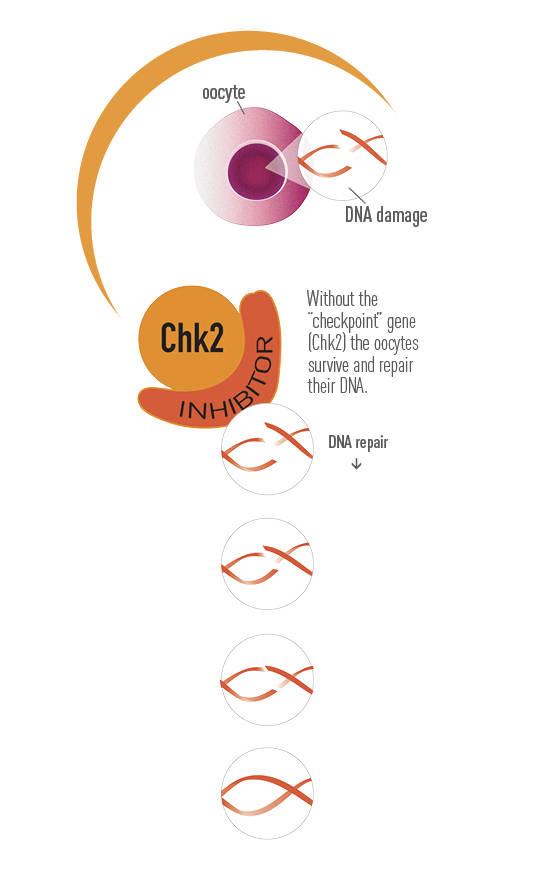 Therefore, if oocytes can mend DNA damage using the same mechanism in place for meiosis, what is stopping the oocytes of female cancer patients from repairing themselves and becoming viable eggs?

In her 2014 paper published in Science, Bolcun-Filas reported that checkpoint kinase 2 (“Chk2”) is what marks the oocytes that have failed to repair meiotic DNA damage for apoptosis (cell death). Although this quality control system is essential for producing genetically healthy eggs through meiosis, its continuous presence in oocytes that have already passed the quality check has undesired consequences for females undergoing radiation therapy. For example, normal mice treated with radiation lose their egg supply within a week–rendering them infertile–because the radiation-induced double-strand breaks activate the Chk2-checkpoint that results in oocyte death.

Using double mutant mice without Trip13 (a gene indirectly required for double-strand break repair during meiosis) and without Chk2 (the checkpoint protein that would typically eliminate oocytes with DNA damage), Dr. Bolcun-Filas has demonstrated that despite possessing double-strand breaks caused by the lack of Trip13, the oocytes–when not eliminated by Chk2–go on to repair themselves. The oocytes survive the radiation and the female mice remain fertile.

“Those oocytes from Trip13/Chk2 double mutants actually survive even though they shouldn’t. When we switched off the system [Chk2] that detects DNA damage and kills oocytes, they can survive. They actually can repair all those breaks later,” she says.

While Bolcun-Filas’ ability to save oocytes in mice despite induced double-strand breaks is a huge step forward in reproductive studies, it raises many questions about Chk2, fertility and reproduction. For example, radiation distributes double-strand breaks randomly; so while Bolcun-Filas can tell that the oocytes survived overall, it remains uncertain whether the damaged DNA was repaired properly. She plans to investigate whether these oocytes might have other mutations and thus the potential for more genetic problems.

Additionally, since oocytes with more DNA damage than usual are preserved in the absence of Chk2, oocytes with potentially harmful mutations could be ovulated. These might lead to eggs that are unable to be fertilized, or to failed pregnancies. Bolcun-Filas hopes to continue her research with mice to study which of the saved oocytes still successfully give rise to viable pups. Finally, another concern for Bolcun-Filas is whether potential mutations might be passed down from a mother to her descendants. She is averse to propagating mutations through a population due to uncertainty about the consequences.

“We see that we can prevent infertility in mice. But while we can say that for mice, for a human we are more careful,” she says, noting that there is much more research about Chk2 to be done.

Though it will be years before any drug can be developed from her findings, Bolcun-Filas is hopeful that her work will advance understanding of infertility. “For women with problems conceiving, or who are losing pregnancies, if we understand the genes that are behind making a perfect egg, we can then look at their genomes and genetic predispositions,” she says. “A mutation in the ‘checkpoint’ gene that allows bad oocytes to survive might give us an understanding of the quality of her oocytes and help us to predict the cause of infertility.”

Unfortunately, doctors will not be able to fix any genetic problems with oocytes, since oocytogenesis occurs before the female is born. However, with the knowledge that there is a good egg among the rest, they could recommend assisted technologies, such as in vitro fertilization, so that a “good egg” can be fertilized.

“Sometimes it’s quite difficult to work on fertility because it’s not thought of as a life-threatening disease,” Dr. Bolcun-Filas reflects, citing its lack of coverage in the media. “But the payback is really great. In the end, it has tremendous importance for the human species.”

Bolcun-Filas studies the genetics of fertility and ways to protect fertility in cancer patients: especially the molecular…