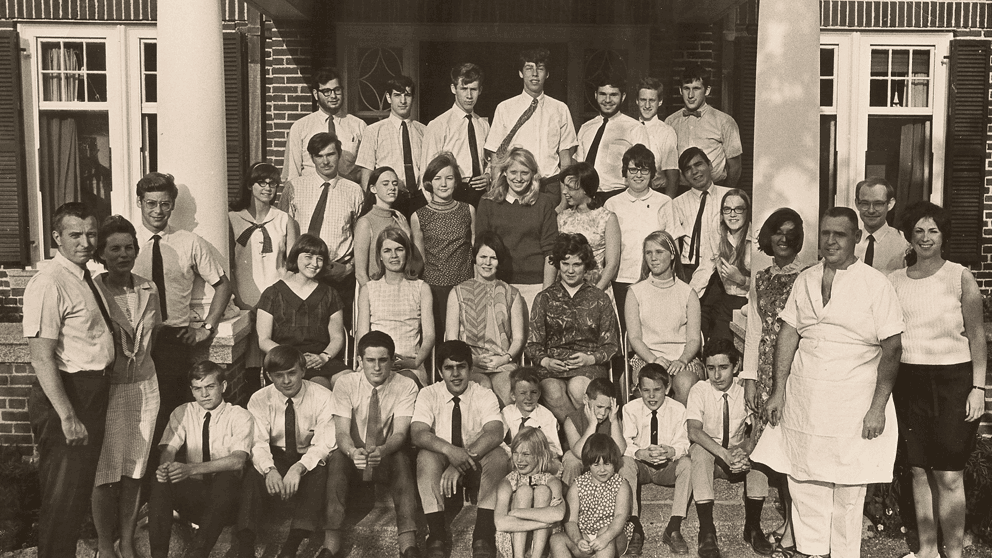 One ‘fabulous summer’ at JAX

Few academic science careers have taken as many capitalistic twists and turns as Corey Goodman’s.

It all started in 1967 when Goodman, then 16, enrolled in The Jackson Laboratory’s Summer Student Program. That experience, which he says “cemented in me the fact that I loved science and wanted to do it,” launched a prolific career in science and business that is still soaring today, nearly a half century later.

Throughout his career metamorphosis, from studying insect brain development at university labs to starting, running and financing biotech companies, Goodman says he is at heart the same 16-year-old boy who showed up at JAX in 1967, insatiably curious and enamored by science and math.

“It was a fabulous summer, a great time of growth,” he remembers. “It was really key in making me appreciate how much I enjoyed research. What a privilege for a high school kid to be able to go off and have an intense science experience.”

He fondly remembers playing softball games in Bar Harbor, climbing Mt. Katahdin and picking blueberries in Acadia National Park when not in the lab conducting experiments with his mentor, then-Laboratory Director Earl Green.

“I really liked Dr. Green a lot; he and I got along really well,” Goodman says. “I learned a lot of mouse genetics from him.”

Goodman was so absorbed in his research that he asked Green if he could continue the work at his high school in Skokie, Ill., where he was allowed to operate his “own little independent laboratory.” Green not only consented but shipped mice to Goodman at no charge.

After high school, Goodman enrolled at Stanford University on the advice of a JAX counselor. He studied biology there and was mentored by Donald Kennedy, a neuroscientist who later became commissioner of the U.S. Food and Drug Administration, president of Stanford and then editor-in-chief of Science.

Goodman went on to earn his Ph.D. at the University of California, Berkeley and complete a postdoctoral fellowship at UC, San Diego before setting off on his varied career adventures as a researcher, educator, entrepreneur, company CEO, corporate executive, financier and scientific advisor.

“Over these past 48 years, he has gone from an inexperienced high school junior full of dreams to one of the nation’s leading biomedical researchers, notable for his ability to carry cutting-edge research ideas through to commercial development,” observes Richard Primack, a fellow JAX classmate who went on to become a biology professor at Boston University.

Goodman spent the first 25 years of his career as a professor of neuroscience studying brain development in fruit flies as a model system for the human brain, first at Stanford and then at Berkeley.

By the 1990s he stood at the pinnacle of academic science as a Howard Hughes Medical Institute investigator, an elected member of the National Academy of Sciences, the author of more than 200 papers, the co-founder and director of Berkeley’s Helen Wills Neuroscience Institute, and the winner of several prestigious scientific awards.

But at the peak of his academic career, “I had this entrepreneurial bug in me,” he confesses. “I was starting to think more and more about the kinds of discoveries we were making in model genetic systems and their implications for human health.”

In 1995, Goodman and two fellow scientists – one from Berkeley and the other from Yale University – started a biotechnology company, Exelixis, to identify drug targets for human diseases based on their studies of fruit flies, nematodes, zebrafish and mice.

“Suddenly my eyes were opened up to a new world that I found fascinating   ̶   a world of finance, intellectual property, drug discovery, clinical trials   ̶   and I just loved it,” he says.

Exelixis went on to become a publicly traded company and today has a drug for thyroid cancer on the market and other cancer therapies in development.

Goodman’s success with Exelixis and his growing desire to translate lab discoveries into new drugs inspired him to want more commercial action. So in 2001 at age 50, and to many raised eyebrows in academe, Goodman gave up his tenured professorship at Berkeley to become the full-time president and CEO of Renovis, a neurology company he had co-founded a year earlier while still running his university research lab.

He steered Renovis through an initial public offering of stock in 2004 and a $152 million acquisition by a German firm, Evotec AG, in 2007.

That successful exit primed him for yet another commercial foray, this time as a corporate executive in “big pharma.” Pfizer, at the time the world’s largest pharmaceutical company, recruited Goodman to lead its advance into large-molecule drug development. He was appointed president and founder of the company’s Biotherapeutics and Bioinnovation Center and a member of the executive leadership team, reporting to the CEO.

Goodman is grateful for what he learned about sales, marketing, manufacturing, organization and executive leadership in his two years at Pfizer, but his entrepreneurial leanings proved stronger than his interest in large-scale corporate operations.

He left Pfizer and, on the very same day, incorporated another new biotech company, today known as Second Genome, dedicated to mining the human microbiome for new drug therapies.

He was back in his entrepreneurial sweet spot, the intersection of novel science and its commercial application.

In the six years since then, Goodman has founded or co-founded five more biotech companies – Ossianix, Labrys Biologics, Solstice Biologics, Heart Metabolics, and Alexo Therapeutics. And in 2011 he entered yet another new business realm, co-founding a life sciences venture capital firm, venBio Partners, with backing from pharmaceutical giants Amgen, Baxter International and PPD.

“I discovered I had a pretty good knack for understanding what was going to work and what wasn’t going work in humans, and where I felt biotech was going,” he explains.

Today, at 64, Goodman is board chair of six biotech companies and is seeking more promising young companies to finance with venBio’s second fund.

When not nurturing biotech companies and looking for new opportunities, he teaches part-time at Berkeley as an adjunct professor and is active in environmental affairs. He advises California’s governor and legislature on hot-button scientific issues such as fracking and water conservation. He is chair of the California Council on Science and Technology and a board member of the Pacific institute, a nonprofit environmental group.

Goodman has an office and a part-time residence in San Francisco but typically works from home at Barinaga Ranch, 823 acres of rolling pastureland overlooking Tomales Bay, about 50 miles north of the city.

On the ranch, he helps his wife of 30 years, Marcia Barinaga, a former biologist and writer for the journal Science, raise sheep and make artisanal sheep cheese in her family’s Basque tradition.  He relaxes by playing jazz and New Orleans blues on a 97-year-old grand piano and digital keyboards.

Goodman appreciates the fruits of his labors as well as the surprising journey that began one long-ago summer at JAX.

“It has been really fun to see the life sciences world from so many different perspectives,” Goodman says, “and I’ve loved every step along the way.”

The key to discovering a therapeutic for Alzheimer’s disease is identifying resilience, according to The…

In a paper published in the Proceedings of the National Academy of Sciences, researchers show that JAX Mighty Mice stayed relatively mighty during their time…

A Jackson Laboratory mission to study muscle and bone loss on the International Space Station also launches a STEM project for students here on Earth.