On Time, On Budget 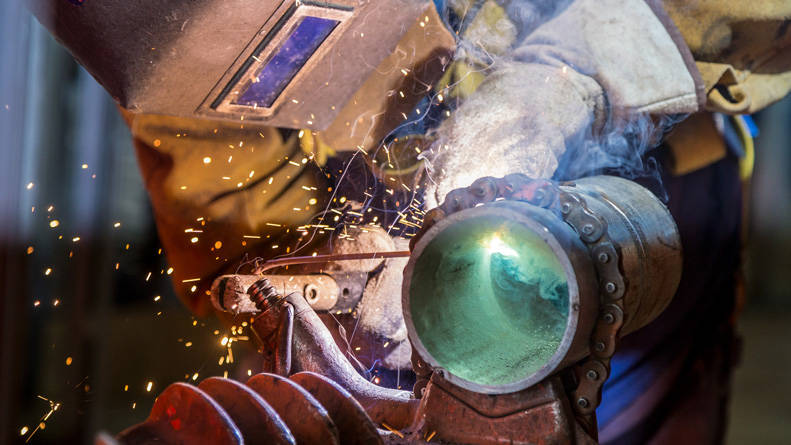 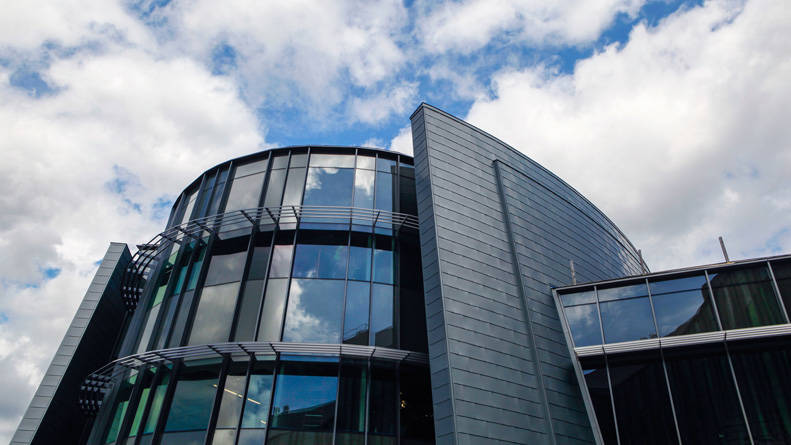 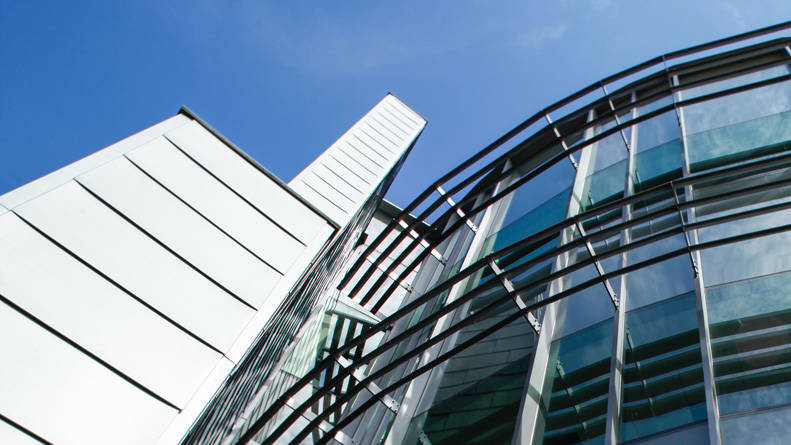 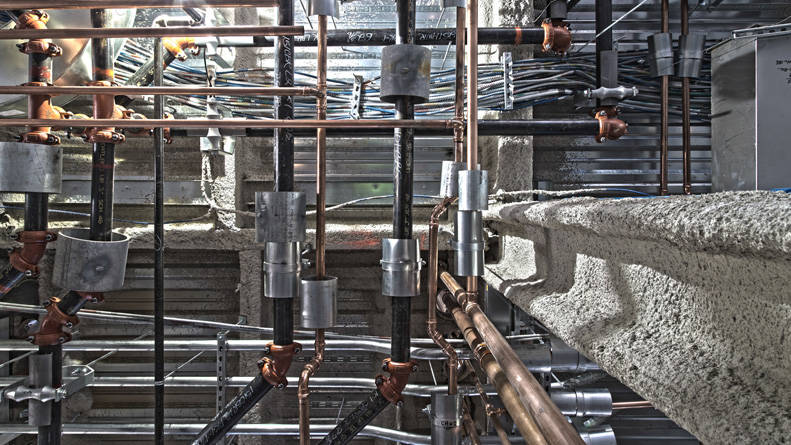 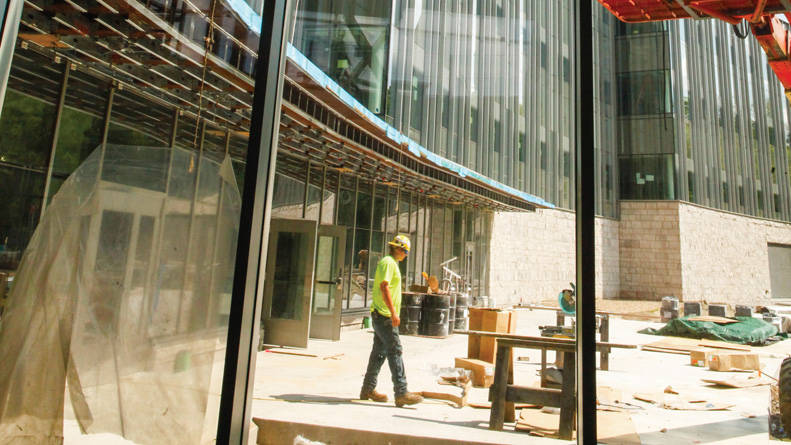 For the last 900 or so days, an electronic clock mounted on the wall of The Jackson Laboratory's engineering office in Bar Harbor has counted down the days, hours, minutes and seconds.

It's been a constant reminder of the most important deadline of John "Fitz" Fitzpatrick's 28-year engineering career: the day, Sept. 30, 2014, when JAX must finish construction of its new $135 million research center, The Jackson Laboratory for Genomic Medicine, in Farmington, Conn., and have its occupancy permit in hand.

As the clock nears zero, "we're going to be done on time, on budget—all the things we said we'd do when we signed our agreement with the state of Connecticut," says Fitzpatrick, the Laboratory's senior director of facilities services.

Rising on a 16-acre site on the University of Connecticut Health Center campus is a 183,500-square-foot building with state-of-the-art laboratories where JAX scientists will probe the human genome for new solutions to cancer, Alzheimer's, diabetes and other daunting diseases.

The design team, Centerbrook Architects & Planners and Tsoi/Kobus & Associates, was charged with creating a building sophisticated enough to entice internationally acclaimed scientists, bold enough to symbolize the state of Connecticut's new aspirations in the biosciences, yet practical enough for a no-frills, nonprofit organization serious about its research.

"The architects did a fantastic job," Fitzpatrick says. "The building aesthetics had to reflect our status as a leader in the biomedical research industry without the appearance of being opulent. And I think the team hit it. It's a high-end facility, but it's not a building that is filled with superfluous amenities."

Says Centerbrook architect Jim Childress: "Fitz was right. He said, 'Let's spend the money on science, not on making the architects look good.'"

Fitz was right. He said, 'Let's spend the money on science, not on making the architects look good.'

The four-story facility, faced with Canadian limestone and pre-weathered zinc panels and glass, is built in a graceful arc to fit the constraints of the site. A distinctive oval structure that Fitzpatrick calls "the snow globe" juts from one end, punctuating the main building like a comma. In time, as JAX Genomic Medicine grows, another wing will connect to it, forming a U-shaped campus.

JAX Genomic Medicine will include 17 "wet" biology labs and another 17 "dry" computational science labs, along with scientific service areas. The labs will be clustered in large, open suites to encourage collaboration among scientists and technicians, and to enable spaces to be reconfigured quickly and easily as research programs grow or shrink.

"That was the real soul-searching part," says Childress. "Science is changing so fast and so much."

At the building's entrance on Discovery Drive—a road named by JAX employees in a contest—visitors will walk into a light-filled, double-story vaulted reception area leading to a 200-seat auditorium, two large conference/seminar rooms, and a 200-seat dining area that opens into an outdoor courtyard. On the second floor will be core service labs, a data center, offices, conference rooms, an employee fitness center and an informal seating area referred to as the "pub" for casual networking and formal pre-conference gatherings. Research labs and faculty offices will predominate on the third and fourth floors.

"The architects' interior design takes a very clean and minimalistic approach," Fitzpatrick says. "There's a lot of glass in the building. In many work spaces, if not most, you can stand in the building and have access to daylight in at least two different directions and in some places three."

The design team took seriously the advice of JAX scientists who insisted that the building foster collaboration. "We started calling it the Collaboratorium," says architect Rick Kobus of Tsoi/Kobus. "We were really trying to get people sharing ideas, brainstorming, working together in novel ways to unlock the secrets of the genome.

"The concepts of making the building very transparent, of putting science on display, of creating a collaborative corridor between the private offices, were really an exciting set of challenges."

The building is on track to earn LEED Gold status, a certification by the nonprofit U.S. Green Building Council for structures that incorporate low-impact materials, environmentally sensitive operating principles, and energy-conservation practices. The LEED designation—an acronym for Leadership in Energy and Environmental Design—will mean, for example, that employees will have to forego energy-wasting personal printers or coffee makers in their offices.

Despite these small sacrifices, "I'm confident this building is going to be received very well after our employees move in and get acclimated to their new space," Fitzpatrick says.

The facility already has become a strong recruiting tool for attracting top faculty. "Scientists are finding that it's very responsive to their needs," Kobus says. "It's a novel, new environment. I don't think there's another scientific environment like it."

The building can accommodate up to 330 employees, starting with the 115 or so who will move in this fall after working in 21,000 square feet of temporary space scattered across the UConn Health Center and in leased offices off campus.

JAX Genomic Medicine will be formally dedicated on Oct. 7. The grand opening will cap 669 days of construction since ground was broken in December 2012.

"It was a pretty challenging schedule," Fitzpatrick says, especially during a time when, in addition to assisting with the programming and design of JAX Genomic Medicine, his seven-member engineering and technical services staff was also managing more than $20 million in construction projects at JAX's Sacramento, Calif., facility and another $15 million at the Bar Harbor campus.

"Nobody on the JAX team had ever designed or constructed a genomics facility before," he confesses. "That was a little challenging, but both our internal Facilities Engineering team and our external designers developed a very flexible and functional facility."

Initially Fitzpatrick devoted nearly all of his time to organizing the project, assembling the design and construction team, acquiring and renovating temporary space, achieving key design and early construction milestones, tracking budget projections, lining up vendors and coordinating with the UConn Health Center. "It was all-consuming," he says. This year his involvement has tapered off, thanks to the vendors JAX entrusted to oversee and build the facility: program manager Gilbane Inc. and construction manager Whiting-Turner Contracting Co.

"Whiting-Turner and Gilbane have been great to work with," he says. "And I can't say enough about how helpful my peers have been at UConn. If they were going to come on our campus and build here, I would hope that I would be half as gracious as they have been to us."

The JAX project began at an inauspicious time when more than $600 million in construction projects funded by the state's ambitious Bioscience Connecticut initiative were about to begin within a half-mile radius on the UConn Health Center campus. The impending building boom threatened to raise construction prices and thin the ranks of qualified contractors, so Fitzpatrick and his team acted quickly.

"We got the entire team together, we put a line in the sand and said we are going to be the first project out to bid . . . . And we were the first ones on the street. I'm confident the project outcome benefitted immensely from that."

The team had only 31 months to take the project from an idea to a design to a finished building. A freakish 44-inch snowstorm in 2013 delayed construction for several days, and a long, cold winter this year further slowed productivity.

"Every project has its challenges, and this one has had its own unique issues to overcome, but it's the nature of the beast," Fitzpatrick says with a shrug. "You try to anticipate and minimize adverse impacts. You roll with the changes.

"This has been a schedule-driven project. I'm pretty happy that despite a few hiccups we've stayed on schedule from day one."

JAX Genomic Medicine by the numbers