Mounting evidence indicates that cerebrovascular abnormalities are significantly involved in the development of Alzheimer’s disease (AD). A majority of dementia patients display both AD and cerebrovascular pathologies, including altered cerebral blood flow and microinfarcts, demonstrating a critical link between vascular risk factors and AD pathology. Recent evidence points to fibrinogen as the link between the neurological and vascular defects in AD patients. Fibrinogen is the primary protein component of blood clots, but is normally prevented from entering the brain through the blood-brain barrier. However in AD patients, fibrinogen is found in brain blood vessels and parenchyma. Additionally, β-amyloid (Aβ), the main component of amyloid plaques, binds to fibrinogen and alters fibrin clot structure, making them resistant to degradation. Therefore, molecules that can block Aβ-fibrinogen interaction without affecting normal thrombosis, or blood clots, are strong targets for AD therapeutics. A new report in J. Exp. Med. (Ahn et al. 2014) identifies a novel inhibitor of Aβ-fibrinogen interaction that dramatically improved both vascular defects and cognitive impairment in a mouse model of AD.

High-throughput screening of >93,000 small molecules identified 10 candidate compounds that inhibit Aβ-fibrinogen interactions. A focused analogue library of >2,000 compounds derived from these primary drug candidates further identified five compounds with improved Aβ-fibrinogen inhibitory activity. One of these five molecules, RU-505, displayed the greatest inhibitory efficacy. Aβ molecules can aggregate to form oligomers, which are believed to be the principal agent of nerve cell death in AD. Aβ42 monomers and oligomers both interact with fibrinogen, but the Aβ42 oligomers have a ~4 fold greater affinity than the monomers. RU-505 inhibits interaction between fibrinogen and both Aβ42 monomers and oligomers in vitro, but the inhibition efficacy is greater against Aβ42 monomer-fibrinogen interactions. Additionally, RU-505 significantly reduced Aβ42-induced changes in fibrin clot formation and clot degradation in vitro, without affecting fibrin clot formation and degradation in the absence of Aβ42. Therefore, RU-505 inhibits only the interaction between fibrinogen and Aβ without altering basal thrombosis. 5XFAD mice treated for 4 months with RU-505 displayed a significant (~37%) reduction in occluded vessels following FeCl3-induced cerebral thrombosis as compared to vehicle treated mice. RU-505 administration did not affect basal vessel occlusion in wild type (WT) littermates.

In addition to ameliorating the abnormal thrombosis in the 5XFAD mice, long-term RU-505 administration significantly:

- Reduced infiltrated fibrinogen and microgliosis in the cortex

These exciting results strongly demonstrate that targeting the interaction between Aβ and fibrinogen is an effective method for improving the cerebrovascular and cognitive defects in an AD mouse model, and offers a novel target for new AD therapeutics. 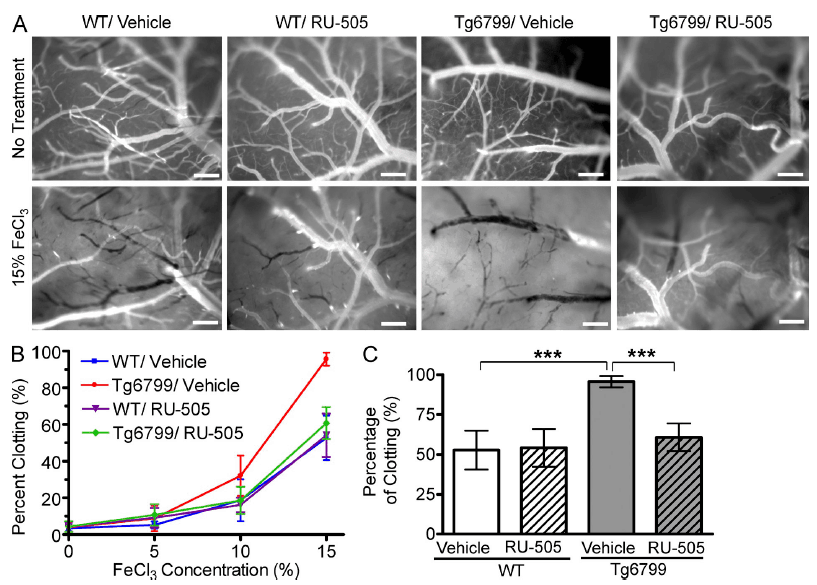