Malaria is a notorious deadly infectious disease affecting millions of people in tropical and sub-tropical regions in the world. A very import new advance toward the development of malaria therapy has been reported in Malaria Journal (Wijayalath et al., 2014). The authors transplanted human cord blood hematopoietic stem cells (HSC) into immunodeficient mice expressing HLA class II. In addition to establishing human immunity in the mice, the mice also developed human hepatocytes, endothelial cells, Kupffer cells, reticulocytes and erythrocytes. These human cell populations are all necessary to complete the life cycle of Plasmodium falciparum, the most virulent species causing malaria. Mice with malaria parasites in the blood enabled transmission of the parasite to mosquitos and produced an immune response that cleared the organism with 45 days.

Other key human cell populations important in the parasitic life cycle are hepatocytes, endothelial cells and Kupffer cells. Kupffer cells are derived from the myeloid lineage of bone marrow and turn over following myeloablation. In the transplanted mice, human CD45+ CD68+ Kupffer cells constituted ~11% of the isolated liver mononuclear cells. Hepatocytes and endothelial cells are not derived from bone marrow, yet multiple publications have reported their presence following HSC transplantation. Evidence for human hepatocytes in chimeric mice came from:

Human endothelial cells were also detectable in the chimeric mice by labeling liver sections with anti-human CD36. CD36+ cells were observed in liver veins and sinusoids. 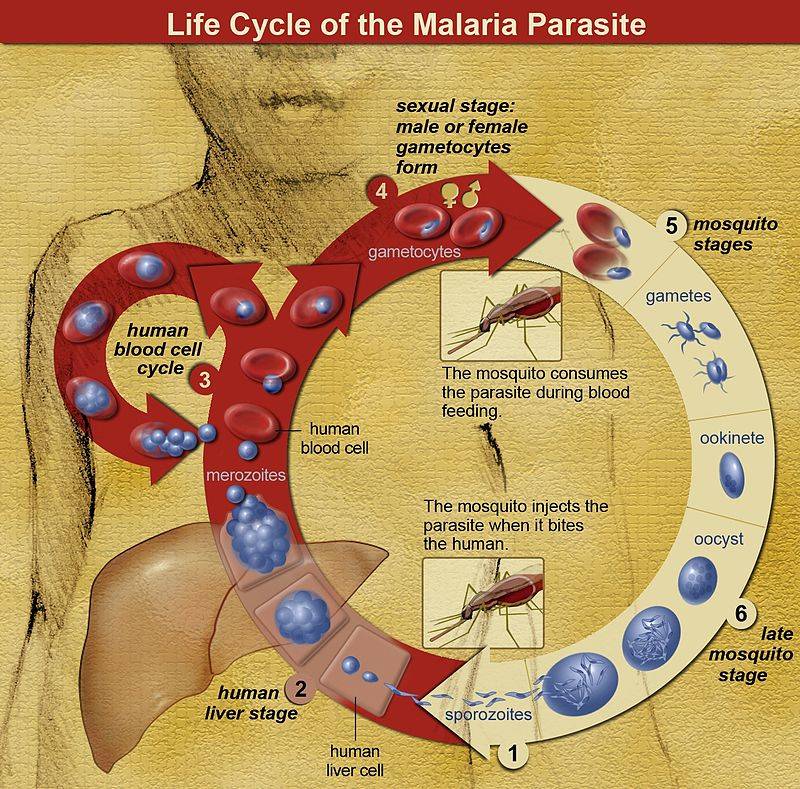 The life cycle of malaria parasites. A mosquito causes an infection by a bite. First, sporozoites enter the bloodstream, then migrate to the liver. They infect liver cells, where they multiply into merozoites, rupture the liver cells and return to the bloodstream. Then, the merozoites infect red blood cells, where they develop into ring forms, trophozoites and schizonts that in turn produce further merozoites. Sexual forms are also produced, which, if taken up by a mosquito, will infect the insect and continue the life cycle. (image credit NIAID)

Humanized DRAG mice were IV injected with P. falciparum sporozoites, and livers were interrogated for schizonts 5 days later. Histochemical staining of liver sections detected PfHSP70+ schizonts. Also, PCR for parasite-specific 18s rRNA in blood of the mice demonstrated ongoing parasitaemia. All infected mice (n=49) were positive for liver infection and blood parasitaemia. Blood stage progression of the parasite was confirmed by detection of P. falciparum rings and trophozoites in smears of Geimsa-stained peripheral blood. In addition, when parasite-infected blood was co-cultured with RBCs, the authors detected expansion of rings, trophozoites, schizonts and gametocytes. These results provide evidence that the humanized DRAG mice recapitulate all of the human in vivo portions of the parasitic life cycle.

Completion of the parasite life cycle requires the mosquito. An. Stephensi mosquitos were allowed to feed on the gametocyte-containing blood in vitro, and in a separate experiment, allowed to feed directly on infected mice. Both feeding methods led to oocyst and salivary gland infectivity in the mosquitos as well as detection of oocytes in the midgut.

Altogether, these results clearly demonstrate a complete life cycle for the parasite using the mosquito and a small-animal model useful in the laboratory setting.

In order for the humanized mouse platform to be useful for therapeutic development, it must be capable of parasite-specific immune responses. Interestingly, infected mice were capable of clearing the parasite within 45 days. Splenocytes from infected DRAG mice were stimulated in vitro with extracts from parasite-infected RBCs. Flow cytometry was used to detect T cell activation. Stimulated human CD4+ and CD8+ T cells made TNFα, but not INFγ. A humoral response is a key component to immune clearance of the parasite because RBCs do not express antigen required for T cell-mediated removal. Infected mouse blood was therefore interrogated for parasite-specific antibody production. Mice produced IgM and IgG antibodies specific to ring-, trophozoite- and schizont-stage RBCs in 14 of 18 mice.

Prior mouse platforms for P. falciparum infection only allowed study of either the liver or RBC component of the parasitic life cycle. The work presented by Wijayalath, et. al., demonstrates, for the first time, a mouse model that enables all components of the life cycle. Additionally, this new model supports human immune functions that will allow a greater understanding of the immunobiology of malaria, which in turn may allow for the development of new treatment strategies.