Bearing down on kidney disease 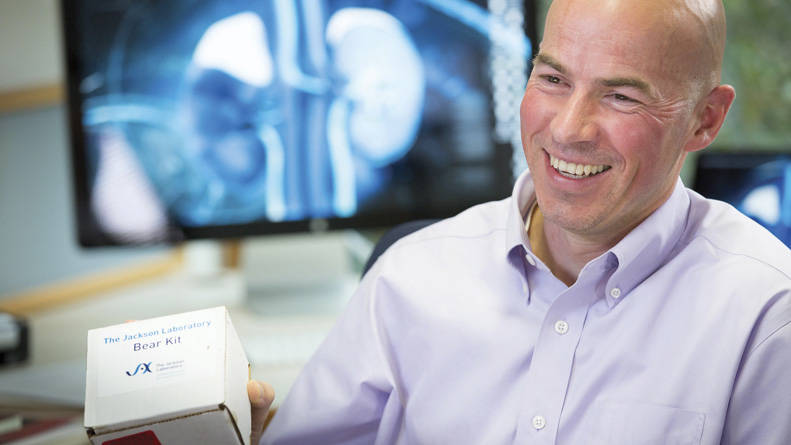 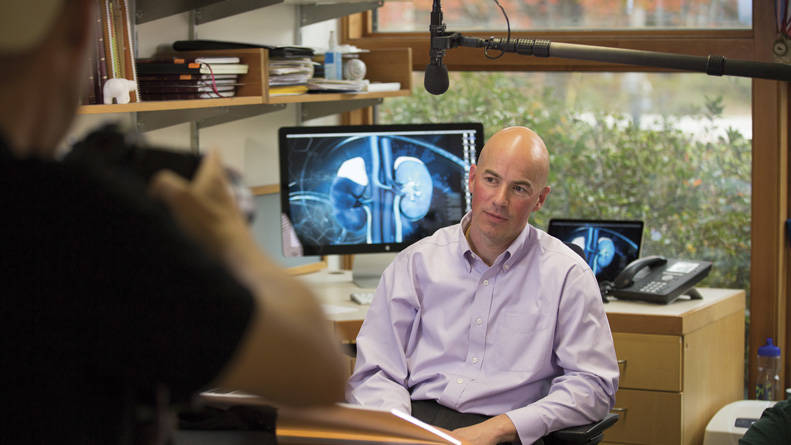 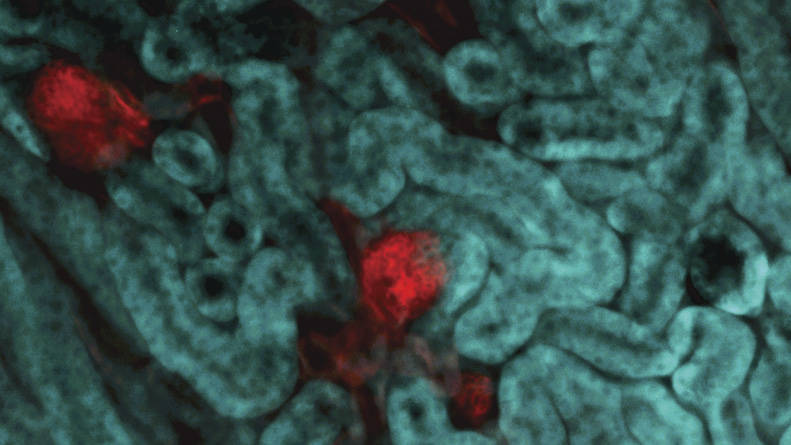 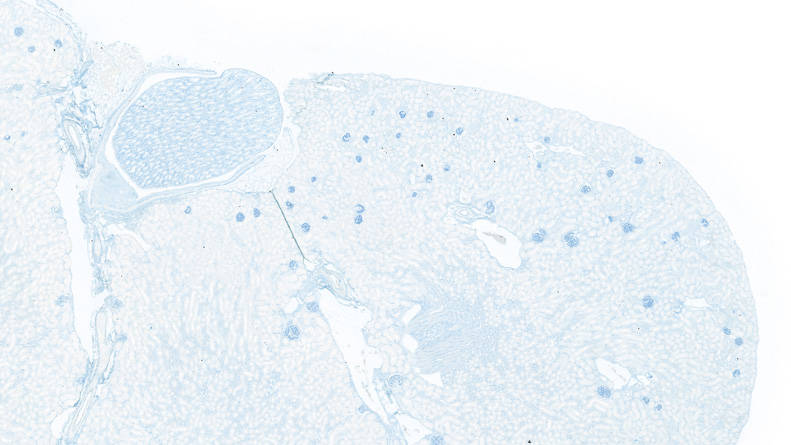 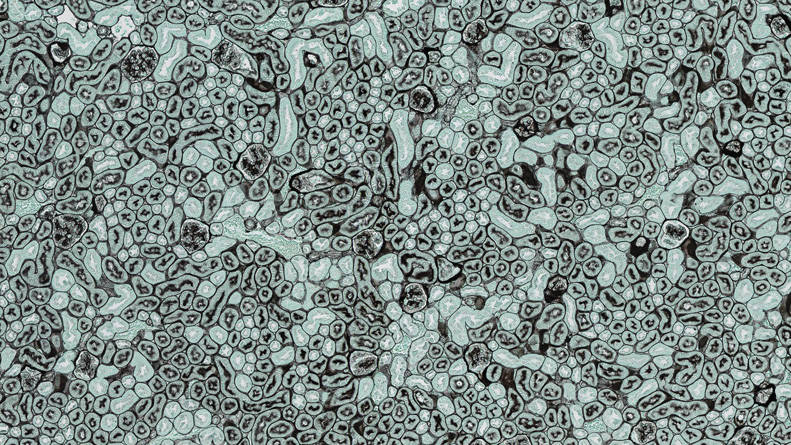 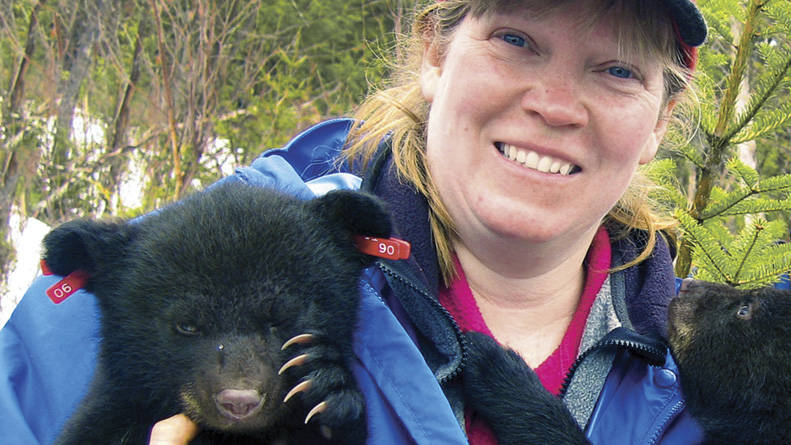 Fun fact: A black bear’s kidney is about the same size as a human’s, even though the average black bear is about twice the size of the average human. But that’s where the similarities end.

The kidney of the American black bear (Ursus americanus) is a conglomeration of marble-size spheres, unlike the smooth, uniform-looking human kidney. And the bear kidney has a neat trick that the human version can’t match.

We can learn a lot from other species and how they deal with challenges to kidneys.

“Black bears go into hibernation in the fall with healthy kidneys,” explains Jackson Laboratory Assistant Professor Ron Korstanje, Ph.D., contemplating a bear kidney floating in a glass jar on his desk in Bar Harbor, Maine. “They don’t urinate during hibernation, and by the time spring arrives, their kidneys are damaged and have lost most of their function.”

Yet, intriguingly, the bears’ kidneys appear to regenerate themselves, returning to normal function during the spring and summer. “How does that happen?” Korstanje asks. “And if we figure that out, can we come up with treatments that can prevent or reverse kidney damage?”

The Korstanje lab focuses on the genetics of age-related kidney disease; kidney function naturally deteriorates with age. Combine the aging of the huge Baby Boom population cohort and the steep increase in people with type 2 diabetes, and the nation faces a rapid and costly increase in people with kidney disease and impaired renal function. More than half a million Americans have chronic kidney disease, costing society more than $42 billion a year, almost a quarter of the Medicare budget.

When patients lose more than 85 percent of kidney function, they must undergo dialysis treatments to remove waste and excess water, maintain proper levels of chemicals including potassium and sodium, and control blood pressure. The most common treatment is hemodialysis, in which a patient’s bloodstream is connected to a filtering machine by a catheter or fistula. It’s a time-consuming and often uncomfortable process.

“Patients in the early stage of kidney disease, when treatment would be most effective, typically don’t have any symptoms,” Korstanje notes. “And by the time disease symptoms appear, irreversible damage to the kidneys has likely already occurred. So, finding a way to diagnose patients before this damage occurs would significantly improve treatment options.”

The Dutch-born Korstanje came to JAX as a postdoctoral associate in 2001 in the laboratory of Professor Beverly Paigen, Ph.D. Korstanje’s work earned him the notice of colleagues at the University of Groningen in the Netherlands, and he was recruited “back home” in 2004, as a research associate in the medical biology

division to study nephrology. Within two years, Korstanje advanced to the rank of assistant professor. But he returned to JAX in 2007 as a research scientist in Paigen’s laboratory, and was promoted to assistant professor in 2013.

If Korstanje looks healthy and athletic, that’s because he is. He’s a familiar figure running on the carriage roads of Acadia National Park, and his office is papered with race numbers from the many marathons and “Tough Mudder” events he has run.

Korstanje’s lab has investigated the genes that are associated with kidney disease in mice, with the aim of determining genetic variations that might make people more susceptible to kidney disease. To date his lab has identified more than 100 relevant genes in the mouse. Determining the function of each of those genes would take many years of research, but a shortcut solution was just eight miles from the Laboratory along Route 3, past the town of Bar Harbor and along the rocky, scenic coast of Mount Desert Island.

At the Mount Desert Island Biological Laboratory (MDIBL), Hermann Haller, M.D., and Mario Schiffer, M.D., visiting faculty from Hannover Medical School in Germany, study zebrafish to identify genes that could be involved in kidney disease. They are focusing on four of the genes Korstanje identified in mice, those that appear to have the strongest influence on kidney disease susceptibility.

Zebrafish (Danio rerio), freshwater fish that are related to minnows, are small and pretty, with sporty blue and gold racing stripes along their sides and fins. But the MDIBL fish are especially dazzling: the researchers have introduced fluorescent proteins into zebrafish larvae, and under ultraviolet light the larvae emit a bright green glow. The technique enables researchers to easily examine the zebrafish’s two nephrons, the basic filtering structures that are also found in the kidneys of mammals (including mice, humans and black bears).

“By utilizing this combined mouse-zebrafish approach, what would have taken several years and cost millions of dollars in the mouse alone was accomplished in less than a year and for less than $10,000 using zebrafish,” says MDIBL Director Kevin Strange, Ph.D.

The JAX and MDIBL researchers have joined forces with clinicians at the Maine Medical Center in Scarborough to build a statewide research collaboration known as ReMAINE.

“Now we can begin to look for these genes in the patient population,” Strange says, “and determine which ones are indicators of early kidney disease. If we’re successful, not only will there be the potential for improved quality of life, but also for a significant reduction in the health care costs associated with treating patients with chronic kidney disease.”

Back at The Jackson Laboratory, Korstanje has received a special delivery: a beat-up cardboard box marked “Bear Kit.” “We developed a small collection kit—containing a vial of fixative, a vial of buffer, forceps, an instruction sheet and a data sheet—and had them distributed to spring bear hunters,” he says. “We expected to get maybe a dozen kits back, and we’ve received about 40 samples, which also include some basic information from the hunters about the bears such as gender and approximate weight and age.”

Gary Striker, Ph.D., a professor of nephrology at Mount Sinai Hospital in New York City and an expert renal pathologist, examines and scores the samples. “This will allow us to establish a rough timeline for kidney recovery and some estimation on the impact of age and sex,” Korstanje says. “Once we have determined the window of when the kidney is recovering, we can move to the next stage.”

That next stage, he notes, is “more complicated.” For this the JAX researchers collaborate with Rita Seger, M.D., Ph.D., of the University of Maine (UMaine’s mascot: the black bear), who studies bone and kidney metabolism of hibernating bears. Plans are for Seger’s team to sedate and collar five male bears and track them via GPS. Several times in the following months the researchers will sedate each of the bears again and collect kidney tissue samples to trace the seasonal changes in their kidney function.

Korstanje’s lab will also sequence the samples to see which genes are expressed at various points in time. “Unfortunately there is no complete genome sequence of the black bear, which would help us understand where the sample sequences fit, so we’re working on building a genome from available data.”

He says that if his lab can identify black bear genes that have higher expression during the kidney-regeneration process, they can go back to their mouse models, look at what happens to these genes after kidney damage, “and see if we can alter this process when we make the expression of these genes more 'bear-like,'” with the ultimate goal of identifying potential drug targets for human kidney patients.

Black bears’ kidneys may be unique as far as land animals go, but it turns out that the kidneys of marine mammals—seals, porpoises and whales—are very similar in structure, Korstanje says. Living in the ocean, “they obviously take in a great deal of salt, which would be very damaging to a human kidney, and in fact increased human consumption of salt by humans contributes to hypertension and kidney damage. How do these animals deal with such high salt concentrations?”

If we understand which genes are involved in the process of kidney damage and renal function decline, we might be able to slow down this process and postpone the need for dialysis, or even better, prevent it altogether

At the College of the Atlantic in Bar Harbor, Allied Whale Marine Mammal Stranding Coordinator Rosemary Seaton and students collect any marine mammals that wash up on the shores of Frenchman Bay and conduct necropsies on them. Korstanje’s research lab manager, Sue Sheehan, collects kidney tissue samples from the Allied Whale team for study.

Besides mice, zebrafish, bears and marine mammals, Korstanje’s lab can now collect vital data about kidney function and disease from clinical collaborators who care for human patients with chronic kidney disease. “We can test the candidate genes we find that appear to be associated with kidney disease,” Korstanje says, “and then we can make and study mouse models with the same genetic profiles as the patients’.”

Earlier this year Korstanje and his lab published a paper on the genetics of a human disease known as Alport syndrome. Patients with the disease, which is caused by a mutation in a single gene, die relatively young of kidney failure, but the age of onset and severity of the disease vary widely. In a mouse model of Alport syndrome, the team showed that other genes influence the amount of kidney damage, and the lab is now mapping these “modifier” genes.

Korstanje’s lab tested the effects of adding lithium to the diet of mice from 30 different strains (leaving half the mice from each strain untreated). Some of the treated mice produced much more urine than normal—as much as their own body weight in a day. The lab is now screening for candidate genes for this diabetes insipidus-like condition.

“We can learn a lot from other species and how they deal with challenges to kidneys,” Korstanje says. “If we understand which genes are involved in the process of kidney damage and renal function decline, we might be able to slow down this process and postpone the need for dialysis, or even better, prevent it altogether.”