Of medicine, mice and miracles 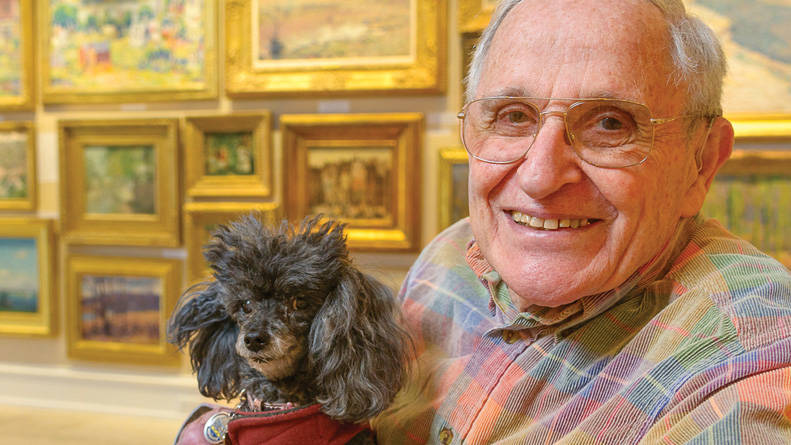 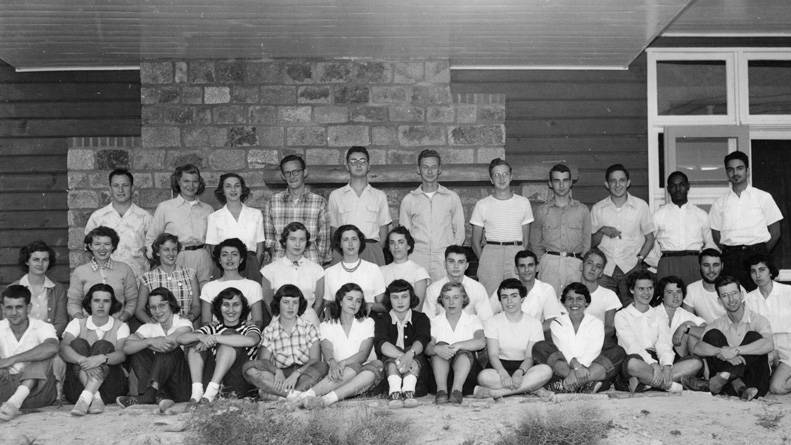 Silvers first came to JAX in 1949 as a summer intern looking to improve his transcript for med school. He poses with his fellow students (back row, third from right) in front of the old Lodge, an iconic Laboratory building that served many functions over the years. 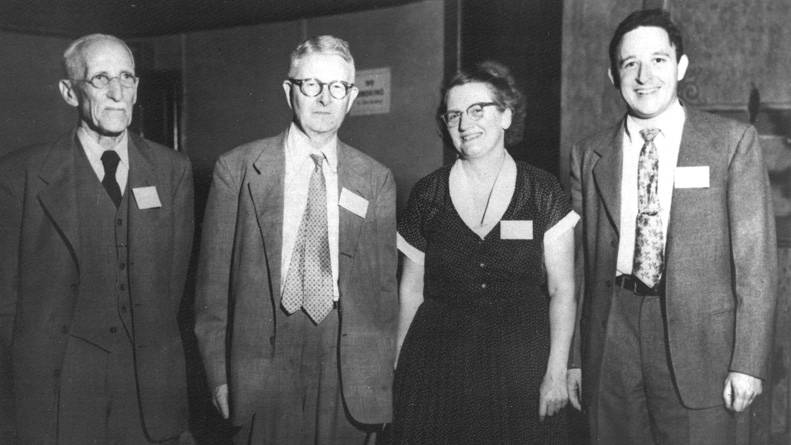 The history of mammalian genetics through the 1950s is captured in this extraordinary photograph of four generations of scientists. William Castle, far left, pioneered the field of mammalian genetics, beginning his research soon after the rediscovery of Mendel's laws of inheritance in 1900. Among his students were JAX founder C.C. Little and Sewall Wright, second from left, who is one of three scientists credited with developing a mathematical basis for modern evolutionary theory. Longtime and renowned JAX researcher Elizabeth 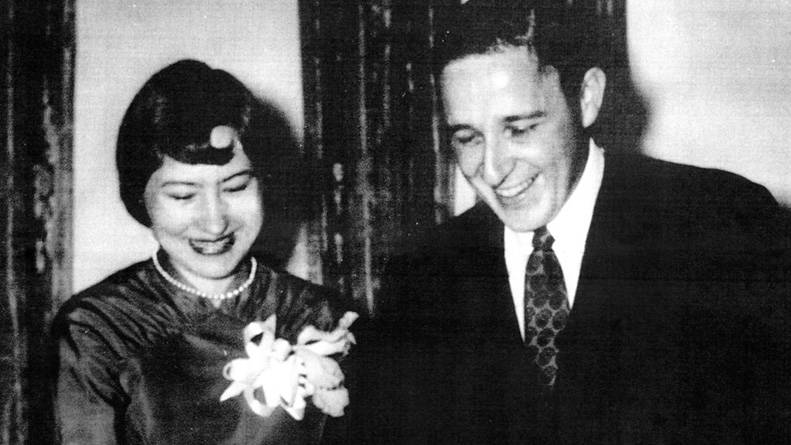 Silvers met his wife-to-be Abigail Adams at JAX, and their wedding cake had a mouse decoration on top. Abigail Silvers went on to graduate from the University of Pennsylvania Medical School and her successful medical career included an appointment as medical director of cancer programs at The Bryn Mawr Hospital.

"I've had one of the most fabulous lives of anybody," says Willys Kent Silvers, Sr., Ph.D. "And when you get down to it, it's all due to my association with The Jackson Laboratory."

In that case, The Jackson Laboratory has a lot of which to be proud. Silvers has had a distinguished career in biomedical research and academic leadership, including 31 years at the University of Pennsylvania and decades of service to the Laboratory. One of his books is still a go-to classic of scientific literature.

Silvers likes to point out that he was born in 1929, the year of The Jackson Laboratory's founding. He graduated from high school in 1946, "right when all the veterans from World War II returned," he says, so when he enrolled at Johns Hopkins University as a premed student, most of his classmates were older men attending on the G.I. bill. "College was not a joyful experience," he says.

One day during his junior year, on his way out of the biology building for the day, Silvers noticed a flyer promoting The Jackson Laboratory's Summer Student Program. "I thought, gee whiz, this sounds like a nice way to spend the summer," he reminisces, "and it will probably help me get into med school, so why not look into it?

"Seeing that flyer was the first miracle!" he exclaims.

Silvers spent the summer of 1949 as a Jackson Laboratory intern, assisting psychologist Joseph Royce with his behavioral studies of dogs. The following summer he won a scholarship for another summer at JAX, "not because of the outstanding research I had done," Silvers says with a chuckle, "but because I was always willing to volunteer to help wash the dishes in the central dining hall!"

During his years at The Jackson Laboratory, Silvers says, "I met two of my best, lifelong friends," Henry J. Winn, Ph.D., and Lloyd Guth, M.D. Guth is an eminent neuroscientist and a pioneer in the study of spinal cord injuries at the NIH, University of Maryland and College of William and Mary; Winn, an immunologist, was on the JAX faculty before joining the surgery department at Massachusetts General Hospital.

I've had one of the most fabulous lives of anybody…When you get down to it, it's all due to my association with The Jackson Laboratory.

Silvers got to know Jackson Laboratory founder and then-director C.C. Little. "I adored 'Prexy,' as everyone called him. He was definitely a very positive figure in my life. Indeed, he told me I reminded him of himself when he was younger. He was an exceedingly charming individual and always willing to spend time with me."

C.C. Little's grandson, Philadelphia architect and Jackson Laboratory Trustee Sam R. Little, has known Silvers for many years. "When I first became involved with the Laboratory, Willys cared that I should know what made the place so special. With his very personal recollections of the close-knit scientists, the excitement of the work they were doing, and how it changed his life, Willys made the earlier days come alive for me. It also speaks of the legacy which now helps give the Lab its promise for the future."

That second summer Silvers worked in the laboratory of the legendary Elizabeth "Tibby" Russell, whose contributions include the first successful bone marrow transplantations in mice to cure anemia. But it was at the end of that summer that Russell's mentoring really kicked in.

"I had not been accepted to medical school, and I really didn't know what I was going to do," he recounts. "And Tibby suggested I apply to the zoology department at the University of Chicago, where she had received her graduate degree. And somehow she was able to get me accepted!"

Silvers became a student of Sewall Wright, Russell's mentor. Together with C.C. Little, Wright had been a student of William Castle's at Harvard's Bussey Institute—a veritable "who's who" of 20th century American mammalian genetics.

Silvers earned his Ph.D. from the University of Chicago, conducting his thesis research at JAX in Russell's laboratory. While Russell's research at the time was primarily in hematology and germ cell genesis, she continued her early work in pigment cell genetics as a kind of "hobby." And, Silvers says, "although my research eventually became more focused in transplantation immunology, I too had a lifelong interest in pigment cell genetics, starting with my dissertation."

During that time Russell had a summer student named David Baltimore, who along with another JAX student that summer, Howard Temin, would go on to win the 1975 Nobel Prize in Physiology or Medicine. "Tibby asked me to supervise David, but he was so bright he didn't need any help," Silvers recalls.

Silvers' association with Russell was also responsible for the next step in his career: an NIH postdoctoral fellowship at Brown University with Herman B. Chase, one of Russell's former University of Chicago classmates under Sewall Wright.

Next came what Silvers calls "another miracle." In the summer of 1956, he returned to Bar Harbor to finish his postdoctoral training in Russell's lab. "A young woman named Abigail Adams, who had just graduated from Mount Holyoke, was spending her second summer as Tibby's student," he recounts fondly. "Towards the end of the summer, I asked her out for a date, and a few weeks later I proposed to her."

However, Adams had been accepted at UPenn Medical School, and in the 1950s med school and marriage didn't generally mix, especially for female students. Silvers finally persuaded her to choose marriage just a few weeks before she was due to start her first classes. "But it was soon obvious to me that my bride was exceedingly unhappy in giving up medical school." Soon Silvers accepted a staff position at The Jackson Laboratory, again in Russell's lab, and his wife was accepted at the University of Vermont School of Medicine, the young couple resigning themselves to a long-distance relationship.

But in the spring of 1957, right on schedule, yet "another miracle." Rupert Billingham, whom Silvers had first met during his postdoc years, offered Silvers a position at The Wistar Institute in Philadelphia, and Abigail Silvers was accepted at the University of Pennsylvania Medical School right across the street from the Wistar. She, who was one of only six women in a class of 125, excelled in her studies, completing her internship at The Bryn Mawr Hospital and becoming board certified in internal medicine, hematology and oncology.

While building their careers in Pennsylvania, the couple also had two children, daughter Deborah and son Kent.

"In my three decades at Penn," Silvers says, "what I enjoyed most was my association with students, and I was chair of the genetics graduate program for 12 years." It's not hard to imagine the extroverted Silvers as an outstanding teacher; he won the university's Mary F. Lindback Award for Distinguished Teaching, and a Dean's Award in Graduate Teaching.

In 1971, Silvers published a book, The Immunobiology of Transplantation, with Rupert Billingham. Around 1975, Silvers was asked to compile a list of genes affecting coat color in mice, his lifelong research "hobby." "I realized it had been years since anybody had written a review article on the subject, and that was ‘The Coat Color Genes in Rodents and Carnivores' by C.C. Little in 1958.

Once Silvers wrote the review article and compiled the list of genes, he realized he had a book's worth of material. He sent the manuscript to scientific publisher Springer Verlag. The publisher in turn sent the book to the top expert in the field for review: none other than Elizabeth Russell. "She gave it a great review!" Silvers says. The book was so successful that after 35 years, Silvers' Coat Colors of Mice is still in demand and is now available on The Jackson Laboratory's website.

"My primary research interests have been pigment cell biology and transplantation biology, and I'm proud to have written books on both subjects," Silvers says.

Silvers retired from the University of Pennsylvania in 1996, but continued to do research at the Fox Chase Cancer Center, also in Philadelphia, as a visiting scientist. There he collaborated with Beatrice Mintz, Ph.D., whom he had met at The Jackson Laboratory when she was a summer investigator in Tibby Russell's lab. Silvers' work with Mintz focused on the development and treatment of melanomas.

In 2004 Silvers terminated his research efforts when his wife was diagnosed with lung cancer. Despite her own illness, she was active as medical director of Hospice, counseling other cancer patients. She died in 2005.

Abigail Silvers had a distinguished career as an oncologist and hematologist in private practice and in academic and leadership posts, including medical director of cancer programs at The Bryn Mawr Hospital and clinical assistant professor of medicine at Thomas Jefferson University.

Silvers now lives in Gladwyne, Penn., with his daughter and son-in-law (and his 13-year-old toy poodle, Gigi). Their house includes a gallery exhibiting the collection of Pennsylvania (New Hope School) Impressionist paintings that Will and Abigail Silvers assembled starting in the 1980s.

In his younger years, Silvers, like many mouse genetics researchers, collected pictures of mice. He and his wife donated his first art collection—including original prints by John James Audubon depicting different species of mice, rats and other small mammals—to The Jackson Laboratory, where they now grace the library and North Research Building of the Bar Harbor campus. The Silvers have also been philanthropic supporters of the Laboratory, including establishing the Elizabeth Russell Scholarship Fund.

In reminiscing about his lifelong connection to Bar Harbor, Silvers says, "from summer student to the chairman of the Board of Scientific Overseers, I don't think anyone else has been in as many different positions at The Jackson Laboratory.

"And it all started when I saw that summer student notice when I was a junior at Hopkins. A notice that, because it luckily caught my eye, resulted in a graduate degree, a productive research program, a wonderful wife, two wonderful ‘F-1s' [genetics-speak for offspring] and wonderful friends. A fabulous life indeed!"