The genetics of lupus 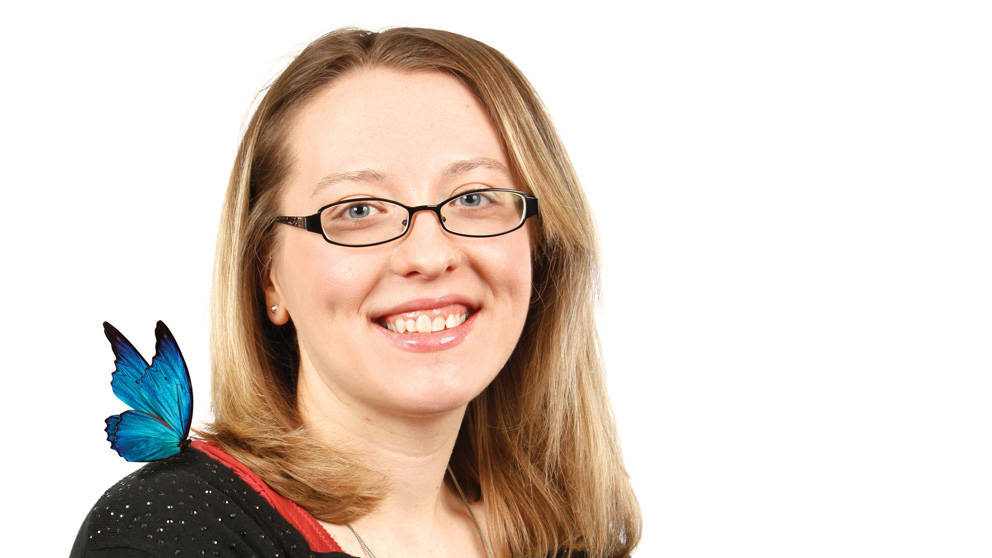 Lupus is one of the most enigmatic of diseases. It can take years to diagnose, marked as it is by a laundry list of seemingly unrelated symptoms: fever, fatigue, rashes, hair loss, sensitivity to light, seizures and even psychosis. Nearly 2 million Americans have some form of lupus, an autoimmune disorder in which the immune system wages war on the body's own cells and tissues. More than 90 percent of those who suffer from it are women, and there is no cure.

Elisabeth Adkins, a doctoral student at the Tufts Graduate School of Biomedical Sciences in Boston, is trying to decode the genetic underpinnings of the disease, a crucial step in combatting it. She's working in the lab of Derry Roopenian, a clinical professor at Tufts School of Medicine and a professor at The Jackson Laboratory, and is the first student to take advantage of the mammalian genetics "JAX track," a joint program of the Tufts Graduate School of Biomedical Sciences and JAX. The program, launched in 2011, offers students in Tufts' genetics program—which emphasizes human disease—in-depth training in mammalian genetics, an increasingly recognized need in biomedical research.

As the first JAX track student, she is really setting a high bar for everyone else. Established as a cancer research center in 1929, The Jackson Laboratory is famous for its mice. It maintains a "library" of special strains of mice that make it easy to study certain diseases in humans. The type of mice that Adkins and Roopenian use arose accidentally, through mutation; they begin to exhibit lupus-like symptoms by the time they are four weeks old. It's a lesser-known strain of mice, but a potentially promising one. "We think it's one of the better models," says Adkins, who received a 2013 Gina M. Finzi Memorial Student Summer Fellowship from the Lupus Foundation to support her research. "We see a lot of the same indicators [in these mice] that human lupus patients have."

One such indicator is kidney failure, something that human lupus patients often died of before steroids were used to manage the disease. Adkins' mutant mice die of kidney failure before they are eight months old. The normal life span of mice is two to three years.

With Roopenian as her mentor, Adkins is studying these doomed mutant mice to figure out the mechanisms behind the onset of disease. The mutation causes the mice to produce too much of a protein called interleukin 21, or IL21. Roopenian's team has known for a while that this protein has something to do with lupus. Normally, it helps the immune system respond to infections. But the scientists found that, when produced in excess as it is in their strain of mutant mice, IL21 leads to the symptoms of lupus.

As the first JAX track student, she is really setting a high bar for everyone else.

"It turned out that it wasn't just lupus, but many other autoimmune disorders, too," says Roopenian. "We focus on lupus so we aren't going in 20 different directions at a time."

Now Adkins is studying the specific immunity cells (a subset of T helper cells) that produce the protein. Her goal is to figure out exactly how IL21 contributes to lupus, how it's produced and how it functions. Her work has already led to one significant finding.

Adkins found that these cells exist in healthy mice, even when they are not undergoing an active immune response. "That was a surprise. No one would have expected that," says Roopenian.

Next, the scientists want to figure out how those cells develop in normal mice, information that could illuminate what exactly goes wrong when lupus occurs. That would not only open the door to new therapies; it could have diagnostic value, too.

"Historically, lupus has been extremely hard to diagnose. A lot of our effort is to understand the mechanisms much better so it will be easier to predict when people are showing early signs of it," says Roopenian.

It was serendipity that put Adkins, who has been interested in science and medicine since high school, on the JAX track in 2011. After studying genetics as an undergraduate at Central Connecticut State University, she knew she wanted pursue a Ph.D., but she wasn't sure if she wanted to focus on genetics or immunity. The mammalian genetics program allowed her to marry her two interests. The JAX track, she says, also gives her access to the breadth of research at Tufts and the depth of genetic expertise at The Jackson Laboratory.

"It's nice to have the two names together," she says of the new program. "It adds more weight to what I'm doing."