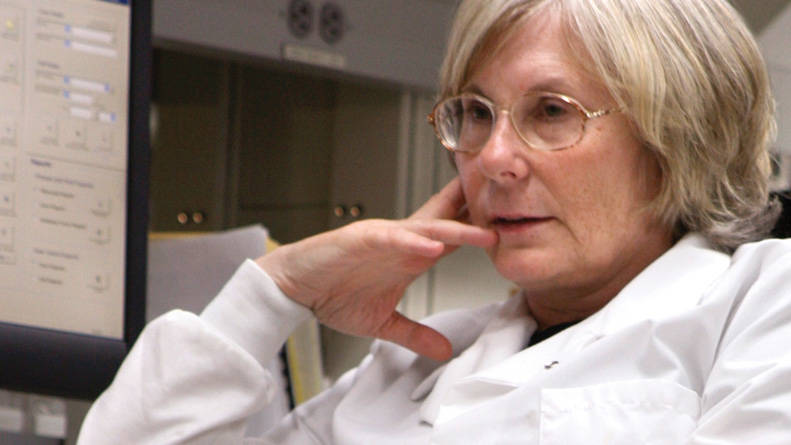 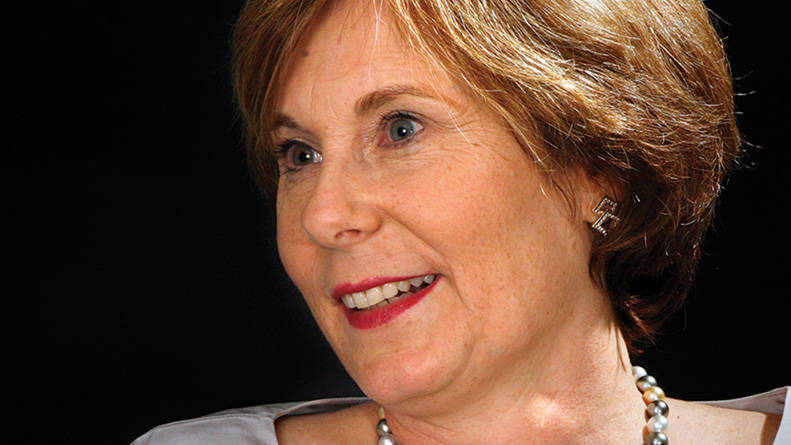 Janeway has contributed greatly to the Laboratory's recent growth. 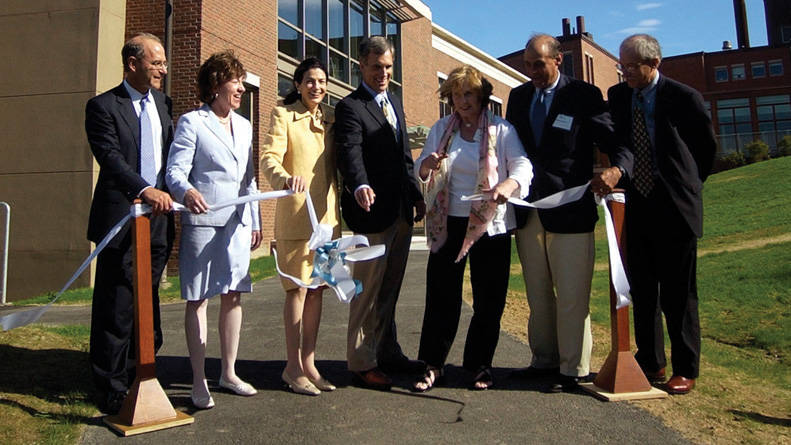 Janeway was joined by Maine's leading politicians for the ribbon cutting for the Lab's East Research Building (above left, third from the right). 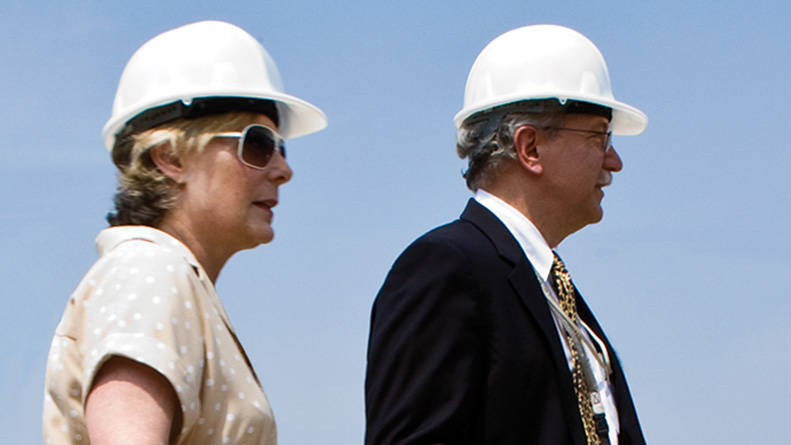 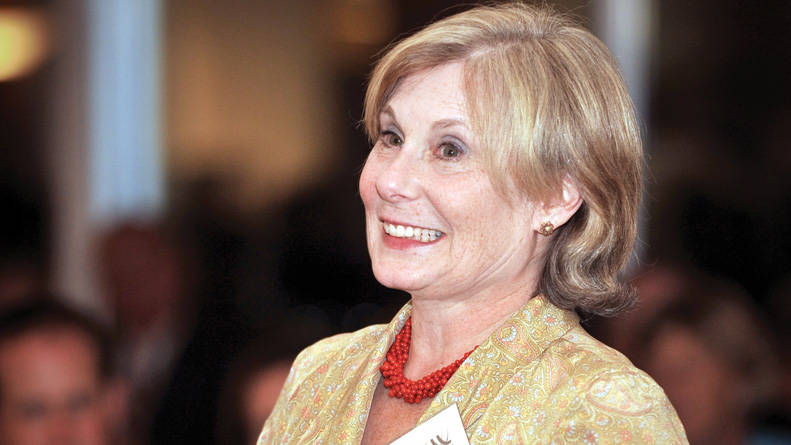 Janeway received the 2009 Chairman's Award at the Laboratory's Annual Meeting for her many contributions to JAX.

At a recent board meeting in New York City, Janeway, the vice-chair, was everywhere—checking in with organizers in the lobby, debating one-on-one between sessions in the main meeting room, taking part in an animated lunch-table discussion.

"Weslie Janeway is a remarkable individual—simply one-of-a-kind," says President and CEO Edison Liu, M.D. "She is a philanthropist-turned-scientist, and her contributions to JAX have been enormous. As CEO, I have relied on her keen sense of observation and her sage advice on many matters related to Laboratory management. Her intellect, her generosity and her sense of style leave a lasting impression."

We cannot just sit back and wait for the government to fully fund science.

At the end of a long day of providing and processing information at the board meeting, Janeway shared her views on science, philanthropy and the future of The Jackson Laboratory.

Janeway is originally from Rhode Island, but her family has summered in coastal Maine for decades. Like many seasonal residents, she was aware of the Laboratory's presence in the area but knew little about it.

"I had heard The Jackson Laboratory was an economic engine for Hancock County, but I didn't know much more than that, except about the mouse-production business that so many people think of," she said. But in 2002, Dr. Ann Hirschhorn—a longtime friend, JAX board member and alumna of the JAX Summer Student Program—brought her to visit the Bar Harbor campus, where she learned about the important genetic discoveries taking place there.

"It became apparent to me right away that if you're going to be part of Hancock County, you should really be part of the Laboratory," she says. "I wish more people felt that way."

She has served on the JAX Board of Trustees since that time, and her generous giving has supported essential growth at the Laboratory, including a 2009 leadership donation to fund new research positions.

After joining the board, Janeway made it her business to learn more about the world of research. In 2006, when she and her husband, the economist William Janeway, moved to England, she entered genetics research. Given her growing interest in the work taking place at The Jackson Laboratory, she said, a science education "just seemed like the right thing to do." Janeway's earlier education includes a bachelor's degree in political science from Barnard College and a master's degree from Brown University, also in political science.

Later, in 2009, Janeway spent an absorbing summer at JAX, studying cytogenetics with James Denegre, Ph.D., who at the time was the senior manager for imaging sciences and worked in the windowless lower levels of the Bar Harbor campus. Janeway refers to it as "the summer of the basement" and recalls it as a deeply rewarding experience.

"I learned a great deal," she says. "In Cambridge, we had developed stem cell lines with somewhat damaged chromosomes. At JAX, we regressed those stem cells to determine how meaningful the chromosomal alterations were. We learned that the cell lines were still viable despite the changes."

That summer, Janeway's respect for The Jackson Laboratory deepened. She especially enjoyed her working relationship with cytogenetic technologist Ellen Akeson, whom she calls "one of the many people at the Laboratory who is doing amazing work—she is really a national treasure."

Weslie Janeway is a remarkable individual—simply one-of-a-kind. Her intellect, generosity and sense of style leave a lasting impression.

"I was asked if I would take her on as an intern," he says. "All I knew was that she was a trustee with some scientific background. Then I learned she had been studying with Roger Pederson, and my respect notched way up. She has a very inquisitive mind, and she was committed to completing her study."

Janeway, a dedicated supporter of science and culture, believes public support for scientific research is essential, the way it is for schools, highways and healthcare.

"There are things a just society should provide for people," she says. "Privatization and entrepreneurship are often held up as panaceas for financing our institutions, but they're not always the answer."

However, she adds, "We cannot just sit back and wait for the government to fully fund science. Government agencies are, by their nature, risk-averse. We need private philanthropy to support more promising young investigators and to fund our overhead costs."

While commercialization of some JAX discoveries may yield important revenues, Janeway says private philanthropy will remain an essential funding source as the Laboratory heads into a future that includes expansion into clinical genomics. She recognizes that there are steep philanthropic challenges ahead, especially with recent fluctuations in the national and world economies.

"People who serve on charitable boards are there to forward the mission of their institutions," she says. "But with changing economic times come changing pressures and competing interests for philanthropic dollars."

For example, she says, "A lot of younger philanthropists really like the idea of direct, grassroots investment in specific disease areas of research. But the institutions backing those operations are only as stable as the founder. When that person moves on or changes focus, the funding is lost."

Even in tough economic times, she notes, wealth changes hands from one generation to the next, and many aging philanthropists elect to channel some of their resources to causes that inspire them rather than to their families.

"There is really a lot of opportunity now, some of it from unlikely sources," she says.

Janeway says JAX is positioned for growth at a crucial moment in scientific and medical discovery, and generous, consistent philanthropic support is key to maintaining momentum and relevance. The challenge before the Laboratory, she says, is to attract high-level giving that supports not only the exciting new work of clinical genomics, but also the basic research that has been the JAX hallmark for eight decades.

"It's easy to get focused on clinical research at the expense of basic science," she says. "There's no doubt that translational science is the future of genetics, but it's important to maintain our leadership in basic research, too. Our move into clinical genomics presents us with great challenges and great opportunities. But for basic research or translational science, there will always be an important place for quality institutions like The Jackson Laboratory."