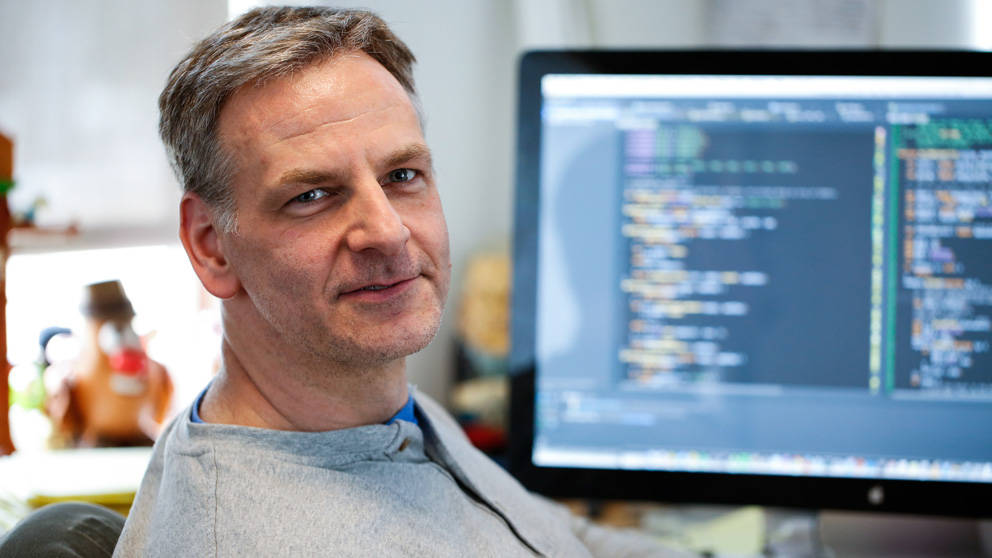 Q: What did you do before coming to JAX?

A: I grew up in southern Maine—Kittery Point—and graduated from the University of Maine with a computer science degree and math minor. During my education I gravitated toward scientific applications, not business, and after working at the University of Southern Maine for a couple of years in data processing, I came to the Lab in 1992 when an opportunity opened to write database applications. I became very interested in the research and took the Genetics course here, then moved to Mouse Genome Informatics (MGI), the online database and bioinformatics resource hosted by JAX, for the first time after a couple of years and helped design their first web interface.

Q: Did you work with MGI until you moved to scientific computing?

A: No, in 1996 I moved to Boston to work for a startup company. That began a time when I worked for five companies in about eight years. Startups folded, I was at Nortel when they closed a facility and laid off the entire staff. It became pretty difficult. It was good to come back and rejoin MGI.

Q: What does scientific computing do?

A: Our job is to be faculty focused. We build tools that help faculty do their research, developing and programming the kinds of applications and databases that you can't buy off the shelf.

Q: What are some specific examples?

A: We are optimizing high-performance computing clusters to help faculty work with massive data sets, developing small databases and web interfaces, developing image-analysis tools, helping researchers visualize data, and a lot more. There are six of us in the group now, and we work on a wide variety of projects.

Q: How did you get into that kind of work?

A: You might say I lucked into it, but I ended up where I want to be. I enjoyed working in MGI, but then computational sciences saw the need to automate data analysis and sharing for faculty, and I was hired to do that. It grew from there, and I find the work very fun and interesting. There are new projects all the time, I get to meet new faculty and solve different problems. Maybe it's that I have the right job for someone with a short attention span!

Q: Why is data visualization important, and what are the challenges involved?

A: Data visualization is a growing area. Researchers are generating these huge data sets that are hard to work with, and visualization tools help them get a better handle on them. The biggest challenge is to simplify the data readout and help the PI get started. For one of the projects we're making simple, reusable visualization tools that work on the web, allowing easy sharing of data with collaborators. We try to make tools instead of one-off fixes—making it generalizable is a fun part of the job.