A magic tool for gene editing and regulation

Tired of spending two years or longer making a mutant mouse? How does one month sound? With the CRISPR/Cas system, it is no longer a fantasy to generate genetically engineered mice within weeks.

CRISPR (clustered regularly interspaced short palindromic repeat) and Cas (CRISPR-associated) proteins are part of an RNA-based adaptive immune system used by bacteria and archaea to detect and destroy invading viruses and plasmids (Horvath and Barrangou, 2010; Wiedenheft et al., 2012). Recently, a platform based on the Cas9 endonuclease from Streptococcus pyogenes has been developed that can be programmed to produce a sequence-specific double-stranded break (DSB) in vitro by providing a synthetic single-guide RNA (sgRNA) that targets the nuclease to a desired DNA sequence (Jinek et al., 2012). More intriguingly, it is reported that Cas9 and sgRNA are the only components necessary for induction of targeted DNA cleavage in cultured human cells (Cho et al., 2013; Cong et al., 2013; Mali et al., 2013).

Rudolph Jaenisch and colleagues at the Whitehead Institute recently demonstrated that one can use the CRISPR/Cas9 system to create mice carrying mutations in multiple genes or even reporters and conditional alleles in one step (Wang et al., 2013; Yang et al., 2013).

Simultaneous targeting up to five genes in ES cells

Traditionally, it is costly and time consuming to produce a single-gene knockout and even more so to make a double knockout. Haoyi Wang et al. explored the possibility of making multiple gene knockout mice in one step using the CRISPR/Cas9 system. In their revolutionary study, they designed sgRNAs targeting the Ten-eleven translocation (Tet) family members, Tet1, Tet2, and Tet3, and co-transfected ES cells with the constructs expressing Cas9 and all three sgRNAs (Figure 1A). Of 96 clones screened, 20 clones were identified as having mutations in all six alleles of the three genes. They then subcloned and sequenced the PCR products of Tet1-, Tet2- and Tet3-targeted regions to verify that tested clones carried bi-allelic mutations in all three genes. Most clones displayed two mutant alleles for each gene with small insertions or deletions at the target site. Furthermore, they verified that the function of Tet proteins was significantly reduced in all clones carrying bi-allelic mutations. Strikingly, it only took them two weeks to get the clone.

To further test the potential of multiplexed gene targeting by the CRISPR/Cas9 system, they designed sgRNAs targeting two Y-linked genes, Sry and Uty. PCR products encoding sgRNAs targeting all five genes (Tet1, Tet2, Tet3, Sry, and Uty) were pooled and co-transfected with Cas9 into ES cells. Of 96 clones that were screened, 10% carried mutations in all eight alleles of the five genes, demonstrating the capacity of the CRISPR/Cas9 system for highly efficient multiplexed gene targeting.

They started with the single mutation by co-injecting embryos with Cas9 mRNA and sgRNAs targeting either Tet1 or Tet2. Blastocysts derived from the injected embryos were transplanted into pseudopregnant female mice. Approximately 10% of the transferred blastocysts developed to birth. RFLP, Southern blot and sequencing analysis demonstrated that 50 - 90% of the postnatal mice carried bi-allelic mutations in either target gene.

The authors next created Tet1/Tet2 double-mutant mice from single embryos by co-injecting Tet1 and Tet2 sgRNAs with Cas9 mRNA into zygotes (Figure 1B). A total of 28 pups were born from 144 embryos transferred into pseudopregnant females (21% live-birth rate). As before, RFLP, Southern blot analysis and sequencing were used to identify 22 mice carrying targeted mutations at all four alleles of the Tet1 and Tet2 genes. These results demonstrate that postnatal mice carrying bi-allelic mutations in two different genes can be generated within one month with high efficiency. 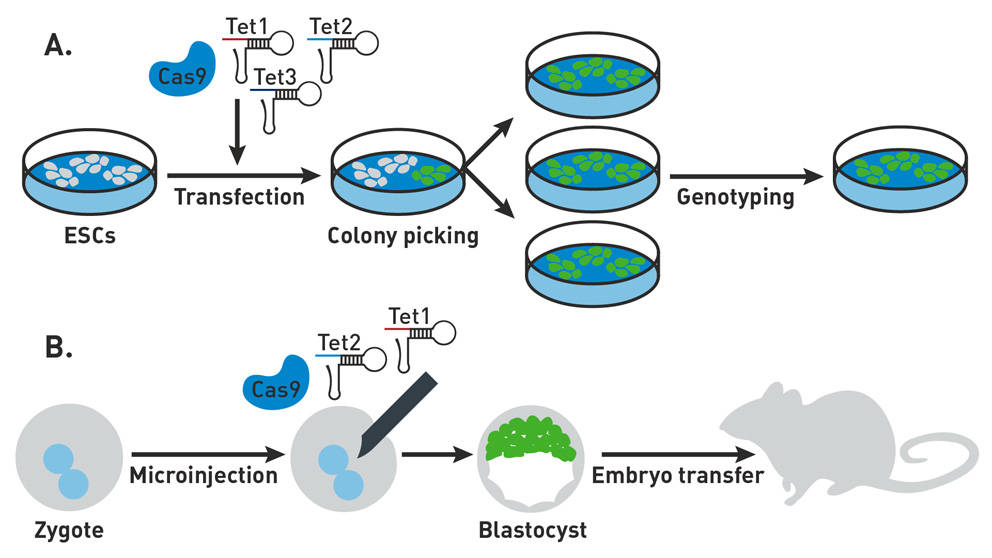 The same group further demonstrated that the CRISPR/Cas9 system can be used to generate reporter and conditional mutant mice (Yang et al., 2013). In their study, reporters of different sizes were achieved using one-step insertions of a short epitope or longer fluorescent tags into precise genomic locations. Mice and embryos carrying reporter constructs in the Sox2, the Nanog and the Oct4 gene were derived from zygotes co-injected with Cas9 mRNA, different sgRNAs and DNA vectors.

Conditional mutant mice with loxP alleles flanking the Mecp2 gene were created by zygote injection of sgRNAs targeting Mecp2 intron 2 and intron 3. A total of 98 embryos were generated and 75% of them carried loxP sites on either Mecp2 intron 2 or intron 3. Importantly, 16 out of 98 mice generated were tested containing two loxP sites flanking exon 3 on the same allele.

CRISPR/Cas-mediated genome editing represents an efficient and simple method of generating sophisticated genetic modifications in mice, the principle of which could be directly adapted to other mammalian species. In fact, rarely has a new technology generated this level of enthusiasm and interest as CRISPR/Cas, this genomic editing and regulating tool has the potential for advancing genetic research, gene therapy and personalized medicine.