Chronic obstructive pulmonary disease (COPD) and pulmonary fibrosis are leading causes of death worldwide. In both diseases, progressive destruction of the oxygen exchange airways contributes to the pathology and practical, effective treatments are not available. New therapies, however, may be on the horizon. In a paper in Nature, a research team led by Drs. Wa Xian and Frank McKeon, professors at The Jackson Laboratory for Genomic Medicine, Farmington, Conn., identified a population of distal airway stem cells (DASCs) that rapidly proliferate, expand and assemble into nascent alveoli in response to sublethal H1N1 influenza infection and the resulting lung damage (Zuo et al. 2014). These DASCs may lead to stem cell-based therapies for treating acute and chronic lung diseases. 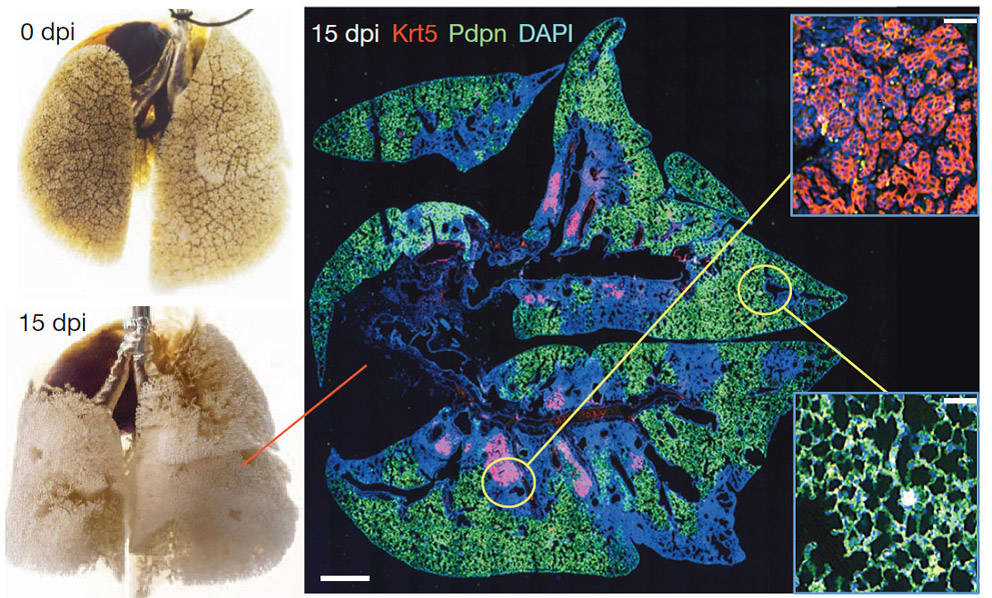 To do the analysis, the Tg(KRT5-CreERT2) ROSA26-lsl-lacZ mice first were treated with tamoxifen and subsequently infected intratracheally with H1N1 influenza virus. Tracing begun in lungs prior to infection and continued through the cycle of lung damage and resolution. By nine days post-infection (dpi), subtle LacZ activity is observed in the airways of the mice, which becomes robust by 15 dpi. By 60 dpi, robust signals are distributed along the conducting airways and the surrounding interstitial regions, suggesting a progressive process. Importantly, no LacZ activity is detected in the lungs of tamoxifen-treated mice in the absence of infection, indicating that the robust signal observed is specifically induced by lung damage.

To understand the role of DASCsp63/Krt5 in lung regeneration and functional recovery, the Xian/McKeon group sought to conditionally ablate these cells by engineering a transgenic mouse that expressed the human diphtheria toxin receptor (DTR) under the regulation of the Krt6 promoter (Krt6-DTR). The Krt6 promoter was chosen over the Krt5 and Trp63 promoters because Krt6 is expressed specifically in DASCs at 8-10 dpi, whereas Krt5 and Trp63 are expressed in stem cells of many stratified epithelia. DTR expression in Krt6-DTR mice renders their DASCsp63/Krt5 sensitive to diphtheria toxin ablation. Accordingly, Krt6-DTR transgenic mice were infected with H1N1 virus and injected with diphtheria toxin at 8 dpi. By 15 dpi, the exposure to toxin results in rapid loss of Krt5+ and Krt6+ cells from interstitial clusters (90% and 99% reduction, respectively). The investigators then evaluated the effect of DASCp63/Krt5 ablation on lung regeneration. Virus-infected and toxin-treated Krt6-DTR mice show persistent damage in the lung, indicated by prolonged leukocyte infiltration and the absence of a normal alveoli gene expression signature. These mice also display a decline in pulmonary function assessed by pulse oximetry; their peripheral capillary oxygen saturation (SpO2) only recovers to 75% of the baseline level at 40 dpi, whereas that of control mice recovers to 90%. Histological studies and whole-genome expression profiles further indicated that the lungs of DASCp63/Krt5 -ablated, Krt6-DTR mice are more pre-fibrotic. Together, these findings indicate that DASCsp63/Krt5 play an important role in the regeneration and functional recovery of the lung following acute injury.

The next big question the authors addressed is whether DACSs can be cultured in vitro and be used to treat damaged lung in vivo, an essential step toward the development of DASC-based therapies to treat lung disease. In three-dimensional Matrigel cultures, DASCs form unilaminar, alveolar-like spheres composed of cells expressing type I and II pneumocyte markers, and gene-set enrichment analysis revealed a strong coincidence between in vitro-derived DASCs and their in vivo counterparts. To determine whether cultured DACSs can promote lung regeneration in vivo, single-cell-derived pedigrees of lacZ-expressing DASCs (DASCsLacZ ) isolated from the lungs of Krt6-DTR mice were generated and delivered to syngeneic mice five days after H1N1 infection. At 40 dpi, DASCsLacZ distribute to interstitial regions emanating from airways, and by 90 dpi, DASCsLacZ show a homogenous pattern in interstitial spaces. Notably, at least 80% of the LacZ-positive cells in bronchiolar regions express the secretory cell marker CC10. Gene expression analysis of the LacZ-positive regions of the lungs reveals a typical alveoli gene signature distinct from that of the immature DASCs or of the damaged lung.

Together, these results indicate that single-cell-derived pedigree DASC lines can readily integrate into the damaged lung during regeneration and give rise to multiple epithelial cell types of both bronchioles and alveoli. This significant work highlights the remarkable regenerative capacity of the lung following acute and large-scale injury and reveals a potential therapeutic strategy for treating lung-damaging diseases utilizing DASCs.