A highly innovative new technique has been published in Cell (Yang et al. 2014) that renders whole organs, and even an entire mouse, optically transparent. This amazing new development allows enhanced three-dimensional imaging of fluorescently labeled cells within multiple organs. The approach maintains protein content and structural integrity while allowing penetration by both micro- and macromolecules used for intracellular and extracellular labeling. Yang et al. demonstrated imaging from cells expressing fluorescent transgenes as well as labeling by viral transduction, small molecules, mRNA probes and antibodies. Using this approach, researchers will be able to build a “connectome” to understand the structural relationships between cell populations in both normal and pathological conditions.

Graphical abstract of perfusion-assisted agent release (PARS) in the whole body of a mouse to clarify tissues surrounding fluorescently labeled cells. The method enables construction of three-dimensional maps of tissues and organs to better understand the structure-function relationships within and between mammalian organs in both normal and pathological conditions.

Over several decades, researchers have developed a number of important techniques to make tissues optically transparent with the goal to better understand the structural anatomy and biochemical relationships between cells within organs and tissues. The work by Yang et al. is built upon many of these ground-breaking techniques. The approach developed by these investigators is of high value because it is not only broadly applicable to multiple organs and tissues while retaining protein content and structural relationships (both cellular and subcellular), but also compatible with endogenous fluorescent protein expression as well as labeling post clearance with a wide range of labeling methods.

Initial experiments began with 3mm thick sections of brain tissue using mice expressing yellow fluorescent protein (YFP) from the thymus cell antigen 1 (Thy1) promoter. This strain, B6.Cg-Tg(Thy1-YFP)HJrs/J (003782), expresses high levels of YFP in motor and sensory neurons, as well as subsets of central neurons. The initial goal was to identify the conditions that would create the optimal crosslinking density to allow both extraction of lipid molecules and penetration of immunohistochemical reagents. They found that using a solution containing 4% acrylamide but not formaldehyde and bis-acrylamide (the latter two used in an alternative method) formed optimal tissue-hydrogel matrices that showed: (1) high 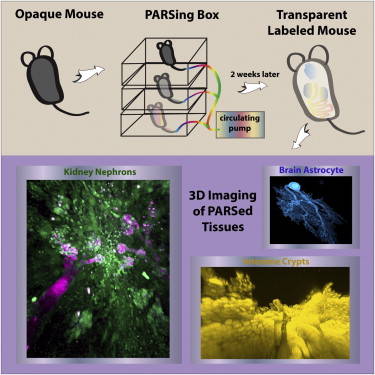 retention of total protein, (2) efficient removal of lipids with mild detergents that led to optical transparency, (3) retention of endogenous fluorescence, and (4) faster and deeper penetration of immunoglobulins (IgG). This initial stage of the preparation was termed PACT, for passive clarity technique. One concerning side effect of this treatment was a significant increase in tissue weight and volume. However, when the tissues were placed in mounting and preservation media called RIMS (refractive index mounting media), the samples returned to their original size. The authors ensured this expansion and contraction did not alter structural relationships by comparing thin sections of PACT cleared brain to uncleared formalin fixed tissue and found no difference. The PACT cleared samples were also amenable to Nissl staining, mRNA probes using small molecule FISH, as well as primary and secondary antibody labeling for both membrane and cytosolic proteins. Broad utility of PACT to other organs and tissues was demonstrated by similar results obtained with mouse kidney, heart, lung, and intestine, and a human tumor biopsy sample.

Limitations to single organ PACT clearing of tissues include the slow nature of the process due to the use of passive diffusion of the reagents and the inability to develop a connectome of structures between different organs. The latter limitation is particularly important for understanding the connectivity between the nervous system and peripheral organs and tissues. These issues were addressed by developing a method called PARS, or perfusion-assisted agent release, where the reagents were delivered using a closed loop, multi-day perfusion system using either the cerebrospinal or vascular circulation. Using the cerebrospinal circulation, the authors obtained modest whole-brain clearing in as short as 4 days and clearance of the spinal cord in 2 weeks. Using the vascular system and inclusion of a pressure gradient, they obtained clearing of all major organs in 1 week and the nervous system in 2 weeks. The Thy1-YFP mice enabled creation of three-dimensional images of neurons throughout the brain and spinal cord. Mice in another experiment were infused with an adeno-associated virus engineered to express GFP from a ubiquitous promoter, enabling imaging of both brain and liver. In yet another group of mice, delivery of immunohistochemical reagents allowed imaging of structures within the intestine and kidney. Antibodies to tubulin and DRAQ5 generated detailed images of glomeruli and nephrons in the kidney. In summary, PARS achieved whole-body clearing in the mouse and supported the delivery of reagents necessary for immnofluorescent labeling of structures in situ, enabling the construction of three-dimensional structures within whole organs.

There are a wide range of possible uses for PARS. The neurobiology field has long sought approaches to understand the physical relationships between cell populations within the central nervous system as well as interactions in the peripheral nervous system (i. e. vagus nerve, neuromuscular junctions and nociception) in both normal and disease pathology. Appropriately labeled therapeutic agents (small molecules, immunobiologics, gene therapy vectors, etc.) could quite possibly be tracked to determine both target specificity and off-target toxicity. Labeled metastatic tumor cells could be tracked and evaluated at the cellular and molecular level. Also, adult stem cell therapies and lineage tracing studies could be carefully evaluated in situ, as well as many other scenarios yet to be conceived.

JAX has the tools for connectome phenotyping

The development of connectome imagery will require a combination of immunolabeling and mice with intrinsic fluorescent gene expression. Fortunately, The Jackson Laboratory serves as a repository for a broad collection of cell- and tissue-specific fluorescent reporter mice. This includes reporters knocked into native genes, transgenes engineered with specific promoters driving fluorescent reporter genes, and lines with specific promoters driving the Cre recombinase enzyme that can be bred to the lox-stop-lox fluorescent reporter line of the investigators’ choice (multiple fluorescent colors are available). While these strains provide the normal structural phenotypes, it should be noted that these reporters can be bred to any one of the many mouse models of human disease in the JAX repository to uncover disease related structural phenotypes.