The obligate intracellular protozoan parasite Toxoplasma gondii is estimated to have infected approximately one-third of the world’s population. Like other intracellular organisms, T. gondii is capable of modifying host cells in order to avoid clearance by host cell specific mechanisms and the immune system. During the infection process, T. gondii injects effector (rhoptry) proteins into host cells. The mechanisms by which T. gondii 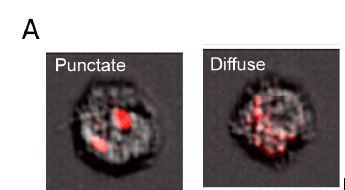 infection leads to Il12 production, which is required for the development of protective immunity, is currently unknown. A recent report in Infection and Immunity (Christian et al. 2014) describes a clever Cre-lox-based fluorescent reporter system for monitoring such host-pathogen interactions.

Previous work demonstrated that a T. gondii strain engineered to inject Cre into host cells could potentially be useful in dissecting the roles of productively infected, phagocytosed and uninfected but injected (U-I) cell populations on the production of Il12.

The frequency of the four cell populations did not differ between macrophages infected with virulent or avirulent T. gondii strains or with different red fluorescent proteins (mCherry or tdTomato), indicating that there are no strain-specific or fluorescent protein effects. Macrophages infected with the tdTomato control strain, which has no Cre transgene, showed no ZsGreen1 expression, demonstrating that Cre reporter expression (ZsGreen1) is specific to Cre-expressing strains and is not induced simply by infection. A closer examination of the cells with mCherry expression but no ZsGreen1 expression shows cells with either punctate (recently infected cells) or diffuse (cells that phagocytosed parasites) mCherry expression. Therefore, this reporter system allows researchers the ability to better understand the mechanisms of host-pathogen interactions that lead to production of Il12.

FACS analysis of cells from the injection site of infected B6.Cg-Gt(ROSA)26Sortm6(CAG-ZsGreen1)Hze/J mice show the same four cell populations that are observed in infected bone marrow macrophages, albeit the ratio of U-I to untouched cells is increased 18 fold. At 3 and 5 days post-infection (dpi) the ZsGreen1 positive cells from the injection site were predominantly dendritic cells (DCs), monocytes and macrophages. The U-I population increases from 3 to 5 dpi, and remains high at 10 dpi. These data indicate that the U-I cells may play an important role in T. gondii infection.

Infected B6.Cg-Gt(ROSA)26Sortm6(CAG-ZsGreen1)Hze/J mice were then used to identify the cellular sources of IL12 (Il-12p40). At the injection site, the Il-12p40-positive cells are predominantly DCs and monocytes. Surprisingly, fewer than 10% of the Il-12p40-positive cells are either infected or show any evidence for having even interacted with T. gondii. Similar results are obtained with infected B6.129-Il12btm1Lky/J (YET40, 006412) mice, which co-express Il-12p40 and EYFP. These results suggest that infection with T. gondii is not an absolute requirement for a cell from an infected mouse to produce Il-12p40. Furthermore, they suggest that a soluble factor, derived either from T. gondii or a host cell, initiates Il-12p40 production.

This new reporter system represents a powerful tool for exploring and tracking host-pathogen cell interactions during infection, clearance and phagocytosis of T. gondii.