Titration of gene trisomy in Down syndrome

Down syndrome (DS) is a condition in which trisomy of chromosome 21 leads to physical and developmental phenotypes and mild to moderate intellectual disabilities. It is relatively common, affecting 1 out of every 1000 births. DS individuals have an increased risk for a number of additional diseases and conditions including cancer, heart disease and dementia. A recent study published in PLoS One (Garcia-Cerro, S. et al. 2014) examined the contribution of trisomic gene Dyrk1a (dual-specificity tyrosine-(Y)-phosphorylation regulated kinase 1a) to the cognitive and morphological phenotypes of the Ts65Dn (B6EiCSN.BLiA-TS(1716)65Dn/J (005252)) DS mouse model. Dyrk1a contributes to normal brain development and adult brain physiology and is one of the candidate genes implicated in the cognitive impairments associated with Down syndrome. Normalization of the Dyrk1a copy number in TS mice from three copies (+/+/+) to two copies (+/+/-) improved working and reference memory and contextual conditioning, and rescued long-term potentiation in the hippocampus. Reduction of Dyrk1a copy number did not affect other DS-related neurological or behavioral abnormalities. This suggests that targeting Dyrk1a in treatment strategies might ameliorate DS-associated learning disabilities. 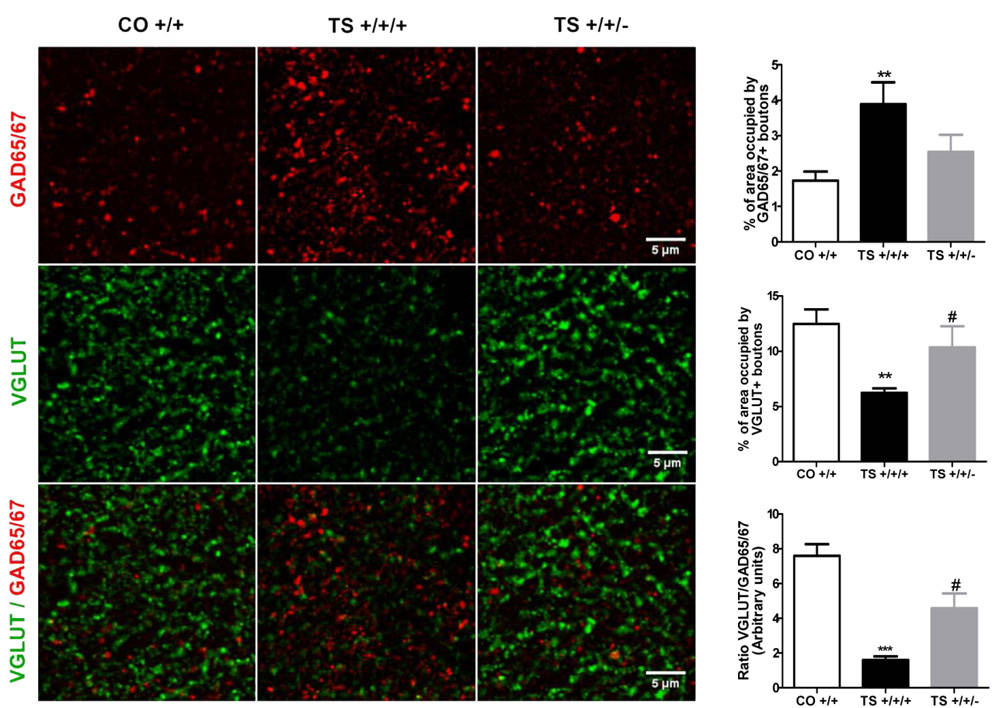 In order to test the effect of Dyrk1a normalization on the cognitive capabilities of TS mice, the researchers measured the responses of TS +/+/+, TS +/+/-, and CO +/+ mice in several behavioral studies. The Morris Water Maze test allows assessment of both working (between-trial performance) and reference (between-session performance) memory by measuring the time it takes for the mice to locate a submerged platform in a tank of opaque water. In most sessions, TS +/+/- mice are quicker to locate the platform compared to TS +/+/+ mice. Further, TS +/+/- mice improve their efficiency in reaching the platform over the course of the trials (p = 0.003) in contrast to TS +/+/+ mice, which do not (p = 0.006). In contextual fear conditioning tests, a second assessment of learning capacity, TS +/+/- mice display an increased freezing time following the shock-associated tone compared to TS +/+/+ mice. Finally, in open field tests, which assess hyperactivity and anxiety in mice, the TS +/+/+ traveled a larger distance around the periphery of the maze (indicating higher anxiety) compared to CO +/+ and TS +/+/- mice. These experiments demonstrate that decreased Dyrk1a dosage in TS +/+/- mice reduces a number of the cognitive and behavioral phenotypes associated with this DS model, including deficits in working memory, fear conditioning, and hyperactivity/anxiety.

The researchers also found that Dyrk1a-normalized TS +/+/- mice have improved proliferation and differentiation of neurons in the hippocampus of adult mice, which is reduced in TS +/+/+ mice compared to CO +/+ controls. Despite changes in the biology of hippocampal neurons in TS +/+/- mice, correction of Dyrk1a dosage in these mice does not rescue decreases in dentate gyrus volume, subgranular zone area, or body weight observed in TS +/+/+ mice. These studies demonstrate that Dyrk1a overexpression plays a role in the cognitive and electrophysiological characteristics of TS +/+/+ mice, but not in other structural or appearance-related phenotypes in this DS model. Dyrk1a and its protein product, therefore, might be a valid therapeutic target to improve DS-associated learning disabilities in affected individuals.