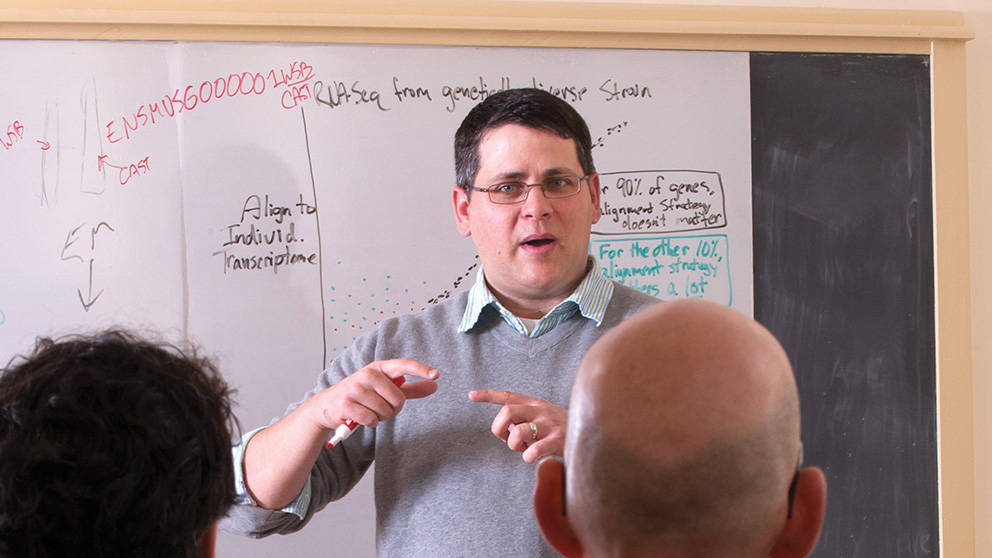 Some of the most important members of The Jackson Laboratory's scientific community are here for only a short time.

Post-doctoral researchers from universities all over the world compete for appointments at JAX, where they will polish their research and lab management skills, submit their findings to scientific journals, and gain practice in writing and managing research grants. They typically spend between three and five years at the Laboratory, then use the skills and connections they've developed here to move on to professional positions at other research institutions and universities.

At any given time, about 40 postdocs work in the laboratories of JAX principal investigators on the Bar Harbor campus. Another 12 or so are at JAX Genomic Medicine in Farmington, Conn., although that number is growing daily as new investigators come on board.

JAX postdocs have access to all the Laboratory's scientific support services, unparalleled mouse and genomic resources, training programs, and numerous courses and conferences centered on research in genomics, genetic diseases and biomedicine. They are paid a modest stipend through a variety of sources: some are Jackson Laboratory fellows, funded by the institution itself; some are paid by their faculty mentors; and others come with their own research funding.

Postdocs are fundamental to the Lab's intellectual fabric and scientific accomplishments... they are our ambassadors to the broader world.

Postdocs are a welcome presence in the laboratories of most JAX investigators, including glaucoma researcher and Professor Simon John, Ph.D.

"These are high-level individuals, in terms of both their intelligence and their skills," he says. "They can and do work independently, but in the best case the relationship with the faculty mentor is a fun, mutually beneficial experience where you're synergizing off each other, challenging each other, and really getting a lot done in a laboratory environment.

"We need them to keep science going," John says. "They are the next generation of competent scientists who cannot only do the science but also run a laboratory."

A case in point is Steven Munger, who for the last two years has been working in the laboratory of Professor Gary Churchill, Ph.D., a statistical geneticist.

Munger earned his undergraduate degree in biology at the University of Michigan in Ann Arbor and completed a Ph.D. in genetics in 2010 at Duke University. He had a wide choice of postdoctoral options.

“I was good in the lab and I had a good grounding in genetics," he says of his formal education. "But what I really wanted to do was to work with large-scale data analysis, and I didn't really have the skill set to do that. So I persuaded Gary Churchill"—whom he had met at several conferences—"to take me on as a postdoc and to help train me in the computational aspects of genetics."

Churchill, he notes, has an international reputation as a leader in bioinformatics, and the postdocs in his laboratory are invariably enthusiastic about their experience working with him.

When he finishes his postdoc appointment, Munger expects to land a teaching position at a major research university. But already he has made important contributions to the scientific community while making progress toward his own professional goals.

Working with Al Simons in the JAX Computational Services group and colleagues in Churchill's lab, Munger has developed a software package, called Seqnature, for constructing individualized diploid genomes for Diversity Outbred mice. This tool allows researchers to more accurately identify regions of the mouse genome that affect the expression of specific genes.

Munger is the lead author of a paper on Seqnature, currently in revision for a major scientific journal, which he presented at the annual meeting of the International Mammalian Genome Society in Salamanca, Spain. Professional papers published in peer-reviewed journals are an essential component of a scientist's CV and a deciding factor when qualifying for independent research funding. Presenting research findings at major scientific gatherings is also a coveted opportunity.

Munger also has seized every opportunity to teach during his fellowship at JAX.

Through his connection with Churchill's group, he has taught computational biology online to gifted high school students at magnet schools in Maine, North Carolina and Georgia. He has lectured Tufts and University of Maine graduate students about RNA-seq and complex trait analyses. He has presented his work at the Genetics Interest Group at the Laboratory and has spoken about high-throughput sequencing and systems genomics at JAX short courses for external investigators. He gave an introductory talk on computational biology to University of Maine undergraduates and lectured at a short course on bioinformatics at the Mount Desert Island Biological Laboratory. Munger also has worked closely with JAX researchers to help them become more familiar with the tools of computational genomics.

"We all need to be doing more, working harder, to educate the public about the importance of the work we do," he says. "It's important to speak to our peers at scientific conferences, but we also need to do whatever we can to elevate the collective scientific literacy of our society."

Bright, ambitious postdocs like Munger are essential to the laboratory's mission and future, says Tom Litwin, vice president for education at The Jackson Laboratory.

"Postdocs are fundamental to the Lab's intellectual fabric and scientific accomplishments," says Litwin. "They are important contributors to the faculty members' labs in which they work and the research they accomplish. While working at JAX, and when they complete their work and leave, they are our ambassadors to the broader world. As our representatives, we take their education very seriously—we want to send them into the world as critical scientific thinkers and talented leaders who capably represent The Jackson Laboratory and the postdoc program itself."

JAX aims to attract bright young postdocs by offering them an enriched learning environment, says Litwin. In addition to the faculty researchers with whom they work most directly, JAX postdocs are encouraged to establish a network of other Laboratory scientists whose work complements their own. They participate in monthly forums on topics ranging from how to write an effective research grant application to ethical considerations in bioscience. They are offered opportunities to teach and mentor others, and they get help in applying for positions at research institutions and universities.

Litwin says it is essential to recruit the most promising young postdocs to The Jackson Laboratory, to provide them with the support they need and to demand their best work.

"If we are good mentors, if we expand and develop their scientific experience in meaningful ways, they will leave here well-positioned for appointments at major scientific and academic institutions," he says. "And they will in turn reflect well on the opportunities JAX offers, encouraging other highly qualified people to apply to our postdoctoral programs."